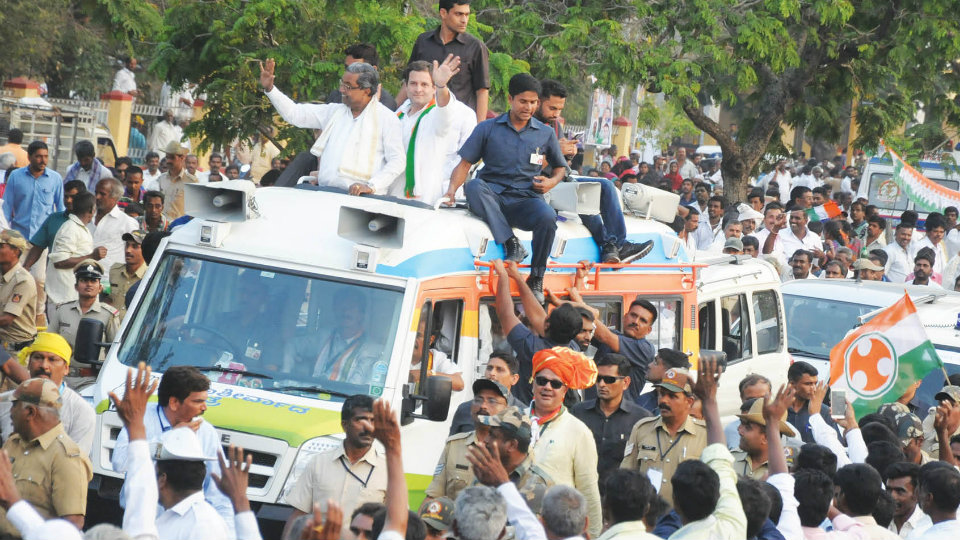 Mysuru:  Ahead of Janashirvad Yatra, Rahul Gandhi held a road show in the city which received good response from the people. The road show started from Gun House Circle and ended at Maharaja’s College Grounds, the venue of the rally.

However, many were unhappy as some people were eagerly awaiting since 3 pm for the AICC President’s arrival at the Town Hall premises for the inauguration of Dr. B.R. Ambedkar’s statue. But a little while after 5 pm, only CM Siddharamaiah and other senior Congress leaders came to the Town Hall to unveil the new statue of Dr. Ambedkar.

In another such instance, thousands of people had thronged Chamaraja Double Road (100 ft. road) to witness Rahul’s rally that commenced from Gun House Circle. Many people thought Rahul would garland Basaveshwara statue at the Circle at the start of his road show. But he came in an open top mini bus to the Circle and started the road show without offering garland or flowers to  the statue.

Congress Corporators Shouqath Pasha, who is also the Secretary of Mysuru Beedi Mazdoor Association (MBMA), had prepared a 6 ft. long garland made of 35,000 beedis to offer it to Rahul Gandhi.

Shouqath and MBMA members were waiting for Rahul’s arrival near CADA office-Chamaraja Double Road junction. Soon as Rahul’s vehicle arrived at the spot, Shouqath and his son approached the vehicle. But Rahul didn’t accept the garland, but just touched it.

Rahul’s road show was marked by artistes playing music, drums and dance on the middle of the road. Flexes, banners, buntings, hoardings and other publicity materials dotted almost all the prominent streets and main thoroughfares of the city. However, a significant number of flexes carried the names of seven rebel JD(S) MLAs who joined the Congress at the rally with prominent among them being B.Z. Zameer Ahmed Khan.

But a couple of flexes welcoming Rahul Gandhi, Zameer Ahmed Khan and Cheluvarayaswamy, were found smeared with black paint. Meanwhile, there were allegations that Congress leaders had brought crowds to the rally after offering money to the people. To lend credence to the allegations, many Congress leaders were seen distributing money to the people after Rahul Gandhi left the venue.

The CM and the District Minister, who are keen on securing the political ambitions of their sons, are said to have appealed Rahul to issue the party ticket to Dr. Yathindra Siddharamaiah from Varuna Assembly segment and Sunil Bose from T. Narasipur Assembly segment, both of them located in the home district of CM Siddharamaiah.

During the meeting, the CM and the District Minister have assured Rahul Gandhi that it is their personal responsibility that the two young leaders are  elected from their respective Assembly segments.

READ ALSO  Karnataka Housing Board scam back to haunt G.T. Devegowda ahead of Assembly polls

Sait’s Padayatra: During the road show, Minister Tanveer Sait, sporting a saffron turban, walked along the vehicle in which Rahul Gandhi and CM Siddharamaiah were present.

AICC President Rahul Gandhi and other Congress leaders  also participated in a road show taken out at Pandavapura yesterday.

Chief Minister Siddharamaiah introduced Darshan to Rahul Gandhi and said that Darshan too was contesting the  Assembly polls. 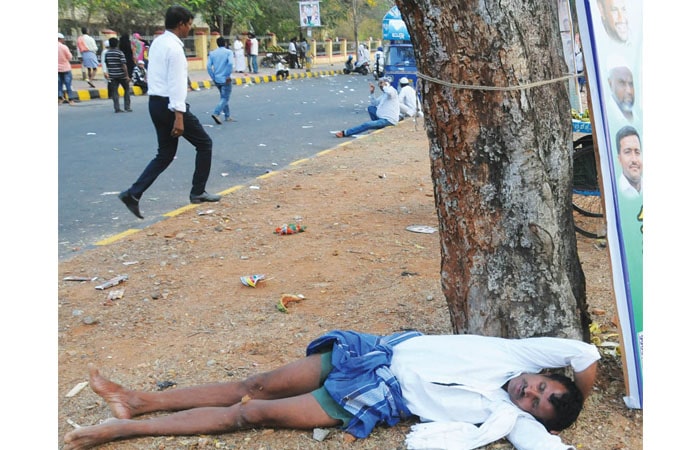 IN HIGH SPIRITS: Minutes ahead of the rally, almost all bars and restaurants in the city were thronged by boozers who had come to attend the rally. Some were seen consuming alcohol on the footpaths and sleeping on the roadside.