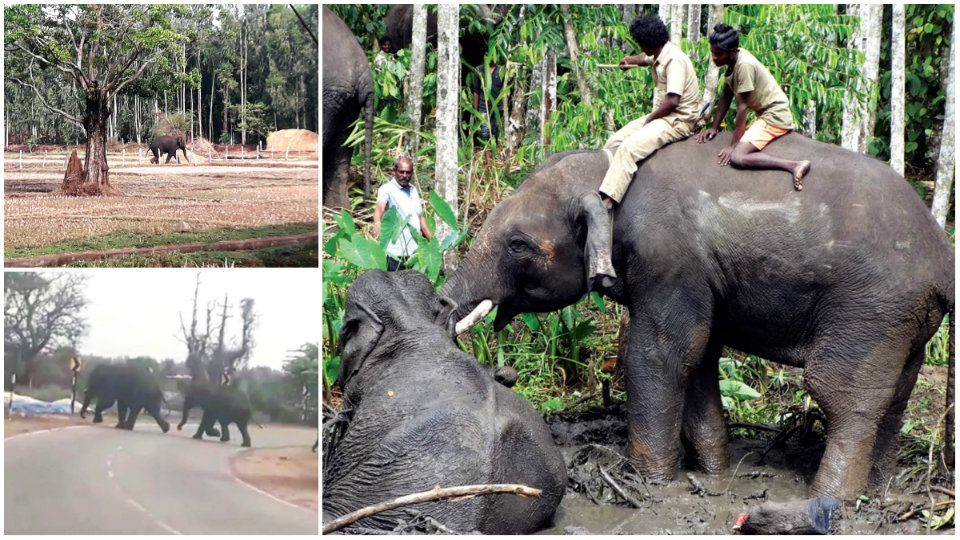 Six wild elephants were electrocuted near Siddapur in Kodagu during June last year in two separate incidents. Many more elephants died in Kodagu in 2017 due to electrocution, gunshot wounds and drowning. Tracing the causes behind these deaths reveal that all the elephants had ventured out of the forests in search of food. Dwindling forest cover and lack of green growth have forced pachyderms to enter the human habitat areas, sending shivers down the spine of farmers and coffee estate owners. This year too, there is no break in man-animal conflict in Kodagu as there is no respite from crop loss due to elephant menace and at the same time, elephants continue to die.

A herd of wild elephants is creating panic in Kanive village near Hebbale in Somwarpet Taluk. Five elephants were spotted by the residents and the herd damaged paddy, chili, banana and other crops, said villagers.

The elephants have come from Chennenahalli forest area and were spotted inside the estate of Bharadwaj K. Anandathirtha at around 6 am yesterday. The elephants were later found on the banks of River Cauvery. Residents said that as the herd was spotted inside the estate they did not send their children to schools. Many office-goers too stayed away from work yesterday.

Villagers later alerted the Forest Department and officials attempted to chase them back into the forests. Seeing the advancing human team, the elephants turned towards Marur and damaged an Anganwadi building. Fortunately, as children did not attend classes, a tragedy was averted. The herd damaged vast acreage of chili crop.

The wild elephants later entered Halekote village and damaged jowar crop. By evening, the marauding elephants entered the forest area. Residents, however, say that the pachyderms would return as paddy, jowar and other crops are fully grown and are easily available for the elephants to feed on.

Forest Department officials were successful in rescuing an elephant that was stuck in slush at Rangasamudra near Kushalnagar in Kodagu district.

A herd of elephants from Meenukolli Reserve Forest had entered the estate of Parlakoti Jayaprakash on Wednesday evening. One of the elephants in the herd, a 35-year-old female, got trapped in the slush. When the estate owner went there, he saw the jumbo struggling to come out and informed the forest officials.

Initially, the Forest officials tried to pull the elephant from the slush with the help of a backhoe (JCB) but were unsuccessful as the panicked elephant fell back into the slush. Also the elephant was exhausted and it refused to move.

Later, a team of tamed elephants was brought from Dubare Elephant Camp and the elephant was pulled out from the slush. The elephant was later treated by a veterinarian. DFO Manjunath, Kushalnagar RFO Arun and mahouts of Dubare were present.

Three elephants, one a calf, were found dead at different places in Kodagu district on Thursday. The deaths took place at Bollera Gate near Choorikad under K. Badaga Gram Panchayat limits in South Kodagu and the pachyderms had strayed outside the woods in search of food. Coffee plants were damaged in many estates as the elephants entered the plantations.

A tusker, aged between 18 and 20, was found dead in a lake inside the coffee estate owned by Mukkatira Gappu Ganapathy at Choorikad village near Nalkeri. According to Forest Department officials, the tusker was part of a herd that had come close to the tank to drink water. “We suspect that the elephant slipped into the water body while playing, or was pushed into it by a stronger elephant. The tusker could not rejoin the herd because of the slippery bank. It drowned as water was found in its lungs and stomach. It had a ruptured heart also,” said Deputy Conservator of Forests (Madikeri) Maria Christu Raja.

A 35-year-old female elephant along with its five-month-old calf died in an estate near Choorikad. Forest officials said that the mother elephant was feeding its calf when she collapsed on the calf. Unable to bear its mother’s weight, the calf was suffocated to death.

The incident occurred near the estate of Machimada Raja Thimmaiah. Forest officials suspect that the mother elephant died of an injury inside the stomach and internal bleeding. “The wound could be from a gunshot. But it was not fresh,  and there was pus formation. Some bullet marks were found on the mother elephant’s body though the post-mortem did not find bullets,” officials said. Hunsur wildlife division veterinarian Majeed Khan conducted the post-mortem. 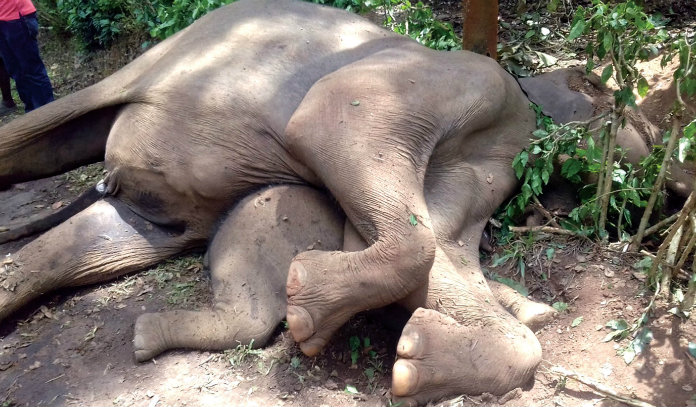 The death could be owing to many factors, including dehydration and its weak condition, since it was lactating. It could have been suffering from dehydration from the summer heat and the continued dry spell in the region, officials added.

Thithimathi ACF Sripathi said that the post-mortem report has been sent to Centre for Cellular and Molecular Biology in Hyderabad for forensic tests that will ascertain the exact cause of death.

Elephant Kodagu Man-Animal Conflict
A DC and a Dog with a Difference!
In appreciation of book on ‘SOM’