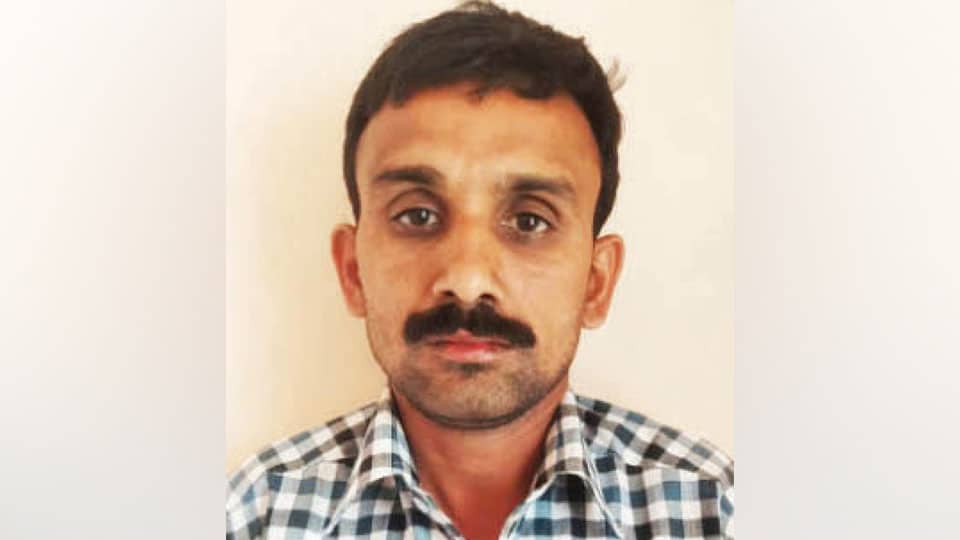 Periyapatna: Even as the incident of a home along woman being murdered and her gold mangalya stolen is still fresh in the minds of the people of the taluk, a man was caught after he made a bid to kill a home alone woman and rob her of her gold chain yesterday. The accused was locked inside the house by the public till the Police arrived and arrested him.

It may be recalled that on Feb. 3, miscreants had barged into the house of a flour mill owner Indresh and had killed his wife before decamping with the gold mangalya chain. Surprisingly, the accused who made a bid to kill a woman yesterday is also a flour mill owner and has been identified as Mallikarjuna.

Details: Yesterday, the woman, identified as 50-year-old Asha alias Lalitha, wife of truck driver Dhananjaya was alone at her house in Parisaranagar, when Mallikarjuna, who runs a flour mill and a grocery store at Shivappa Layout, came to her house asking for water. After Asha gave him water, Mallikarjuna then asked her for some salt and when she was went to get the salt, Mallikarjuna reportedly threw chilly powder into her eyes and snatched her gold mangalya chain.

Soon, Sub-Inspector Ganesh, who arrived at the spot, went inside the house and brought the accused outside and it was only then the public, who had assembled in large numbers, came to know who the accused was.

Circle Inspector Pradeep, speaking to SOM, said that the injured Asha has been admitted to a private hospital in Mysuru and added that preliminary investigations have revealed that the accused had entered the house to loot valuables and as he was known to the woman, he tried to kill her fearing arrest.

SP C.B. Ryshyanth also visited the spot. Periyapatna Police, who have registered a case, are investigating whether the accused Mallikarjun was also involved in the murder on Feb. 3.