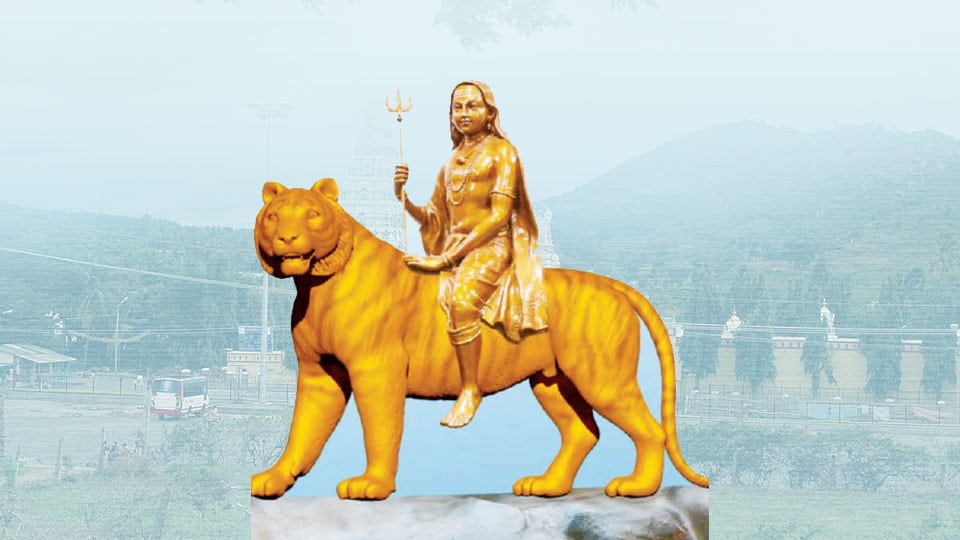 Hanur: Decks are clear to build a 100-ft statue of Male Mahadeshwara Swamy on a 43-acre plot atop Male Mahadeshwara Hills (M.M. Hills), about 110 km from Mysuru. The land hurdle for the project has been cleared and the construction will begin soon.

Sri Male Mahadeshwara Swamy Development Authority (MMDA) had planned to install the statue as a tourist attraction at the hilltop. A decision in this regard was taken in 2016 and the plot for installing the concrete statue had been identified at Deepadagiri Oddu, about 500 metres from the Temple complex.

The project cost had been estimated at Rs. 20 crore and contributions would be raised from devotees.

Apart from the already earmarked 19 acres, there was a requirement of one acre that was owned by a private person, who had refused to part with his land. This had proved a hurdle for the construction of the giant statue and the MMDA, along with Chamarajanagar District Administration, had been in talks with the landlord. After hectic parleys, the landlord has now agreed to part with the land and the MMDA has managed to obtain the landlord’s signature on the sale deed.

As of now, the statue will stand in a complex of 19 acres and an additional 24 acres of land will be required that will be procured in stages for all the elements required for the statue project. A blueprint of the statue has already been prepared and it will be designed as ‘Mahadeshwara Swamy sitting on a tiger, holding his Trishula.’ The pedestal itself will be 40 X 18 metres wide and 6 metres high.

The base of the statue will host a museum that will depict the historical place and its presiding deity Male Mahadeshwara. The works will be executed by the firm that executed the project of Lord Shiva statue at Murdeshwara and Basavanna statue at Basavakalyan. The statue will be made using concrete and iron.

Construction of a spacious and verdant garden, fountain and an open air theatre are also being planned near the statue. Basic facilities  will be developed at Nagamale and steps will be taken to recruit staff to improve the facilities on the Hill.

An action plan has been prepared to develop the Hill in phases besides building toilets, providing drinking water and parking facilities to devotees. CCTV cameras with a range of one km will be installed in the complex.