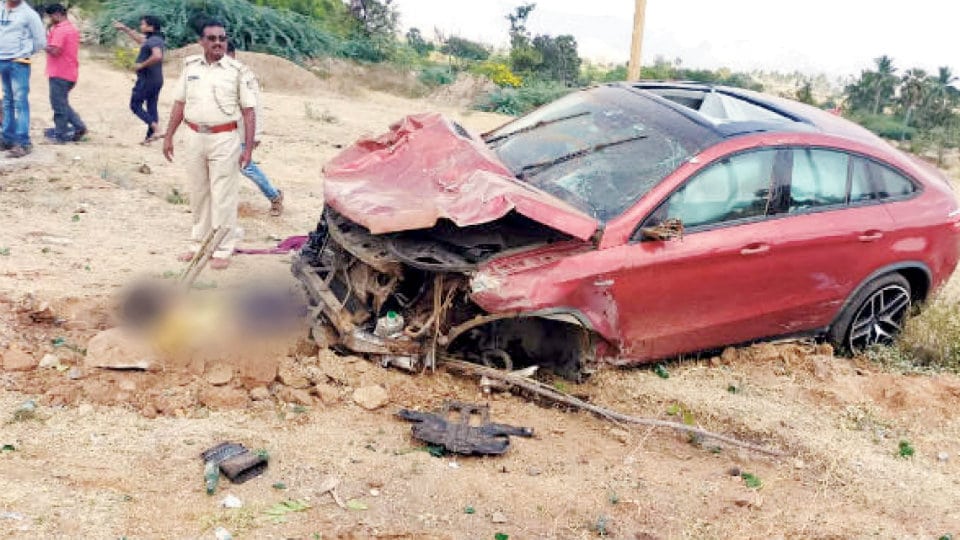 Was Minister Ashoka’s son at the wheels?

Bengaluru: After Mohammad Nalapad, son of Shantinagar Congress MLA N.A. Haris, was in the news for an accident in a high-end car in Bengaluru two days back, now Karnataka Revenue Minister R. Ashoka’s son is allegedly involved in a car accident that killed two people at Hospet in Ballari district.

The car crash took place on Monday (Feb.10) near Durga Petrol Bunk in Mariyammanahalli village. At around 3 pm, the speeding red Mercedes Benz car (KA-05-MW-357) rammed into a tea stall by the road and the car hit a pedestrian, 18-year-old Ravi Naika, and dragged him for about 100 meters. He died on the spot. Apart from Ravi, a passenger in the car, Sachin, also lost his life in the crash. The impact of the accident was such that it dragged the pedestrian for over 100 metres.

Speaking to reporters in Bengaluru, Minister Ashoka denied that the car belonged to him. “I have no connection with the car or the owner,” he said. He, however, was silent when asked if his son Sharath was behind the wheels. “Law will take its own course and nobody is above it,” he said and left the place.

According to the Police, the car was going from Hampi towards Bengaluru. The car had five occupants. The FIR names one Rahul as the driver of the car and Rakesh, Shivakumar and Varun as the other passengers. The car has been registered in the name of an international school in Kengeri.

Eyewitnesses, however, claimed the Revenue Minister’s son was in the car. “Revenue Minister R. Ashok’s son, Sharath, was driving the car during the accident that killed two people. When the incident was known, he was sent away in another car immediately,” they said.

Circle inspector Shankarappa told reporters, “What we know is that there were five people in the car and all of them were from Bengaluru. But we don’t know whether Ashok’s son was driving the car. Investigation is on. Whoever is guilty, action will be taken against them.”