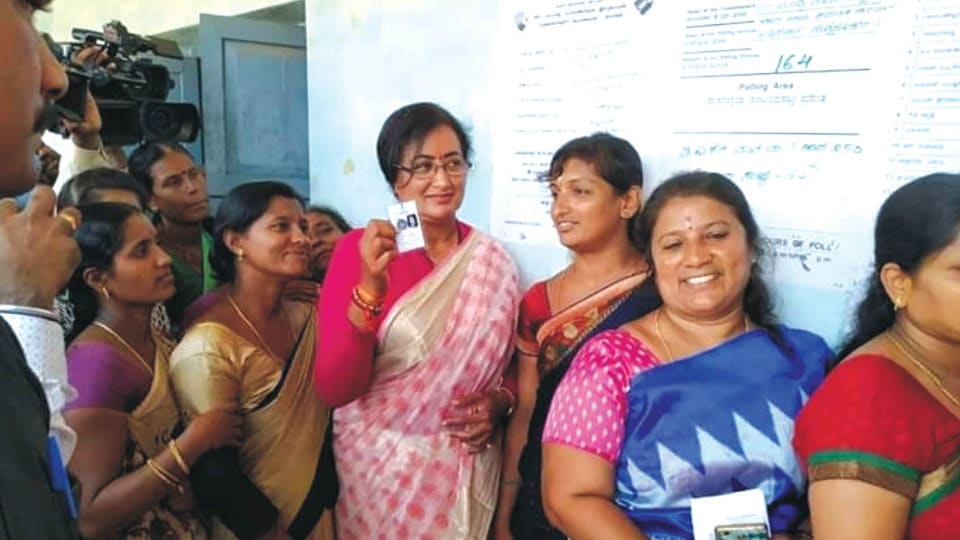 Mandya: Barring minor incidents of poll clash in few pockets, brisk and peaceful polling was reported in all the 2,046 polling booths in the high-voltage Mandya constituency due to the contest of high-profile candidates, from this morning.

Prominent among those who exercised their rights include Independent candidate Sumalatha Ambarish who cast her vote along with her son Abhishek Gowda at Doddarasinakere in Maddur taluk, the native place of Ambarish, after offering puja to Goddess Chamundeshwari atop Chamundi Hill in Mysuru. Coalition candidate Nikhil Kumaraswamy cast his vote at Kethoganahalli in Ramanagaram taluk.

Voters were seen exercising their franchise enthusiastically in many polling booths standing in long queues in this sugar bowl since morning 7.

Interestingly, over 50 Sabarimala Maladharis also exercised their rights at Chikkamulagudu village Government School polling booth in Malavalli taluk before leaving for the pilgrimage.

State Minor Irrigation and District Minister C.S. Puttaraju cast his vote along with his wife Nagamma at a polling booth at his native place Chinakurali village in Pandavapura taluk. Speaking to reporters on the occasion, the Minister exuded confidence about the victory of JD(S) candidate Nikhil Kumaraswamy. He said that he had received complaints of EVM glitches delayed voting in many parts of the district. However, he said that he had given instructions to rectify the errors in EVMs to ease the voting process.

He alleged that he has also received complaints against some officials who were said to be arrogant and action will be initiated against them. Mandya MLA M. Srinivas exercised his rights at Hanakere village in Mandya taluk. Centenarian Chikkamayamma cast her vote at Doddarasinakere village in Maddur taluk. Raitha Sangha leader Sunitha Puttannaiah, who supported Sumalatha Ambarish in this election, too exercised her rights at Kyathanahalli village in Pandavapura taluk.

Voting process was delayed in many booths across the constituency due to technical snags in EVMs. Voting was delayed for more than one hour at polling booth number 177 in Gandhinagar of Mandya. Officials continued the process after replacing the EVM.

Voting process was also delayed due to EVM failure at Rudrakshipura in Maddur taluk and also at Mallenahalli in K.R. Pet taluk. Tahsildar M. Shivamurthy Gowda visited the spot and voting resumed after the replacement of EVM. Voting also delayed for 45 minutes at Hirahalli in the same taluk.

K.M. Sinchana, one of the first time voters and a resident of Kallahalli in Mandya taluk, said that she was very happy for voting first time.

Wordy duel ensued between the election agents of Independent candidate Sumalatha Ambarish and coalition candidate Nikhil Kumaraswamy over the issue of not keeping EVM properly at Pannedoddi in Maddur taluk.

On receiving information, MLA and Transport Minister D.C. Thammanna visited the spot along with the officials. Some youths raised slogans against them. Voting was delayed for more than two hours from 8 am to 10.30 am over this issue in the village.

Supporters of Independent candidate Sumalatha Ambarish and coalition candidate Nikhil Kumaraswamy clashed with each other over the issue of holding road show at Doddarasinakere in Maddur taluk.

A wordy duel ensued between supporters of both the candidates and officials for not allowing Sumalatha to hold road show while allowing Nikhil to carry out the road show. Police intervened and dispersed the mob by resorting to a mild lathicharge and brought the situation under control.

Based on the complaint filed by poll duty officials, Nagamangala Police registered a case against Ramesh, a resident of ward number 19 of Nagamangala town, for violating the secrecy of voting by uploading the photo of him pressing the button of EVM on social networking sites this morning.