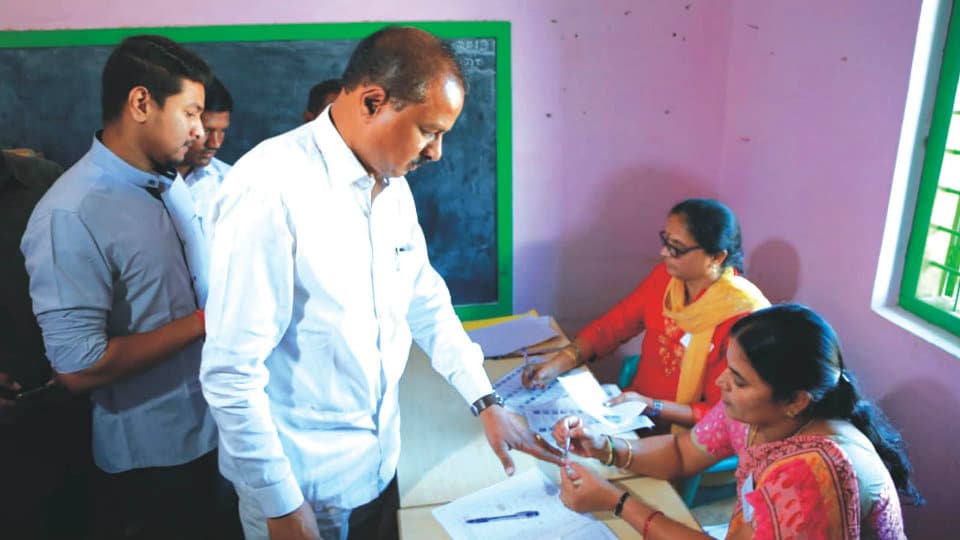 Chamarajanagar: Voting began on a moderate to brisk note this morning in all the 2,005 polling booths across Chamarajanagar Lok Sabha constituency.

Polling was by large peaceful at all the eight Assembly segments of the constituency — Chamarajanagar, Hanur, Kollegal and Gundlupet of Chamarajanagar district and Varuna, Nanjangud,  H.D. Kote and T. Narasipur of Mysuru district.

In the initial three hours, voting percentage hovered around 17     in the constituency.

The electorate, including first time voters, exercised their franchise in almost all the polling booths.

Prominent among those who cast their votes are sitting MP and Congress-JD(S) coalition candidate from Chamarajanagar LS seat R. Dhruvanarayan, who exercised his rights along with his son Darshan at his native place Heggavadi village in Chamarajanagar taluk.

While BJP candidate V. Sreenivasa Prasad exercised his right at a polling booth in Mysuru, BSP candidate Dr. Shivakumar cast his vote at his native place in Malavalli of Mandya district.

Incidents of villagers boycotting polls and demanding the District Administration to fulfil their demands were also reported in the constituency.

Villagers of Alur in Chamarajanagar taluk boycotted the polls and staged a protest at their village, urging the Government to release water to canals so that they can take up minor irrigation and agriculture activities.

Upon receiving the information, officials concerned rushed to the spot in the afternoon and pacified the villagers to exercise their rights after promising them to look into their demands                             after the polls.

Residents of Doddane hamlet atop Male Mahadeshwara Hills also boycotted the polls accusing the Government of not providing them with basic facilities.

Backward Classes Welfare and Chamarajanagar District in-Charge Minister C.S. Puttarangashetty was forced to wait for about two hours to exercise his voting rights at his native place Uppinamole in Yalandur of Chamarajanagar due to  technical glitches in Electronic Voting Machine (EVM) this morning. The EVM developed technical problems as soon as the District Minister pressed the button of the machine.

As indelible ink was already applied to his finger, the District Minister was made to wait for two hours.

On receipt of information, officials immediately visited the spot, replaced the EVM and allowed the Minister and others to cast their votes.