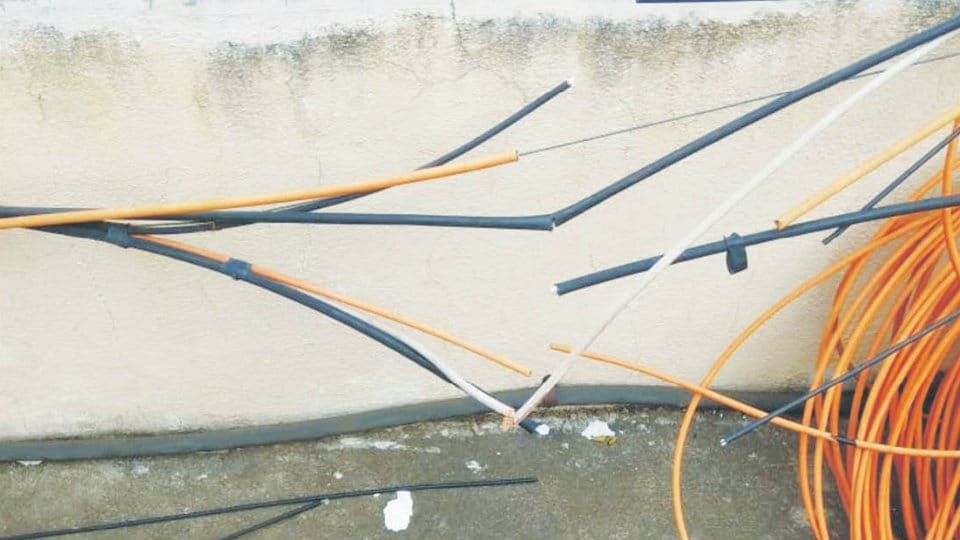 Mandya:  Cable TV viewers in Mandya and surrounding places were denied of watching the counting progress as miscreants had cut the cables belonging to Den Cable Network this morning.

It may be recalled that high voltage Mandya Constituency witnessed a tough contest following the contest of actress Sumalatha, wife of late actor-turned- politician M.H. Ambarish against Congress-JD(S) Coalition Candidate Nikhil Kumaraswamy, son of Chief Minister H.D. Kumaraswamy. This sugar belt grabbed the attention of the media and the country right from the day of filing nomination and till the campaigning ended.

The power cuts and cable TV disruptions were the major issues on the day of filing nominations. Independent candidate Sumalatha Ambarish had levelled strong allegations that the Superintendent of Police of Mandya had been asked to not allow any power cuts or disruption of cable TV when Nikhil Kumaraswamy filed his nomination papers.

She had also alleged that Mandya District Administration had adopted double standards which was unconstitutional and against the democratic principles.

The highest voter turnout of 80.24 per cent in this segment has set off speculation on what the final result it could point to, with both the rival camps reading it in their favour.

The polling in the Constituency was 10.01% higher than that in the 2014 general elections (70.23%) and 26.31% higher than that in the 2018 by-election 53.93%. While Sumalatha’s supporters claimed that the voter turnout was high as the people wanted a change, which was backed with intense and emotional campaign by the candidate, the JD(S) leaders claimed that the record turnout was due to consolidation of Congress and JD(S) votes. There was also a lot of betting among the supporters of rival camps over the victory of their candidates.

Meanwhile, on learning about the cables being cut, the technicians of Den Cable Network repaired the cables and set right the problem, it is learnt.