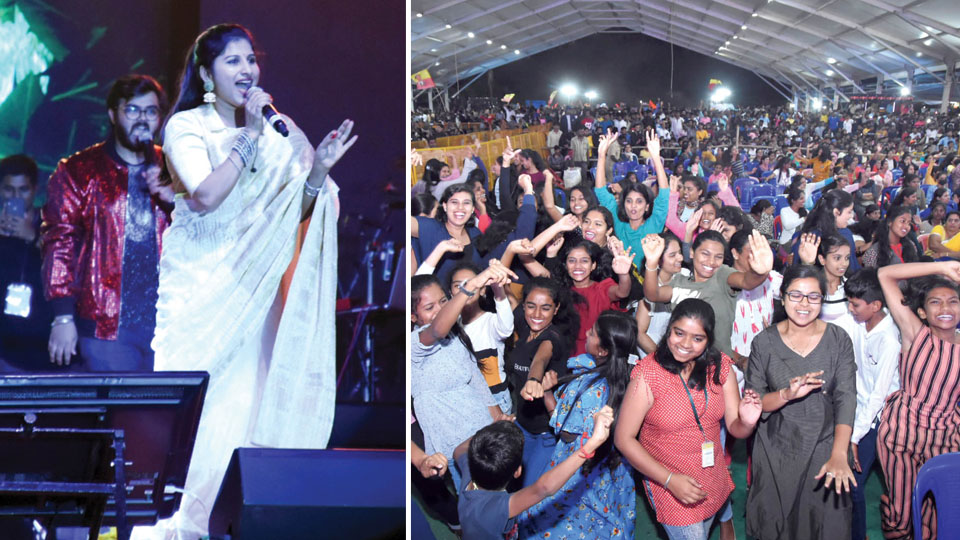 Last evening’s concert by playback singer Satyavathi Rathod, colloquially and popularly known as Mangli, at the Yuva Dasara was the perfect example of how Indian music is attracting listeners as well as singers by breaking the language barriers. Belting out many Kannada numbers, Mangli proved a thorough entertainer. Dressed in traditional white with matching ear-rings for the occasion, Mangli sang Kannada, Hindi and Telugu songs and the response from the audience rose to a crescendo.

Mangli was accompanied by singer Anirudh. Both danced on the stage with their renditions and the crowd too joined the ensemble. After Mangli’s performance, playback singer Amit Trivedi sang Hindi numbers and received a rapturous applause from the crowd. This performance was followed by ‘Star Night’ that was marked by the performance of actor Harshika Poonacha, comedians Tabla Nani and Mithra, actors Radhika Narayan, Payal, Pruthvi Amber and Pratham. The songs were rendered by Inchara and Shashank. Models from Heartbeats Dance Academy presented catwalks and a fashion show where elegant saree-draped women stole the show.