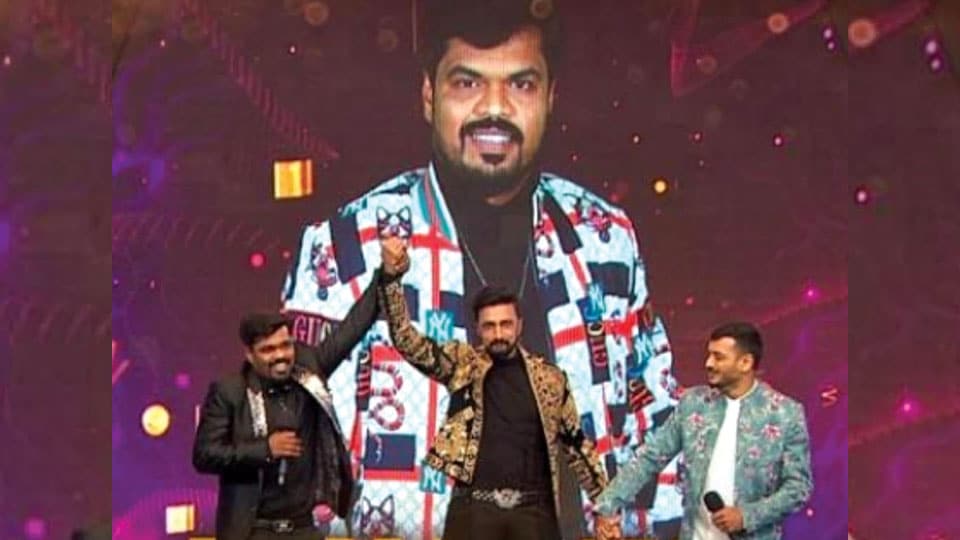 Bengaluru: Curtains came down on Bigg Boss Kannada Season-8 with the grand finale yesterday with host Sudeep declaring Manju Pavagada as the winner and K.P. Aravind as the runner-up.

In the eighth season, all top 5 contestants have walked away with a cash prize which was not the case in earlier seasons where only the winner got the cash prize.  The show, for the first time in the history, was restarted after getting suspended on May 8 after the Karnataka Govt. imposed a lockdown to prevent the spread of the second wave of the pandemic. On June 23, Colors Kannada kicked off the second innings.

Manju started his TV career in the year 2018 with the comedy show ‘Majaa Bharatha’ telecasted on Colors Kannada TV. His career gained a new identity from this TV show and he also gained a lot of popularity. He began his acting career in Kannada films with ‘Love You 2’ released in the year 2018 and also played a supporting role in films ‘Ramarjuna’ and ‘Bajrangi 2’, released in 2021.

Born on Dec. 8, 1985, K.P. Aravind is an Indian bike racer who has won 17 Nationals and an International Trophy. Apart from this, he is also an actor in the Kannada film industry, who played the lead role in the film ‘Bengaluru Days.’

In 2011, he participated in the Motorcraft Championship organised by Sri Lanka Motor Race Drivers Association and by winning this Championship, he became the first Indian to win the Overseas Motorcross Championship. He also suffered a number of injuries during the racing in Sri Lanka, which took him months and years to recover. In 2016, Aravind became the second Indian to complete the Dakar Rally held in Peru where he finished in 39th place.

Divya Uruduga was born in Uruduga village in Thirthahalli, Shivamogga. She started her acting career with Kannada TV show Chitte Hejje. Later, she went on to appear in Kannada TV shows Ambaari, Khushi and Om Shakti Om Shanti. In 2019, she played the lead role of Sneha in Kannada film ‘Face 2 Face’ produced by B.K. Sumithra and in 2020, she played lead role of Jhanvi in movie Ranchi.