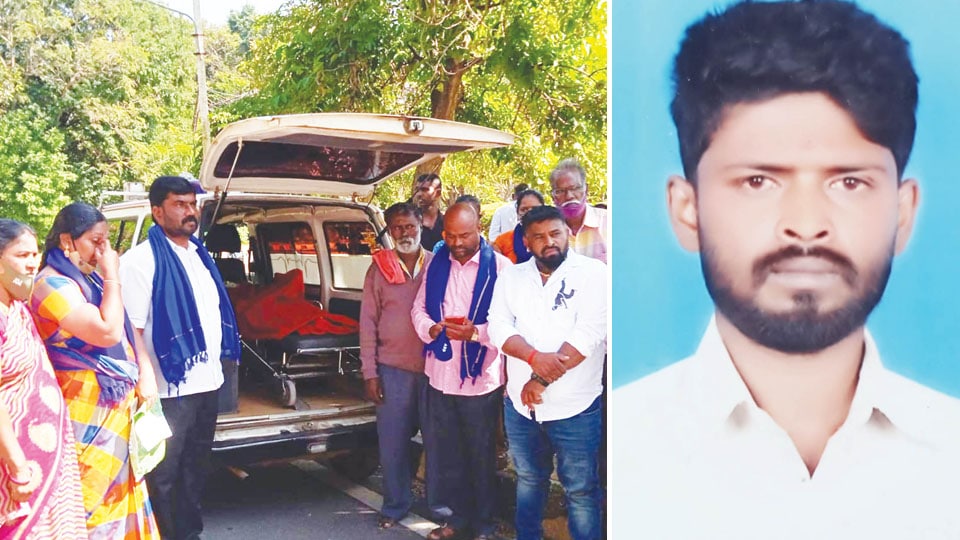 Mysore/Mysuru: Accusing that a private Pourakarmika was forcibly made to get into a sewage soak pit to clean it, who took ill and later breathed his last at a hospital, the family members of the deceased Pourakarmika, led by former Mayor Narayan, staged a protest by keeping the body of the Pourakarmika in front of the Deputy Commissioner’s (DC) Office here yesterday demanding Rs. 25 lakh compensation to the deceased family members.

The deceased Pourakarmika is A. Madhu (27), a resident of Pourakarmika Colony in Periyapatna. On Dec. 17 evening, an Anganwadi teacher, residing on Krishnapura Road in the town, was getting the sewage soak pit of the house cleaned manually and Health Inspector Pradeep and staff, along with Safai Karmachari Jagruti Samithi Member H.K. Mahesh, who received information about it, rushed to the spot and advised Pourakarmikas Madhu, Vishwa and Rajesh not to indulge in manual scavenging.

Health Inspector Pradeep had lodged a complaint against the Anganwadi teacher at Periyapatna Police Station.

But the next day, Madhu is said to have taken ill and was rushed to Periyapatna Government Hospital, from where he was taken to a hospital in Mysuru and was admitted there. Madhu later breathed his last at the hospital.

The protesters, who brought the body of Madhu in an ambulance, stationed the vehicle near the DC’s Office and staged the protest.

Accusing that three Pourakarmikas were forcibly made to get into the sewage soak pit to clean it, out of whom Madhu took ill and died at a hospital, the protesters demanded stringent action against those who had made the Pourakarmikas do manual scavenging works despite being banned and register a case against them.

Former Mayor Narayan said that though manual scavenging has been banned, it is still thriving in the State and alleged that the Police were not booking cases under MS Act in such incidents.

Pointing out that 89 Pourakarmikas had died in the last 10 years after indulging in manual scavenging, Narayan said that no action has been taken even on a single offender.

DC Dr. Bagadi Gautham, who arrived at the protest spot, gave a patient hearing to the grievances of the Pourakarmikas, told the protesters that adequate compensation would be provided to the deceased family members by the Government and added that he has held discussions with the officials of the Social Welfare Dept. in this regard besides stating that he has directed the Police officials to complete all legal procedures soon.

The DC also said that he would direct the officials concerned to conduct investigation and take legal action against those who had made the Pourakarmikas indulge in manual scavenging.

Meanwhile, officials from the Periyapatna Town Municipal Council handed over a compensation cheque of Rs. 10 lakh in the name of deceased Madhu’s wife Abhirami, which was received by Madhu’s father and sister, following which the protest was withdrawn.