Home » Feature Articles » So many mothers, and tongues 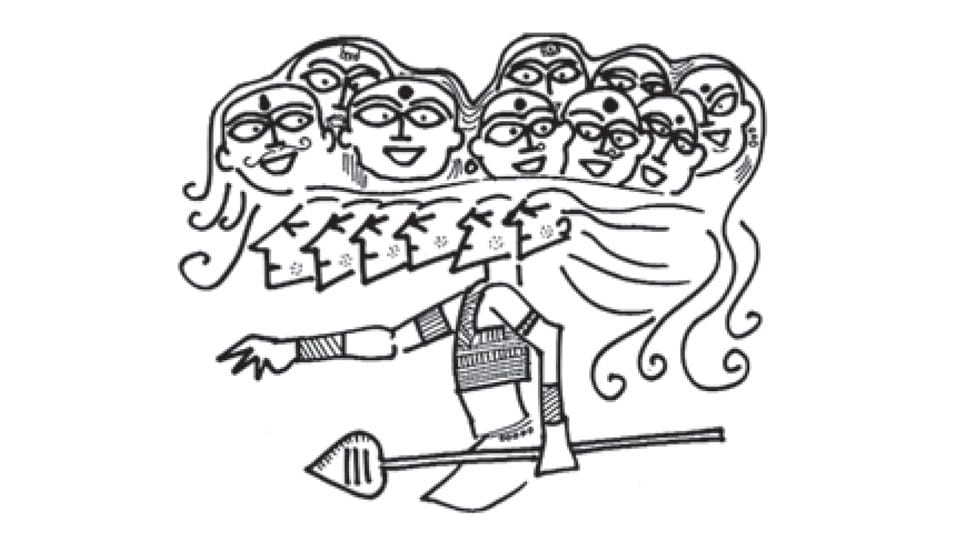 So many mothers, and tongues

The devas were threatened, as usual, by the rise of yet another asura. This time it was Taraka, and he was exceptionally powerful. He had declared that only a six-day-old child could kill him. The devas wondered who could father such a powerful child and they concluded it could only be Shiva, the great ascetic, the one who had withdrawn all his senses, and was completely withdrawn from worldly life.

Since Shiva did not engage with anything in this world, of all his energy was contained within his body. In Tantrik versions, which are not very coy, specific reference is made to his semen. Never been spilt, empowered by eons of meditations and contemplation, it was full of potent occult energy. A child born of such energy would surely be a superman: he would be fully developed at the time of birth, fully capable of going to battle shortly thereafter.

In edited versions, Shiva gives his seed to the devas. But in unedited versions, the devas sent Kama, the god of desire, to arouse Shiva into spilling his semen. Shiva is not amused and so burns Kama to death with a glance by opening his fiery third eye. The gods then beg the Goddess to help them and she takes the form of Parvati, daughter of the mountains, and she impresses Shiva by her own ascetic practices and secures a boon from him to marry her. But though he makes love to her, he does not spill semen. Frustrated, the gods finally beg Shiva to help them out. And Shiva, momentarily distracted, lets a drop of his bodily fluid fall into fire.

But that drop is so fiery that Agni, the fire-god, gets burned and begs Vayu, the wind-god, to take hold of it. Even Wind cannot calm it down. So Vayu drops it in Ganga, the river. The river boils and the reeds on the riverbank catch fire. When the fire subsides, from the ashes emerge six children who are nursed by the Krittikas, the six stars of the Pleiades constellation.

Finally, Parvati arrives to claim Shiva’s child. She hugs the six children and they become one. This child, of multiple mothers, leads the deva army against Taraka and kills him, earning the adoration of the devas who declare him celestial commander and warlord.

He is called Kartikeya, the child nursed by the Krittikas. He has other names such as Skanda, Guha, Shanmukha, Murugan, Kumara, Saravarna, Gangeya, reminding all of his many mothers: two devas (male gods incidentally), a river-goddess, a goddess of the reed (Sara), forest (vana), six stars, and a mountain princess.

Whenever people ask me what my mother tongue is, I always tell them the story of Kartikeya’s many mothers. In India, we have many mother tongues: one from our mother, several from the mother land: some connect us with our roots, some help build relations with neighbours, some get us good international jobs. All mothers are good and wonderful and delightful. The petty create a hierarchy between them.

This multiple mother tongue approach is what a diverse country like India needs. It celebrates our plurality. Ob­session with one language, be it Hindi or Sanskrit or a State language or English, reveals a lack of imagination and a contracted crumpled lazy mind that is not large enough to in­clude and enjoy many.