Home » News » Mayor disappointed over Rajyotsava being limited to publicity 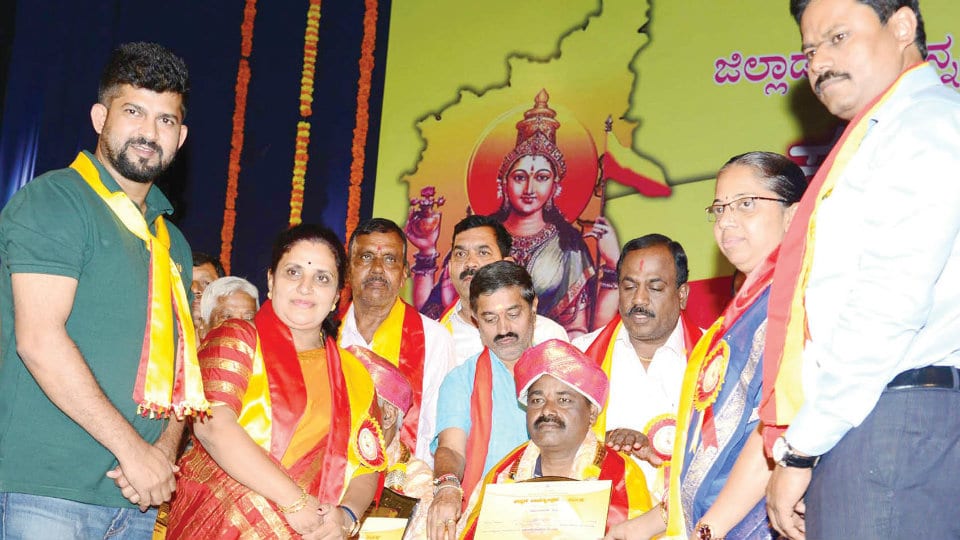 Mayor disappointed over Rajyotsava being limited to publicity

Mysuru: Expressing disappointment that Kannada Rajyotsava celebration is limited to publicity, Mayor Pushpalatha Jagannath batted for a more purposeful and sustained celebrations for the cause of Kannada land and language.

She was speaking after presenting District Kannada Rajyotsava Awards to achievers from various fields at a ceremony jointly organised by the District Administration and Kannada and Culture Department at Kalamandira here yesterday.

Observing that Kannada Rajyotsava celebrations is merely restricted to the month of November, Pushpalatha called for long-lasting celebrations that remains etched in the minds of the people.

The Mysuru City Corporation (MCC) has decided not to renew the licences of such establishments which do not follow this rule, she pointed out.

Maintaining that Kannadigas were very much broad-hearted, the Mayor opined that Kannadigas have the inherent instinct to accept others and this has resulted in Bengaluru becoming  a home to people from other States, thus becoming a sort of mini-India.

Stressing on the need for maximum use of Kannada in administration, she said that it is unfortunate that the influence of English has forced Kannada to struggle for survival in it’s own land of Karnataka.

Confusion at the programme

With numerous Kannada activists thronging the stage, confusion prevailed  for some time as the activists vied with each other in taking selfies with the awardees. This attitude of the activists  proved a hurdle to the officials and people representatives to honour the awardees.

As the activists indulged in taking selfies, coupled with video-recording, the gathering was seen cursing them. Also as the cultural programmes commenced late, the teachers who had brought students from their schools had a hard time.

MP Pratap Simha too presented the award along with the Mayor. ZP CEO K. Jyothi, Assistant Commissioner Venkataraju, Kannada and Culture Assistant Director H. Chennappa and others were present.

17. Krishna Thippur (a native of Thippur in K.R. Nagar and resident of Kuvempunagar, Mysuru) – Literature

Apart from the above awardees, the other three achievers who were included to the list at the last moment are as follows: