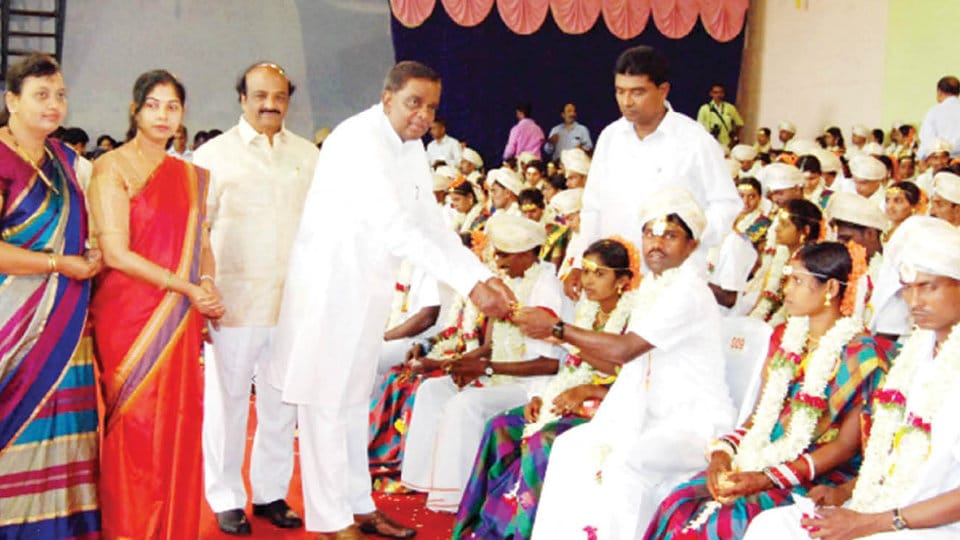 Bengaluru: To help poor Hindu families who cannot afford the increasing cost of wedding expenses, the State Cabinet has launched ‘Taali Bhagya’. It is a sequel to former Chief Minister Siddharamaiah’s ‘Shaadi Bhagya’, a flagship scheme for minorities.

Muzrai Minister Kota Srinivas Poojari said mass marriages will be held on auspicious days of April 26 and May 24 next year (2020) at select temples that fall under the Muzrai Department. Temples would spend Rs. 55,000 per couple, which includes an eight gram gold taali (mangalsutra) worth Rs 40,000.

He said Rs. 5,000 would be given to the groom and Rs. 10,000 for bride for clothing and other wedding expenditure. The cash would be deposited in their bank accounts soon after the wedding. “The money is for traditional wedding attire,” Poojari said.

Unlike ‘Shaadi Bhagya’ that was limited to BPL families, ‘Taali Bhagya’ has no income limit. Mass marriages will be held at 90 to 100 select ‘A’ category temples that get a high income and have good resources. This includes Kukke Subramanya in Dakshina Kannada and Chamundeshwari Temple in Mysuru.

“A month prior to the wedding date, couples who want to get married under the Hindu Marriage Act can register their names with the Department. A list of those getting married will be announced,” he said and added that objections will then be invited to ensure the scheme is not misused. ‘Taalis’ will be procured in a transparent manner and Deputy Commissioners will be responsible for this, he said. Poojari said it is mandatory for parents of the bride and groom to be present at the wedding to ensure there are no “runaway” couples.

It may be recalled here that in 2015, the then Mysuru Deputy Commissioner C. Shikha had launched ‘Shubharambha,’ a mass marriage programme planned by the District Administration at Srikanteshwara Swamy Temple premises in Nanjangud.

The programme, planned to promote simple marriage concept and bring reforms in the society, assumed significance in the wake of marriage turning a burden for many. The response to the scheme was good with over 116 couples tying the knot on the first year of its launch.

The scheme was later continued by D. Randeep who took over as the Mysuru DC. It was, however, discontinued.

To understand the reasons behind the increasing number of farmers’ suicides, the District Administration held interactions with families of deceased farmers at the Hobli level. Many of them said they had to borrow money to organise weddings of their children and were unable to repay it due to crop loss.

To stop farmers from further falling into debt traps, the then Deputy Commissioner Shikha decided to launch a free mass marriage programme.