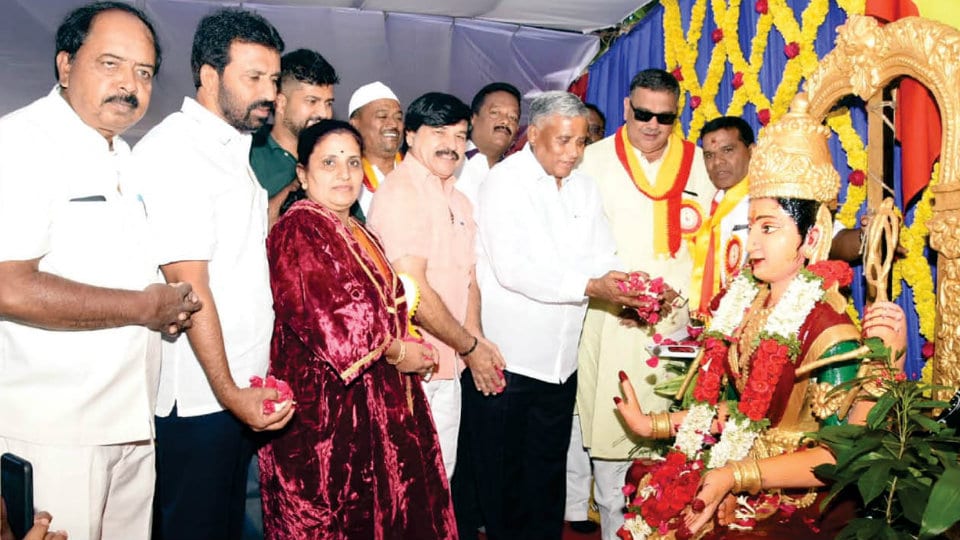 Mysuru: District Minister V. Somanna has called for the co-operation of everyone to make Kannada a part of our daily life and to ensure all-round development of the State.

He was speaking after inaugurating Kannada Rajyotsava celebrations organised by the District Administration, by offering floral tributes to the idol of Goddess Bhuvaneshwari in front of Kote Anjaneyaswamy Temple at the Palace North Gate in city yesterday.

The Minister also hoisted the Kannada flag and received the guard of honour from the Police.

Noting that the State was once known as the Princely State of Mysore, Somanna recalled the contributions made by great stalwarts in the unification of Mysore State post-independence, which is now called as Karnataka State.

Regretting that Kannada is gradually losing it’s influence in the State because of the growing love for English, he stressed on the need for sensitising our youth on the richness of our land, language, heritage and culture.

Recounting the struggle of great personalities like Alur Venkata Rao, Kengal Hanumanthaiah, S. Nijalingappa and many others, Somanna underlined the importance of passing on the rich heritage and history of the State to the coming generation. The younger generation must develop a passion for Kannada literature, culture and art, he added.

Referring to the developmental works in Mysuru, Somanna said that the State Government will provide additional funds for Mysuru under Mahatma Gandhi Nagar Vikas Yojana.

Expressing confidence that the additional amount would help in the improvement of infrastructure and ensuring cleanliness in Mysuru, helping it climb up the Swachh Bharat rankings, Somanna said, a sum of Rs.150 crore has been earmarked  for the purpose.

Speaking about the measures taken by the State Government to reach out to those affected by the massive floods that hit large parts of the State, he said that 4,977 houses were damaged  by floods in the district and the Government has decided to release Rs.5 lakh for cases wherein the damage was total.

In all, Rs.14.05 crore has been released towards the rehabilitation of those whose houses were damaged and additional funds will be released in due course, he claimed and added that the district as  a whole, has received Rs.30 crore for taking up flood relief and rehabilitation works.

Recollecting  the success of Dasara, Somanna said that the Dasara accounts will be released soon. Claiming that he  is a open book and there was nothing to hide for him, he said that there is a delay in the computing of expenditures as the Deputy Commissioner, who was also the Dasara Special Officer, had    gone on leave.

Referring to potholed roads, the Minister said that rains has caused the delay and filling up of potholes and other road repairs will be taken up soon.

The procession was accompanied by a host of folk and cultural troupes, with a few artistes dressed as mythological and historical characters.

An  artiste named Ramesh Shetty, dressed up in Kannada Flag colour and accompanied by his colourfully-decorated bi-cycle, marched  in the procession, along with student B. Bhuvanth, who also decorated his bi-cycle with Kannada Flags, thus earning special attraction.