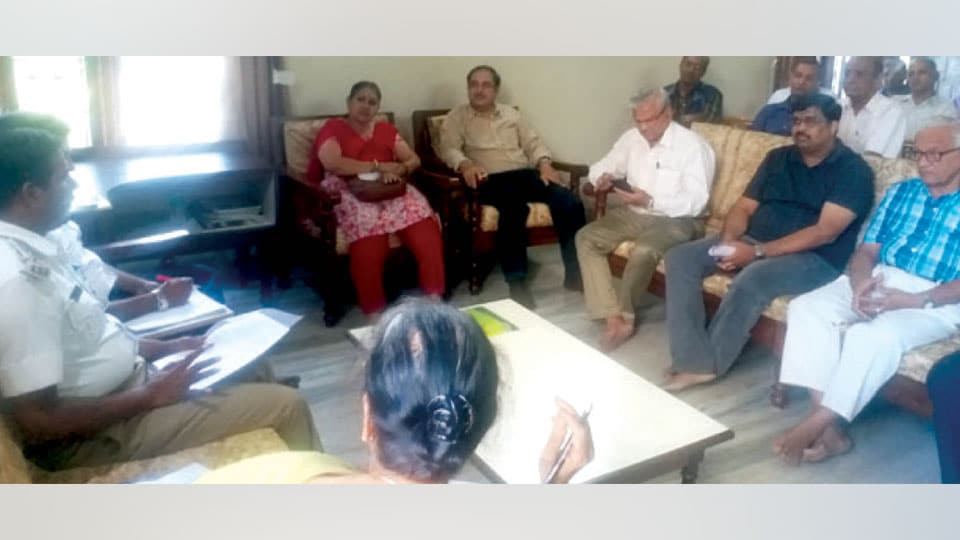 He was replying to a question from one of the Members of the Mysuru Grahakara Parishat (MGP) at the monthly interaction meeting with the Traffic Police, held at its office in Yadavagiri, here yesterday and said that in Mysuru 50 traffic signal lights have been installed in various places with CCTV cameras out of which two cameras are not working and will be repaired at the earliest.

The traffic control in the city is not up to the mark. The footpaths in the heart of the city like Sayyaji Rao Road, Ashoka Road, Chamaraja Double Road, RTO Circle, Gandhi Square, Dhanvantri Road, Devaraj Urs Road, Narayana Shastri Road, Agrahara Circle have all been occupied by footpath vendors and the vehicles are parked in a haphazard manner. Another major violation is signal jumping; besides a few other questions on traffic were discussed at the meeting.

Due to unscientific road humps,  the number of accidents is going up. The Traffic Police are not manning some of the sensitive traffic spots, were the allegations of the public that the members brought to the notice of the Traffic Police for which Ravi replied that his department was making all efforts to solve the problems the public face every day.

However, he pointed out that if the traffic flow has to be smooth even the public should cooperate. Including those riding without helmets, the traffic violations on a daily basis crosses more than a thousand, he said.

Besides there are lakhs of people who manage to escape the eye of the Police by not paying fines, despite committing various traffic offences, he said bringing this issue to the notice of the members.

A MGP member reminded about how the public money is being spent  unnecessarily on a circle that is coming up near Bake Point on Vishwamanava Double Road in the name of development. He also said how very unscientific it was, as it could cause problems for motorists to take a turn, Ravi openly said that the letters written from his department to the MCC is completely ignored.

Another member raised a question, whether the number of roadside eateries is going up in areas where there is large concentration of people or if the Police are allowing such eateries to flourish as there are charges that there is a nexus between them and the roadside vendors were true and they (Police) were collecting mamuls. He also said, because of the footpaths being encroached it was difficult for the senior citizens, women and children to walk on them, he said expressing his anguish.

Ravi replying to this question, outright rejected the charge that the Police were involved in collecting any mamuls. If still people had any doubts they could approach the department along with documentary evidence and file a complaint. He also said that it was not right to hurl unnecessary allegations and dismissed all such charges against the Police Department.