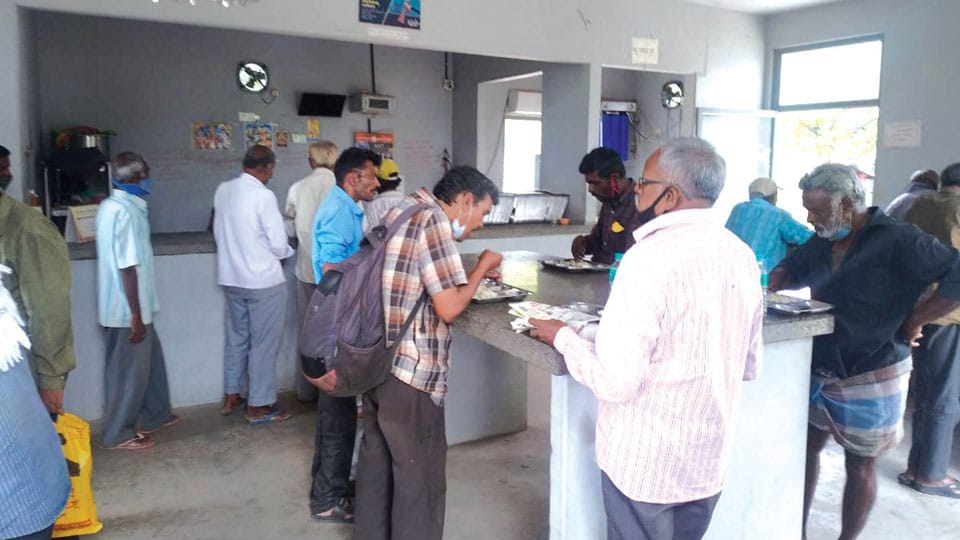 Mysore/Mysuru: The functioning of Indira Canteens in city has come under threat as they are running out of funds in the absence of Government grants.

The Indira Canteens, set up by the Siddharamaiah-led Congress Government over three years ago as a food subsidisation programme of the State, are now facing a serious financial crisis in city as the Government has not released funds from Feb. 2020 till Apr. 2021.

Speaking to Star of Mysore, canteen contractor Basavalingappa claimed that the MCC owes Rs. 4.20 crore to Indira Canteens in city. Pointing out that Indira Canteens are run with 70 percent grant from the MCC and the rest 30 percent from the District Administration, he said that the MCC owes Rs. 4.2 crore as of now and the civic body has stopped releasing funds. But now, the District Administration  is said to have released Rs. 50 lakh, which is yet to reach them, Basavalingappa added.

Continuing, he said that barring the ones at K.R. Hospital premises and at Alanahalli Circle, all nine other Indira Canteens in city have been disconnected with power for the past three months for non-payment of bills.

Maintaining that each Canteen owes Rs.10,000 to Rs.50,000  monthly power dues to CESC, he said that due to power disconnection, the canteens are forced to light candles during nights.

Asserting that Indira Canteen operators are  running the canteens by taking huge amount of loans, Basavalingappa said that the Government must understand their plight and come to their rescue by releasing funds as the Government has the responsibility of serving food to the poor under its food subsidisation programme. Noting that canteen employees are not paid salaries for months for want of funds, he said that clearance of dues by the Government will help them to pay the balance wages.

Free food to the poor at Indira canteens till May 24

Meanwhile, the State Government on Tuesday announced distribution of free food through Indira Canteens thrice a day across the State till May 24 in the wake of COVID induced lockdown.

The announcement will benefit the poor, street vendors and workers during the lockdown period. Currently, Indira Canteen charges Rs. 5 for breakfast and Rs.10 each for lunch and dinner.

Pointing out that upon learning to know about free food distribution, hundreds of people started queueing up before Indira Canteens hours before lunch and dinner, she said that free food will help street vendors, workers and the poor till May 24, the last date of lockdown.

The canteen contractors have continued their service by providing food to the poor even amidst economic crisis, she added.