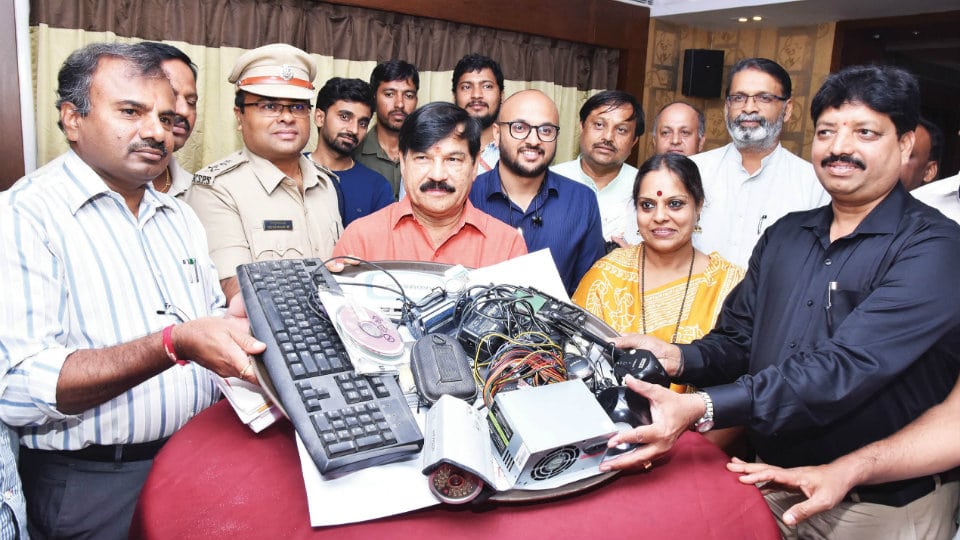 As part of the programme, a one-day e-waste collection drive will be launched on Sept. 17. Residents can handover e-waste to civic workers at their doorsteps. Disposal of e-waste which contains toxic material could pollute groundwater if left untreated.

Addressing a press conference at a private hotel in the city yesterday, MLA S.A. Ramdas said that Tejaswini Ananth Kumar, Managing Trustee, Adamya Chetana Foundation, Bengaluru, will inaugurate the programme that is being held for the first time in the State.

District Minister V. Somanna, MP Pratap Simha, MLAs G.T. Devegowda, Tanveer Sait, L. Nagendra and others will be present.  MCC Commissioner Gurudatta Hegde said that as per e-Waste Management Rules 2016, it was the responsibility of every citizen to ensure scientific disposal of e-waste and the aim of the drive was to ensure proper disposal of e-waste.

Residents can handover the waste to the civic workers, who visit each house across the city. There will be no collection of dry and wet waste on that day, he said. In addition, the civic body will also establish e-waste dropping centres at all nine zones and residents can drop waste there too. Dry and wet waste is being collected all these years but e-waste has been completely neglected. On Sept.17, e-waste such as keyboards, pen drives, obsolete electronic equipment, will be collected. The main aim of this exercise is to turn city Green. The e-waste thus collected will be dumped in nine zones and experts will assess the value of the waste and the revenue generated will be used for other purposes. Two or three companies have come forward to collect this waste, he said.

The Commissioner said the MCC has planned to collect e-waste once a month from houses. The drive would be held on the 17th of every month. When asked about the quantity of e-waste being generated in the city, he said, the civic body had not made any such estimate and the amount of e-waste would be ascertained after the collection.

There are nine zero waste units in the city with four to five nodal officers in-charge, apart from Assistant Commissioners and Environment Engineers. A Control Room has been set up with numbers 0821-2440890 or mobile 9449841195/96 and public can call to inform about e-waste.

Deputy Director for Public Instructions Panduranga said that school students have been asked to bring e-waste from their houses. The civic workers will collect the waste from the schools, he said. Deputy Commissioner of Police (Law and Order) M. Muthuraj said that the city Police will hand over the e-waste stored at Police Stations. The city has a total of 26 Police Stations. Founder of GSS Yoga Foundation, D. Srihari assured the support of the organisations.

B.S. Prashanth of Safe Wheels and others were present.