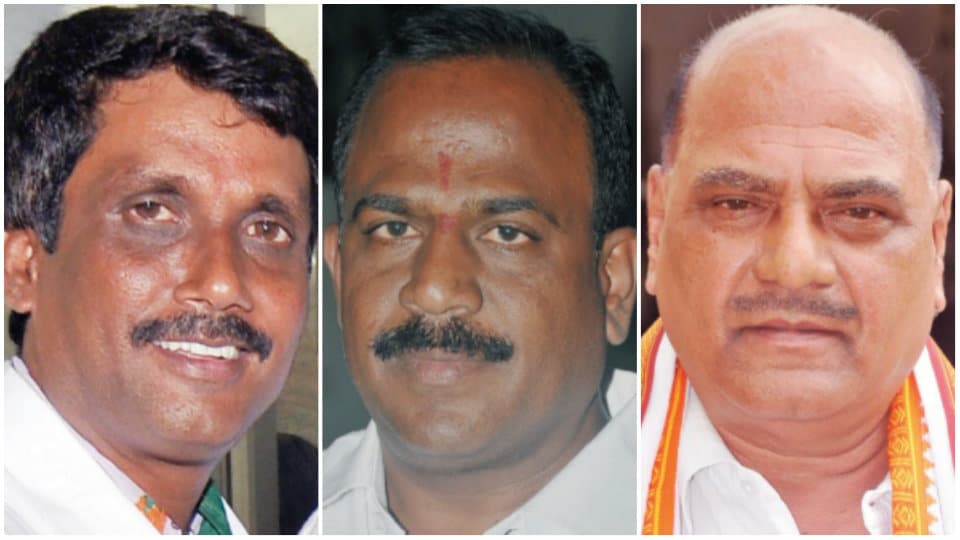 Mysuru: Three major political parties, the Congress, BJP and the JD(S), will fight it out in the by-elections wherein people of Mysuru City Corporation (MCC) Ward 32 will exercise their franchise tomorrow. The by-election has been necessitated following the conviction and the subsequent disqualification of JD(S) Corporator C. Mahadesh alias Avva Madesha, who held the Ward earlier.

The JD(S) has fielded SBM Manju while BJP has brought in K. Madesh and the Congress has projected former Mayor B.K. Prakash as its candidate. In all, 10,201 voters (5,053 men and 5,048 women) will cast their votes at 12 polling stations from 7 am to 5 pm. The counting of votes will be held on July 5.

ROWDY PARADE: Preparing for the election in a sensitive Ward, the city Police conducted a parade of rowdy-sheeters yesterday to ensure that there is no law and order problem. In all, 26 rowdy-sheeters from Paduvarahalli, V.V. Puram, Gokulam and surrounding areas were summoned to the City Police Commissioner’s Office and warned not to indulge in any anti-social activities. This morning too, 12 rowdy-sheeters were summoned for a similar purpose.

At the parades, DCP (law and order) Dr. H.T. Shekar Narasimharaja Assistant Commissioner of Police Umesh G. Shet, V.V. Puram inspector C.V. Ravi and Jayalakshmipuram Inspector C.M. Ravindra told the rowdy-sheeters that action (including booking them under IPC Sections that attract long-term prison term) will be taken against them if they try to disrupt the voting process.

They were told not to induce or threaten voters to vote for a particular candidate and not to indulge in groupisum. CCTVs have been installed at polling booths and at vantage points across the Ward and visuals will be screened to identify people who create trouble, the rowdy-sheeters were told. They have been told to stay away from the polling stations and not to contact voters over phone.

ARRANGEMENTS: The district administration has made elaborate arrangements for the peaceful polling tomorrow. Indelible ink will be applied on the little finger of the left hand. Voters need to produce any one of the 23 documents including Voters Identity Card, Aadhaar, DL, PAN card and identity card provided by State or Union government undertaking as identity proof before casting their votes.

Electronic Voting Machines (EVMs) will be used during the by-election and the EVMs have been examined by officials deputed by the Bharat Electronics Limited (BEL).

The administration has issued 30 ballot units and as many control units. Of these, 12 have been sent to the respective polling booths and 18 have been kept reserve (in case of malfunctioning).

The administration has appointed 56 personnel to manage the polling, and assigned three personnel to each polling station. Voters will not be allowed to carry their cellphones inside the stations. Officials said that security has been beefed up in and around the Ward in the wake of polling. They have asked voters to cast their ballots without fear.

Sale of liquor has been banned in Ward 32 limits from 7am tomorrow till the midnight of July 2. During the counting of votes July 5, the ban will be effective between 6 am and 8 pm. The votes will be counted at Maharaja’s Sanskrit College on New Sayyaji Rao Road on July 5.