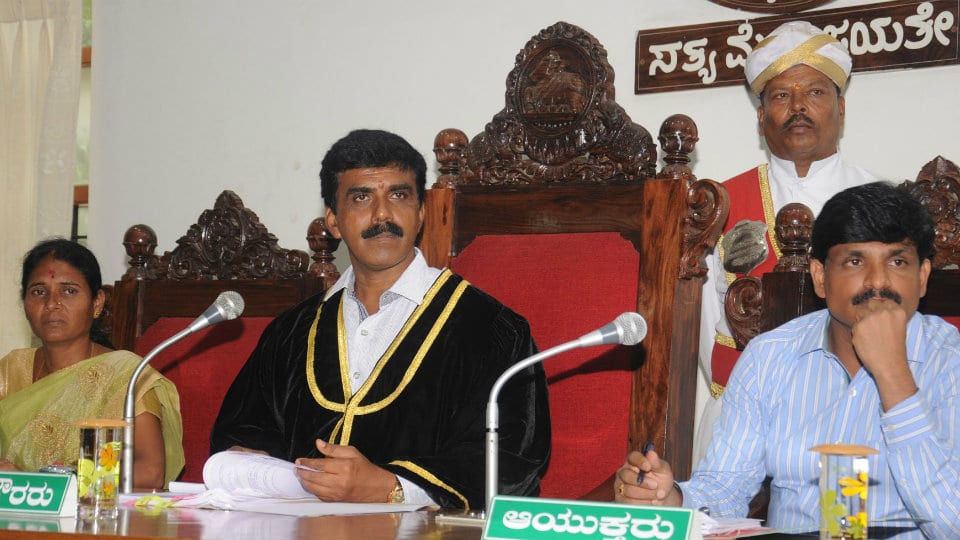 Mysuru: The rapid rise of vector-borne diseases in city over the last two months was elaborately discussed at the Mysuru City Corporation (MCC) Council meeting held yesterday at Nalwadi Krishnaraja Wadiyar Hall in the MCC premises.

Corporators, cutting across party lines, demanded that the Mayor must call fresh tenders to process garbage dumped in the yard at Vidyaranyapuram. The issue was raised by Kalyanagiri Corporator Shoukath Pasha who alleged that though 186 suspected dengue cases have already been reported in the city, the MCC failed to take up cleanliness drive.

He explained that the city generates nearly 700 tonnes of waste every day but MCC could process only 200 tonnes. Due to this, waste dumped on vacant places is left uncleared. The foul smell and mosquito and rodent menace have put the residents to hardships. Supporting Pasha, J.P. Nagar Corporator and former Mayor B.L. Bhyrappa said that residents of Vidyaranyapuram, J.P. Nagar and surrounding areas are unable to bear the foul smell emanating from the dumping yard.

Bhyrappa also threatened to stop the existing Zero-Waste Management Units, if the authorities fail to take up the measures. He asked the Mayor to convene a meeting with officials and Deputy Commissioner D. Randeep to discuss about waste segregation.

IL&FS Technologies that was given the responsibility of processing the waste, has given a letter stating that it  cannot continue work unless there is some modification in the tender, including the demand of tipping charges from the MCC   to the company.

“If concrete measures are not taken to reduce the problem of residents, I am ready to start a protest and die in the act,” he said.

Chamundipuram Corporator Ramprasad said that along with fresh tenders for processing garbage at the yard, officials should also monitor Zero-Waste Management Units set up in the Ward as a majority are defunct.

Responding to the Corporators, Mayor Ravikumar said that he will organise a meeting with the DC at the earliest and discuss a permanent resolution to the issue.

Construction of the four-storey Mayura Commercial Complex on Kantharaj Urs Road was also discussed. The Council agreed to appoint experts to prepare a comprehensive project plan as per the suggestions of the Infrastructure Development Department.

After 31 years, MCC took up the issue before the Council yesterday to complete it under Public-Private Partnership model and hand over the building to a bidder for 20 years. The MCC can earn Rs. 3.75 crore out of this complex.

On October 30, 1985, the MCC took the decision to construct a commercial complex and entrusted the work to Khode Engineering. The initial estimated cost of the building was Rs. 2.75 crore and the then Government had approved Rs. 1.87crore but the works were suspended as the contractor failed to complete the work on time. In 2005, a fresh tender was floated but the project was again stopped due to various reasons.

The Karnataka Water and Sanitation Fund, a Government-run Trust, has now prepared a report on the project, suggesting completion of the project.