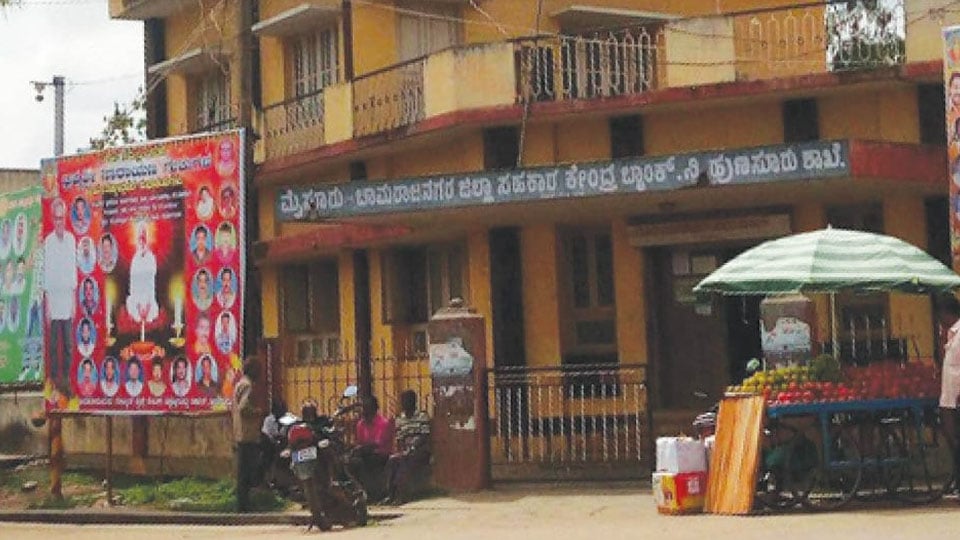 Hunsur: A criminal case has been registered against four Bank staff including two Managers of Mysuru-Chamarajanagar District Central Co-operative (MCDCC)Bank in connection with the alleged misappropriation of Rs. 27 crore in Hunsur and Bilikere branches of the Bank.

The current Manager of Bilikere branch M.T. Shashidhar had lodged a complaint on Sept.17 against relieved Hunsur Branch Manager Ramappa Poojar, former Manager of Bilikere branch Niranjan, Hunsur Branch Office Supervisor B.B. Krishna and another staff, accusing them of involvement  in the misappropriation, following which the Bilikere Police on Sept.17, registered a case against them under Sections 409, 471, 477A, 420 and 34 of the Indian Penal Code (IPC).

The case relating to this has been transferred to District Crime Investigation Bureau (DCIB). Inspector Kantharaju is expected to collect the records and start the investigation this morning.

Following the registration of the case, a team of Hunsur Police led by Circle Inspector K.C. Poovaiah visited Mysuru to trace former Bank Managers Ramappa Poojar and Niranjan, who have gone absconding.

But Ramappa Poojar’s house in Vijayanagar, Mysuru was found locked while Niranjan was not found at his house in Sharadadevi Nagar, Mysuru.

Later, speaking to SOM, Hiriyanna said that, he had visited the Bank branches to gather information asked by the SP.

Maintaining that Hunsur branch Manager Ramappa Poojar and Bilikere branch Manager Niranjan have been suspended, he said that all others who are found to be indulged in the scam too will be suspended.