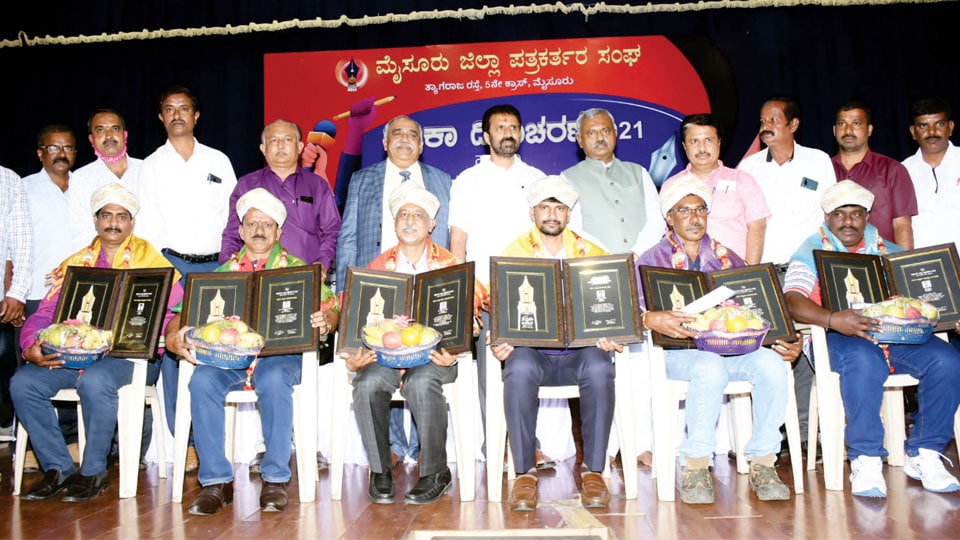 Mysore/Mysuru: Highlighting the role of the press and media in the all-round growth of the country, University of Mysore (UoM) Vice-Chancellor (VC) Prof. G. Hemantha Kumar said that it has rightly been said that the press is the fourth pillar of Democracy, with the other three being Legislature, Executive and Judiciary.

He was speaking as the guest of honour at the MDJA (Mysuru District Journalists Association) Annual Awards Presentation Ceremony and Press-Day -2021 celebrations organised at Rani Bahadur Auditorium, Manasagangothri, on Hunsur Road in city this morning.

Observing that the Press is an independent body focussing on all rural and urban issues, he said that the Press Day is celebrated on July 1 every year, marking the launch of the first Kannada newspaper ‘Mangaluru Samachara,’ which was first published from Mangaluru by Rev. Herman Frederick, a German religious preacher, on July 1, 1843.

Noting that it will not be wrong to say that press form the basis of Journalistic literature, Prof. Hemantha Kumar underlined the role of media in informing and educating the public on the happenings going on in the world every moment.

Maintaining that the press and media are an integral part of the civil society, he said that they have a special role in highlighting  the wrongdoings or lapses on the part of the society.

Pointing out that science and technology have propelled the growth of media by leaps and bounds over the years, with quick and accurate information about the incidents as they do happen, he said that however, the online news portals have  started occupying the space of the print media.

Asserting that the electronic media is growing by the day with the support of technology, he said, still, the common man prefers reading newspapers every day in the morning while having coffee. Contending that one can feel the happiness and contentment that he/ she gets when going through the pages of newspapers everyday, the VC said that he is proud to declare that he is one among them.

Reiterating that the print media has not lost its flavour while competing with other forms of media, he said that newspaper reports  must be factual, objective and accurate. Recalling the work of journalists during the COVID crisis, he said that it is happy to note that they displayed their professionalism amidst the global crisis.

MDJA President S.T. Ravikumar (RK), in his address, sought a site at an appropriate place for the construction of MDJA Bhavan. Pointing out that many journalists of Mysuru do not own houses, he appealed the Government to give priority for journalists in the allotment of houses under the Group Housing Scheme planned by Mysuru Urban Development Authority (MUDA) in the city.

District Minister S.T. Somashekar, who spoke after presenting the awards to journalists, said that he was thankful to Journalists for carrying reports on the actual number of COVID deaths in the district as it enabled the eligible  families of all the COVID dead to get Government compensation of Rs. 1 lakh each.

Responding to the plea of MDJA President on houses for journalists who do not own houses, Somashekar declared that MUDA’s Group Housing Scheme will be approved shortly by the Government and measures will be taken for allotment of houses on priority for journalists.

“MDJA has earned a special reputation in the State for outstanding journalism practices. I would always carry facts and figures with me whenever I happen to visit Mysuru as I knew that I have to answer prudent and probing questions asked by Mysuru journalists. I will make efforts to see that a CA site is allotted for MDJA,” he said and added that it was virtue for him to honour award-winning journalists of Mysuru, which is known as the Cultural Capital of the State.

Somashekar also announced that he would personally give Rs. 50,000 each to the families of five journalists of Mysuru district who died during the COVID crisis.

A 12-minute documentary titled ‘Humanity,’ focussing on the crisis triggered by the COVID-19 pandemic was screened on the occasion. The documentary was made by city-based journalist Lohit Hanumanthappa.

Best Report in English: ‘Hoof Care: The saga behind bare hands’ by Rajkumar Bhavasar (RKB) in Star of Mysore (SOM).

The following achievers in the field were also feted  on the occasion: