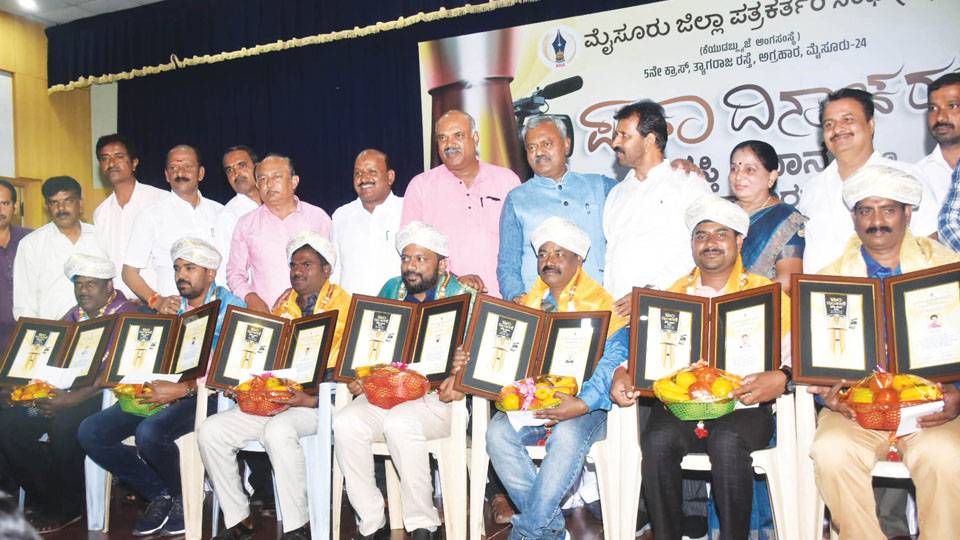 Mysore/Mysuru: Announcing that a CA (Civic Amenities) site has been allotted to Mysuru District Journalists Association (MDJA) near Mysore Race Course (MRC), District In-charge Minister S.T. Somashekar assured that he would talk to the Chief Minister and the District Administration on releasing grants for purchase of the site and construction of the building.

He was speaking after inaugurating Newspaper Day celebration organised by MDJA at Rani Bahadur Auditorium on Hunsur Road here this morning, during which Annual Journalism Awards and Pratibha Puraskar to meritorious children of MDJA members were presented.

Lauding the MDJA for celebrating Newspaper Day in a purposeful manner, Somashekar said that the presentation of Pratibha Puraskar to meritorious children of journalists is a good development.

Recounting the work of journalists during the COVID pandemic, Somashekar said that the District Administration received some useful tips from scribes, which helped the Government a lot in better handling of the crisis.

“I have closely seen the work of Mysuru Journalists for the last two-and-half-years as District In-charge Minister. Journalists work under several risks for reaching out latest news to the readers at the fastest time possible, which should be acknowledged by everyone. Scribes have worked with great responsibility during all times of crisis including COVID pandemic, rain havoc and other natural disasters, for which the Government compliments them,” District In-charge Minister S.T. Somashekar said.

Tourism hub: Referring to Dasara celebrations, the District Minister said that the Government has decided to celebrate Dasara in a grand manner this year and preparations are going on in that direction. Apart from Dasara, Chief Minister Bommai  is also focussed on making Mysuru a tourism hub of international standing, he added.

MDJA President S.T. Ravikumar, in his address, said as told by the District Minister, Journalists of Mysuru have worked hard under testing and trying times during the two years of COVID pandemic. Thanking all those who helped the Journalists during the pandemic and other crisis, Ravikumar said that the current MDJA building is located in a very busy residential area. Now with the allotment of a CA site, a full-fledged building will be constructed, he said and thanked District Minister S.T. Somashekar and former MUDA Chairman H.V. Rajeev for their initiatives in the allotment of CA site.

Thanking the Minister for making an announcement on allotment of houses to scribes under Group Housing scheme, the MDJA President appealed the Minister to ensure that houses are available at an affordable price to journalists.

Ravikumar also said that MLCs C.N. Manjegowda and Dr. D. Thimmaiah have announced release of Rs.25 lakh each from their Local Area Development Fund for the construction of the new MDJA building that will come up on the CA site, for which he was thankful to them.

Somashekar also presented a cheque of Rs. 50,000 to each of the families of three deceased Journalists — C.Maheshwaran of Mysuru and Srinivasmurthy and Ravishankar of Nanjangud, on the occasion.

Pratibha Puraskara was presented to meritorious children of Journalists who scored high marks in SSLC and PUC (2021-22).

The following Journalists were conferred Annual MDJA awards for the year 2021-22:

Best Photograph: M.N. Lakshminarayana Yadav, Photographer, Mysuru Mithra and Star of Mysore [Photo of Fire & Emergency Services staff rescuing an elderly citizen from the debris of old house that had collapsed due to rain]

The following senior journalists were also  felicitated on the occasion: