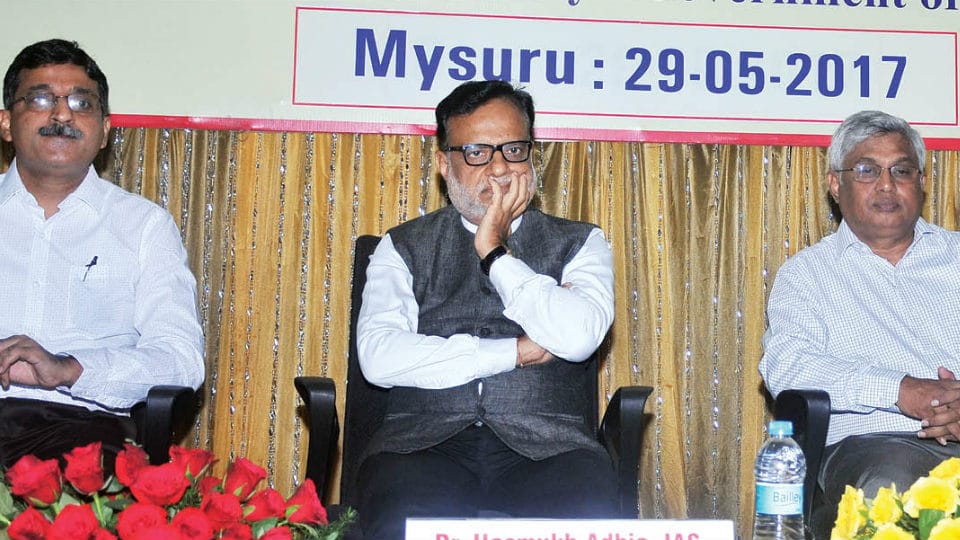 Mysuru: Goods and Services Tax (GST) that will be applicable in the country from July 1, will expose the tax evader and benefit the ethical dealer with the help of the software that is being introduced to detect every transaction directly or indirectly, said Revenue Secretary, Government of India, Dr. Hasmukh Adhia.

Speaking at a meeting organised by the Chief Commissioner of Central Excise, Customs and Service Tax, Mysore Zone and Commissioner of Commercial Taxes Department, Karnataka, at Rani Bahadur Institute of Management Sciences here this morning, he said a tax evader or defaulter cannot escape once the GST is introduced.

“The software is very robust and no one can tamper, hack or change it. It is the duty of every manufacturer, dealer and businessman not to support unethical dealer. If he cheats, the software will detect him and there is no escape route,” said Dr. Adhia.

Earlier there were 37 types of taxes. There were also differences in taxes from State to State. Hence, if the tax on a particular commodity was less in one State and more on the other, the business would move automatically to the State where it was less. Such discrepancies have been done away with as GST means uniform tax rates across the country, he said.

“If people have problems understanding GST, the Centre has set up a Twitter handle [email protected] where they can address the issues. Besides, there will be full support from the Government, as officers will be stationed at the centres to reply to queries and doubts,” said Dr. Adhia and called upon the people  to support it as it would benefit the people and the nation.

Addressing the queries of the people that were raised during the interaction session, Dr. Adhia said that every aspect of the problem had been addressed by the GST and hence no changes can be entertained at this time.

Reply to a query raised by the members of the Mysore Race Club (MRC) regarding the tote tax of 28 pc, he said that if one goes through the GST properly then most of the issues raised like extra tax will also be imposed on assets and properties which would become a burden for MRC has also been addressed, he said.

One person who had raised on question on jerkin export, was told that the tax would be refunded in 90 days. The hoteliers demand of reducing the tax from 12 pc to 5 percent was also rejected.

Earlier, Ritvik Pandey, Commissioner of Commercial Taxes, Karnataka, in his inaugural address said that GST will be implemented in one month and no one need panic if everyone files the tax return promptly. The migration from State to Central taxes is already happening and this is the need of the hour.

Central Excise Deputy Commissioner Ravichandra explained in detail about the GST through power point presentation how the single tax system will replace the existing multiple tax one.  In the new GST, the input tax credit, e-way bill, valuation  in GST, assessment and audit, will all be addressed and taxes can be paid through credit and debit cards online.

The other friendly-features like ‘GST Suvidha Providers’ mobile aps is being introduced, he said.