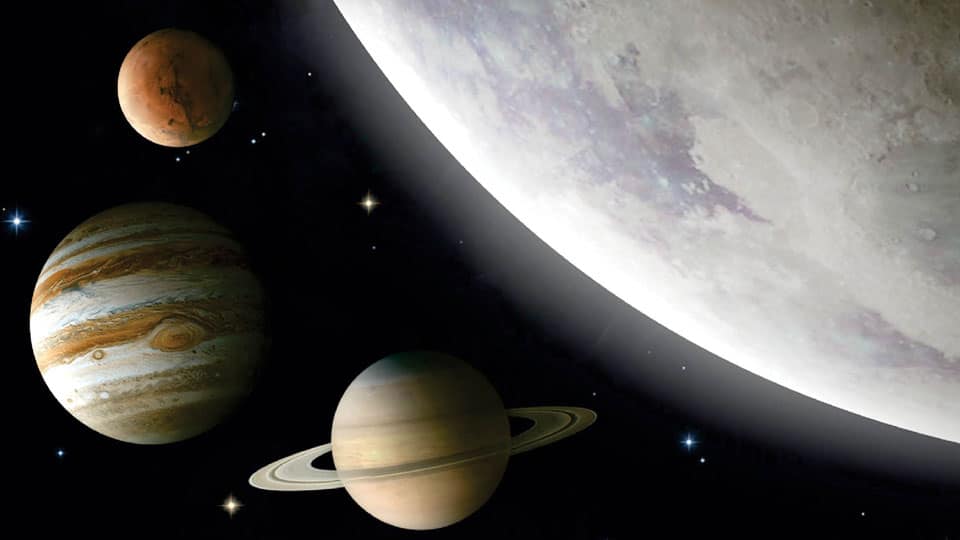 Mellifluous Rendezvous of Mars, Jupiter and Saturn with Moon

From time immemorial, man has always been inquisitive by nature. He has been exploring the sky very deeply and effectively. None can rival the glory of star-studded night sky, being strewn with unassailable and unprecedented celestial objects.

Many astronomical objects have captivated humans with love, affection, passion and sympathy. The three celebrated planets, namely Mars, Jupiter and Saturn, can be seen evidently with moon in the dawn or morning sky on Mar. 18 with ease, energy and enthusiasm.

‘Planet Watching’ is one of the most fascinating, enjoyable and mesmerising experience. If we witness the sky on a dark, clear night we can see many hundreds of stars and few terrestrial planets. They are not alike; they are of different colours, and of course they differ in brightness. Planets move slowly among the stars, following patterns that repeat over months or years.

Venus is regarded to the brightest planet in our Solar System. This planet can be seen very clearly in night sky at around 7 pm in the western direction in the constellation Pisces directly without using any astronomical instruments. This brilliant and astounding planet has mesmerised humans from time immemorial by revealing its exceptional planetary features. Venus is second major planet in order of distance from the Sun. Even novice star-gazers will have no difficulty finding brilliant Venus, often called the ‘morning’ or ‘evening’ star.

In a telescope, Venus’ opaque clouds usually appear featureless. Sometimes, however, observers are able to make out faint, dark patches on the white disk, probably the cloud features.  During the third week of March, the planet can be clearly seen in the western sky with mesmerising brightness.

Mars is the resplendent yellow-orange planet in the Solar System. Mars reaches opposition this year and the best visibility every 780 days on average, about two years, seven weeks. Look for Mars to be high over the southeast horizon before sunrise. During morning, one can clearly see the red planet at around 5 am (IST) over the Southeast direction. Mars can appear at any place in the sky on the ecliptic, rather than always staying near the Sun, like Mercury and Venus. On first viewing Mars by telescope, beginners are often startled by its smallness, even at its closest approach. Mars appears no larger than a lunar crater. Typical first looks show an amber disk, some faint markings, and may be a whitish polar cap. On Oct.13 of this year, Mars will be close to earth.

Jupiter is the fifth planet from the Sun and the largest of the Solar System, easily perceptible with the unaided eye. Jupiter can be seen around 4.45 am (IST) over the southeast horizon at the beginning of the month, and quickly becomes a bright and noticeable morning planet.

Jupiter’s disk offers the backyard astronomer a wealth of ever-changing detail that can be seen in almost any telescope. Bright zones and dark belts vary in strength and change position slightly. Jupiter’s most famous single feature is the Great Red Spot, a vast and turbulent eddy located just below the south equatorial belt that has been observed for at least 300 years. A telescope or binocular lets you experience the famous Galilean moons of Jupiter. This is the other planet which can be seen effortlessly in the morning sky which is located close to Mars. This planet has been considered to be the biggest planet in the Solar System.

READ ALSO  Once in a Blue Moon: How Mysuru is set to witness the rare celestial event

With the assistance of an astronomical telescope, one can undoubtedly notice the perceptibility of four satellites, namely Io, Europa, Ganymede and Callisto. On July 14, this planet reaches opposition with utmost accuracy and shall be the best time to see to this planet throughout the night.

Saturn is regarded to the most gorgeous planet in the solar system, which is popularly referred by the sobriquet “King of Planets.” On July 20, this planet reaches opposition with utmost accuracy and is the right time to see to this gorgeous planet. At around 4.30 am in March, it can be clearly noticed in the south-eastern direction. Saturn’s rings are well-known and were explored in great detail by the Voyager missions.

Saturn’s rings, an unmitigated, disc-like, effortlessly conspicuous with even a small telescope, which envelops Saturn. Saturn rises at about 1.30 am (IST) and will be visible throughout the morning sky, will be high over the western horizon during sunrise. Saturn is approximately between these two first magnitude stars, and slightly brighter. Saturn is probably the most memorable sight in a telescope you can have. Kindly note, the magnitude of Venus is -4, Jupiter is -2.1 and Saturn is 0.7 and these planets can be seen in single constellation, Sagittarius.

If the magnitude is negative, the planet exhibits maximum brightness. Remember that, Mars, Jupiter and Saturn can be noticed between the constellations — Capricorn and Sagittarius.

Enjoy watching these four dominating planets in March. These planets can be seen through naked eyes avoiding the sophistication. Telescopes for planet watching need sturdy mountings and high-quality optics. Most observers use powers of 200x or less, due to unsettled seeing. Also useful are coloured filters, which accentuate specific features on planets. So it is the high time for the amateur astronomers and sky-gazers to fix the stares in the morning and night sky to witness these planets. Also, it is the best time to accomplish astrophotography by capturing these giant planets. Enjoy this and spread the awareness of Observational Astronomy.