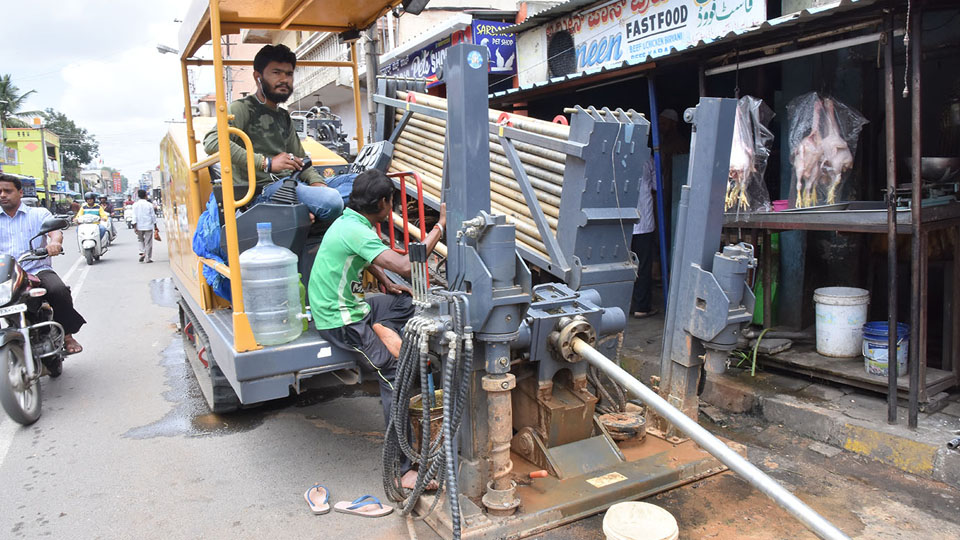 Frayed cables — often live — dangle at head-height on many streets, making safe navigation of the already treacherous pavements even harder. Other wires are left to bunch up near poles, creeping hazardously across the narrow footpaths. Like many city streets, the thoroughfares of Mysuru are festooned with electrical cables, a black web that hangs menacingly overhead.

But ‘Cable-Able’ Chamundeshwari Electricity Supply Company (CESC) authorities are now untangling the cables and moving them underground as part of an urban renewal. The aim is to make Mysuru not only safer but easier on the eyes and less prone to blackouts. Walk with this Weekend Star Supplement to understand the magnitude of work that is being undertaken by CESC as they lay underground cables stage-by-stage.

This desire surges into prominence whenever natural disasters cause destruction on the overhead distribution and transmission networks across the country. In the past, the largest obstacle to placing overhead power lines underground has been the higher cost of installation and maintenance.

Although overhead power lines are typically more economical, they are susceptible to damage from wind-borne tree branches, debris and high wind conditions. The damages can cause extended power outages that in extreme cases cannot be restored for days or even weeks.

The cost for repairing the physical damages can be in crores of rupees. Underground lines are better protected against weather and other conditions that can impact overhead lines. With underground cables, there is aesthetic appeal, lower risk of electrocution, low voltage drop and low chances of stealing power.

This is the reason why Chamundeshwari Electricity Company (CESC) is undertaking a massive work of installing cables under earth across the city. While most of the areas have been completed, sporting trendy boxes on the road sides, still a good amount of work has to be completed.

A December 2018 World Bank report said India loses 4 percent of its GDP due to inefficiency in power distribution, ranking it 80th among 137 economies in terms of “reliability of power supply”. India has the dubious distinction of losing 20 percent of electricity in transmission and distribution, one of the highest in the world. A lot of it can be addressed by underground cabling.

The massive underground laying project is worth over Rs. 370 crore. Works are being undertaken all over the city including N.R. Mohalla, V.V. Mohalla, Kuvempunagar, Hootagalli and Manasagangothri.

Works on this project began two years back and L&T and AFTL have been given the two-year contract and there are many agencies that are affiliated to those companies who are carrying out the work, said N.R. Mohalla CESC Executive Engineer H.S. Swamy.

CESC has mobilised the money from various sources including bank loans and has paid Rs. 14 crore to the Mysuru City Corporation to dig the roads. This is precision work undertaken by qualified electrical engineers who have come from various places in Karnataka and are supervised by CESC Assistant Executive Engineers.

READ ALSO  CHRISTMASS QUEST: In search of real Christmas beneath the glitz

First Person Account: Skilled work with no room for errors

After visiting a couple of locations where the underground cabling work was being undertaken including Kuvempunagar, N.R. Mohalla and Rama Vilas Road, Star of Mysore faced a roadblock in collecting information as the ground-level workers were not authorised to speak and directed us to CESC higher-ups. Added to our woes was the rain which was pouring on the day of our visit and seeing our plight, a tea vendor handed over a cup of piping hot tea.

So, after the energising tea and walking futilely up and down the machine without understanding anything, SOM knocked the doors of higher officers scouting for information which they obliged as the work was being undertaken to beautify the city and to enhance its aesthetic appeal. Also, the officers wanted the public to know about the massive works being undertaken next to their doorstep and neighbourhood and Star of Mysore was their best bet.

Getting a brief from the officials, again it was back to the field. For a layman it looks like a pit being dug and cables are pushed by the machine. SOM realised that it was precision work and there was no room for errors.

Once the pit place is identified, a 0.9-metre pit is dug and the giant Horizontal Direction and Drilling Machine gets on to the job. Its sharp and slant front drills holes horizontally. An engineer, armed with a Digi-Tracker tracks the extent of the hole bored by the machine.

So advanced is the process that the sensor located at the tip of the drilling arm of the machine sends signals that are picked up by the Digi-Tracker. By just placing the Digi-Tracker above the road, engineers can identify the extent of the holes bored by the drilling machine.

Also, the machine driver is in close coordination with the person holding the Digi-Tracker. The Drilling Machine works on the normal boring principle and the arm will move either left or right, top or bottom if there are any blocks like rocks.

Every move is precision-driven and engineers have to ensure that the process is glitch-free. One small mistake, the machine might end up drilling an underground sewage pipe and the area might be filled with stinky sullage.

Once the drilling is complete, a 3×400 square mm cable is laid as a main 11 KV line that is drawn from one end to another and from the main line, 3×240 square mm cables are drawn to provide connections to cluster of homes and shops in any given area. Pits are dug perfectly and closed to the original form and only then, workers can move further, digging pits. Rain or shine, the men are at work.

As Dasara is nearing, the Central Zone is geared up for laying underground cables and engineers are already on the job. “We have ’11 KV Maharaja and Rama Vilas Feeder Line’ from Doddakere Station Feeder. Work has begun on this crucial stretch. Underground cable laying is reliable and safe and even if the overhead power line fails, there is an alternative supply through the ground,” says CESC Assistant Executive Engineer R. Rudresh.

Central Division itself requires Rs. 149.97 crore for underground cable works as it is in the heart of the city and the Central Division has been chosen as Model Subdivision. Once the main High Tension (HT) 11 KV line is changed to underground, all the Low Tension (LT) line that supplies power from house to house will also be laid underground. These LT line carries 440 volts of power.

Feeder Pillar Boxes installed on the road sides will supply power in the new system. Instead of the overhead wires, these Feeder Pillar Boxes will supply power to 8 to 9 houses. As part of the meticulous work, CESC will do route marking with stone designs and mention the line, its power carrying capacity so that future CESC engineers can identify them in case of repairs.

From the Sub-division, a main line travels underground and at regular intervals of one kilometre there will be Control Points. The moment there is some problem in the main KV line, the Control Point next to the line trips.

CESC officials admit that streetlights are a major hurdle in the Central Zone as there are no clear-cut instructions from the Mysuru City Corporation (MCC). “We will replace the conductors on this stretch and if the MCC wants to put up ornamental poles for the streetlights to increase heritage beauty, the CESC will remove the existing poles. But the MCC has to decide on that and communicate to us,” say officials. Once the cables are laid on this crucial zone, streetlights will be a thing of the past.

A duct to lay pipes and power lines exists from K.R. Circle till Moulana Abul Kalam Azad Circle (Highway Circle). “Cable installation is an easy task here as already a facility is available. If such ducts are built by MCC it will be convenient for all civic agencies to carry out works of underground cables,” officials add.

In India, the average Municipal Corporation and Development agencies in a city don’t talk to each other. And in worst cases, they hamper each other’s work. But when the time comes to take the blame, they shamelessly point fingers at each other.

The massive underground cable work that is being undertaken by CESC is facing similar problems. Not appreciating the work, several roadblocks are created by Corporators and local politicians. CESC Engineers on the field say that day-to-day they face problems from the Mysuru City Corporation officials who are attached to Vani Vilas Water Works or UGD wing or MCC electricity wing.

“We always intimate them about the works that are being undertaken but sadly they have an indifferent attitude towards our works. Though it is a work for entire Mysuru and will benefit each and every citizen, the efforts are not appreciated and facilitated,” say CESC engineers.

“The CESC has already paid Rs. 14 crore to the MCC to dig up parts of the road. We have a concrete plan and we finish the road perfectly without leaving any gaps. Still in case of damage to MCC water pipes or UGD, the contractor has to bear the costs,” said officials.

The biggest hurdle that is slowing down the work is the attitude of Corporators of some areas. “They openly threaten our contractors. Shockingly they demand their share of money when the roads in their area are dug up. Many times, we have to intervene and get the work done as early as possible,” say engineers.

“While some Corporators have realised the value of our works and are cooperating with us, there are some who are demanding money from us to undertake the works. This has hindered the underground cable laying and we are racing against deadline,” they add.