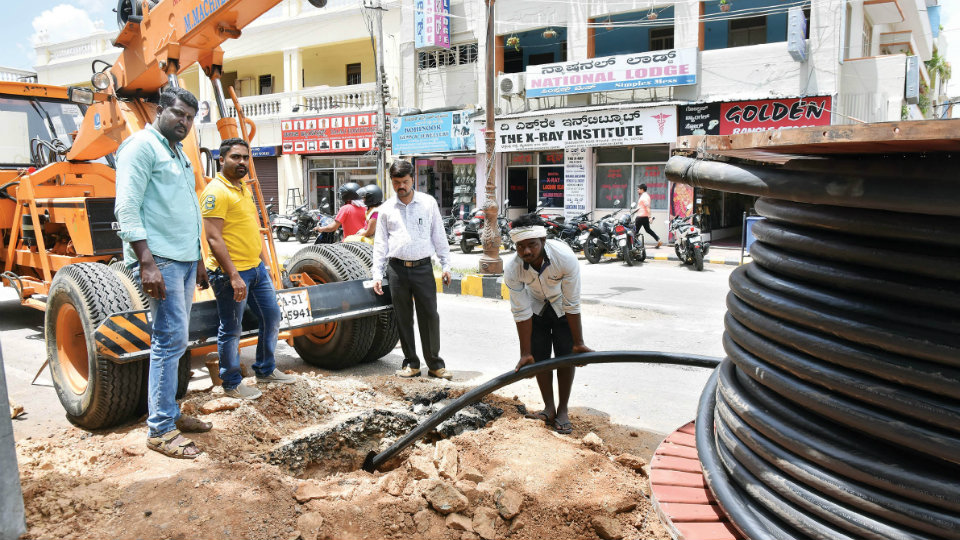 City to be free of overhead electric wires and poles

Mysore: Overhead power cables could be a thing of the past soon as Chamundeshwari Electricity Supply Company (CESC) has started a massive project to lay underground power cables at a cost of Rs. 370 crore. While works are being undertaken in a stage-by-stage process, the focus is on the Central Zone in the Central Business District as Dasara is fast approaching.

Works are being undertaken all over the city including N.R. Mohalla, V.V. Mohalla, Kuvempunagar, Hootagalli and Manasagangothri and the CESC has already paid Rs. 14 crore to the Mysuru City Corporation to dig parts of the road to lay the cables. It is a massive exercise being implemented by L&T and AFTL, supervised by a dedicated team of CESC Executive Engineers and Assistant Executive Engineers.

Overhead cables hanging precariously low pose grave threat to residents. By CESC’s own admission, many people have already died this year after being electrocuted by suspended high-tension wires. Underground cables eliminate this threat.

Though the underground cable project is more expensive than aerial bunching of cables, CESC officials said that underground cables will help improve reliability in power supply, reduce the number of accidents caused by overhead wires, and improve the aesthetics of the city.

“We have GIS mapping for the project and have point-to-point location in case of a fault. We will have more than one source of power, which means we can isolate a faulty source and supply from the other source,” explained a CESC official.

CESC is using High Definition Digging Mechanism (Horizontal Directional Drilling) to lay the cables underground. Rather than digging up the entire road, 0.9-metre pits are being dug out for every few metres.

2 COMMENTS ON THIS POST To “Electric cables to go UNDERGROUND”