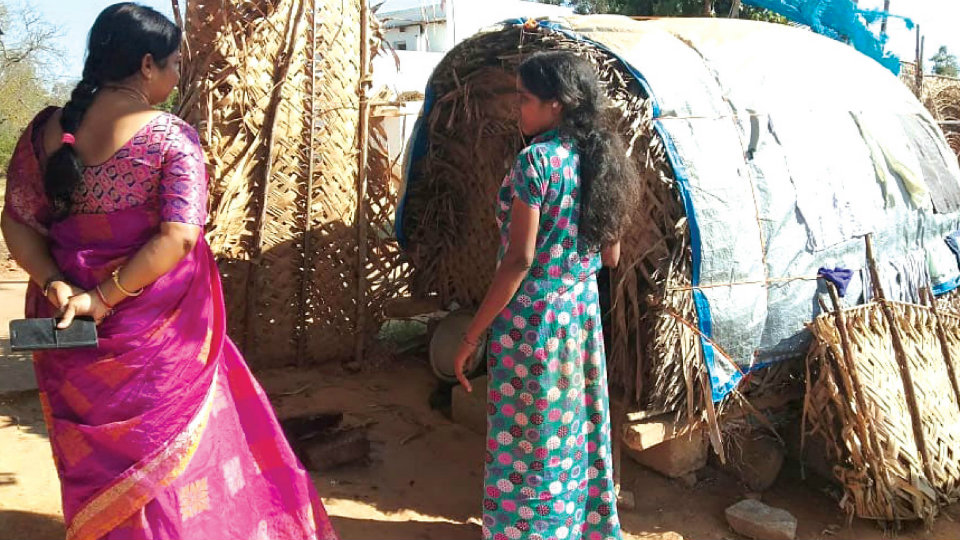 Mandya: At a time when the world is witnessing rapid advancements in science and technology like never before, here is a case where menstruating women and lactating mothers are barred from entering the village.

Women and young girls of Gollarahatti (Gollaradoddi) in Nagamangala Taluk of the district dread in trepidation as they get ready to spend three to four days at a hut outside their village when they are banished during menstruation. Even lactating mothers are forced to stay at these huts outside the village as they are considered a ‘bad omen.’ During rainy season, it is all the more difficult to stay in a hut as the rainwater seeps in.

Gollaradoddi in Nagamangala Taluk has become notorious after villagers, falling prey to superstitious beliefs, have banned menstruating women and lactating mothers from entering the village. The villagers believe that entry of such women is a bad omen for the village.

Most of the villagers here are overcome by superstition and hence are adamant on following this ominous practice even during this modern era. Once women menstruate, they are driven out of their homes for a period of five days and are forced to stay at small huts specially built for them on the outskirts of the village.

Although the villagers are educated on the effects of this evil and inhuman practice, they seem adamant on continuing with the blind belief.

These huts lack even a proper bed, let alone electricity and other basic amenities. Most of them have temporary bathrooms made with bamboo, gunny bags and coconut fronds.  Girl students miss school while they are in the huts and many times are unable to attend school exams.

With this inhuman practice going on unchecked, the District Administration, especially the Social Welfare Department and the Women and Child Development Department, seem to have not taken measures to save menstruating girls and women, lactating mothers from this agony.

Even as the Government boasts of women-centric initiatives such as ‘Beti Bachao, Beti Padhao,’ the situation of women in this sleepy Nagamangala village of Gollaradoddi is unfathomable as women are left to fend for themselves in make-shift huts and shanties.

The Government must act at least now and take stern measures for ending this evil practice.

Reacting to this practise, Chikkathayamma, an elderly woman of the village, said that no woman is left alone to fend for herself. A few elderly women of the village will accompany them in hutments. The practice is driven by a superstitious belief that keeping menstruating girls and lactating women at homes will bring a bad omen for family and this belief deeply entrenched in the minds of the villagers. She added that it is an age-old practice that is being followed for generations.

Another elderly woman Venkatamma said that menstruating girls and women are kept out of their homes for five days, while girls who attain puberty are kept out for a month. Lactating mothers are denied entry to the village for three months.

Even male members of the family are supportive of this belief and the practice is on for decades, she said and added that the villagers rely on God to safeguard such women who are kept out of their homes.