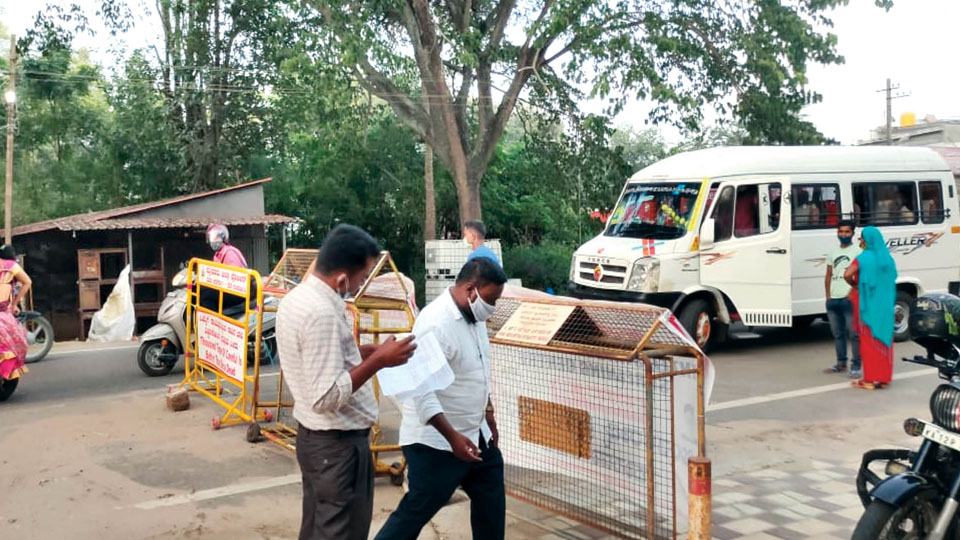 Kushalnagar: Kodagu’s positivity rate is showing a downward trend in the last two days. But what is alarming is the spectre of infections travelling undetected from borders as there is a huge influx of migrant workers who are sneaking into the district without being screened. This has sparked concerns about a surge in cases as there is no arrangement to test the returnees at the borders.

Hundreds of them are coming to work in coffee estates in this hilly district from Assam and Bihar and even Bangladesh (with valid Indian ID proof), causing major concerns of infections being spread. On an average, over 10 to 12 vehicles, each carrying 14 to 17 workers (including families) enter the district daily, mainly from Koppa Check-Post in Mysuru District.

While there is some casual checking of COVID-negative reports at Koppa Check- Post, there is no checking whatsoever at the Kushalnagar Check-Post from where the workers are taken to various interior coffee estates. These workers come from Assam and Bihar in trains to Bengaluru and come to Kodagu in the passenger vehicles arranged by their agents.

No basic entries too

Officials manning the Check-Posts don’t even make the basic entries and are not checking the COVID-negative reports. All vehicles are allowed free entry. At the Koppa Check-Post, however, some vehicles (tempo travellers) are checked but workers are allowed entry subsequently.

As there is free inter-district, inter-State and intra-district movement now, the risk factor is high as they could be virus carriers. While officials from the Police and Revenue Departments are present in the Check-Posts, both are not taking up the job of screening migrants. The migrant workers easily get permission from Mysuru Check-Post to enter Kodagu.

Coffee production has always been dependant on outsiders. Every year, more than 10,000 people from Assam and other States are employed in many estates as since many years, the district has been dependant on workers from North-Eastern States and from Odisha, Uttar Pradesh and also Madhya Pradesh.

They first came to Kodagu and gradually spread to Hassan and Chikmagalur districts, earning daily wages. The estate owners hire them through agents and the workers come here because they don’t get enough work at home. Here both men and women are paid daily and that is the reason why they bring their families too.

Many planters have built colonies for the workers in their estates and rooms are allotted to families. They make partitions within and set up their tiny kitchens within the available space. Brought to Kodagu by agents as per the requirement mentioned by estate owners and managers, the agents never come into picture.

Once the number of labourers is conveyed to the local agents, they contact the agents in Assam and Bihar who book train tickets for the workers to travel. Everything is done professionally including train tickets, travel to Bengaluru and pick-up from there to Satellite Bus Stand in passenger vehicles on Mysuru Road. Tempo Travellers are hired to ship them to Kodagu and even the vehicle rent is paid online and nowhere the agent comes into limelight.

Reacting on the issue to Star of Mysore, Kodagu District Health Officer Dr. Mohan said that as there are no travel restrictions now, they have no powers to check vehicles. “It is no secret that thousands of migrants work in Kodagu estates. It is also well-known that many of these labourers are returning and we do not have the powers to check them,” he said.

Admitting that migrant influx carries the risk of infection, Dr. Mohan said that he would bring the issue to the notice of Deputy Commissioner Charulata Somal so that some checking can be done to ensure the safety of Kodagu residents at a time when the positivity is on the declining trend.

Kushalnagar Circler Inspector of Police Mahesh said that he was not aware of the migrant influx. “We have CCTV cameras at Check-Posts and steps will be taken immediately to screen all vehicles that are carrying migrants from other States. We will not prevent vehicles of the district and inconvenience locals but we will check passenger vehicles coming from Bengaluru and Mysuru,” he said.