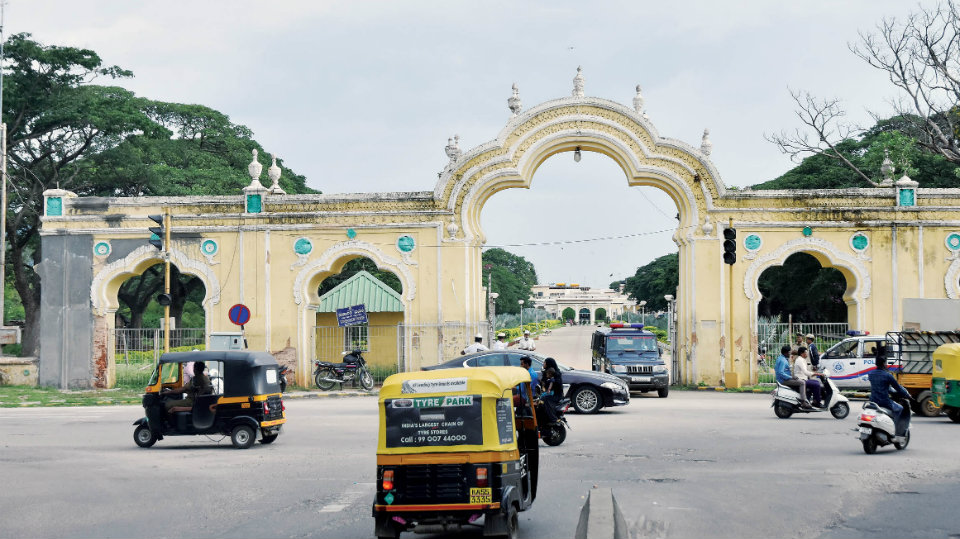 Minister Somanna to get ugly Arch Gate repaired for Dasara

Mysuru:  In the course of widening and development work of Abba Road from Five Lights Circle to Hyder Ali Road into a six-lane road, near the 150-year-old Government Guest House in Nazarbad last year, the ornate and massive heritage Arch Gate was damaged. The historic structure now stands as an orphan and is an eyesore.

Though an attempt was made to repair it immediately, the Heritage Committee came into the scene and stopped the work saying that the heritage structure was not being properly repaired for the purpose of restoring it. They said that the work on the damaged historical arch as per the heritage building protection norms without demolishing and damaging its originality as per the guidelines laid down by Department of Archaeology, Museums and Heritage will be taken up by the Department itself.

Since then the Arch Gate remains as it was. Now that lakhs of visitors would come for Dasara from Bengaluru and other places and most of them would be travelling on this particular road to the down-town city and Mysore Palace, naturally this vandalised Arch Gate would hit their eyes as they enter the city.

When this matter was brought to the notice of MLA S.A. Ramdas by a member of the public, a promise was made to get it ready for Dasara. However, it never happened and another MLA under whose Constituency the Arch Gate comes (Tanveer Sait) was not available for contact, said a concerned citizen of the city.

As a result, to this day, the Arch Gate remains an eyesore with some small trees growing on top of it and its outer plastering peeling off, presenting an ugly site.

This morning, a concerned citizen telephoned Star of Mysore office to say that he had spoken to the Mysuru District in-Charge Minister V. Somanna who had promised to get it done urgently before Dasara. In a sarcastic way the caller said, “Let us pray to Chamundeshwari.”