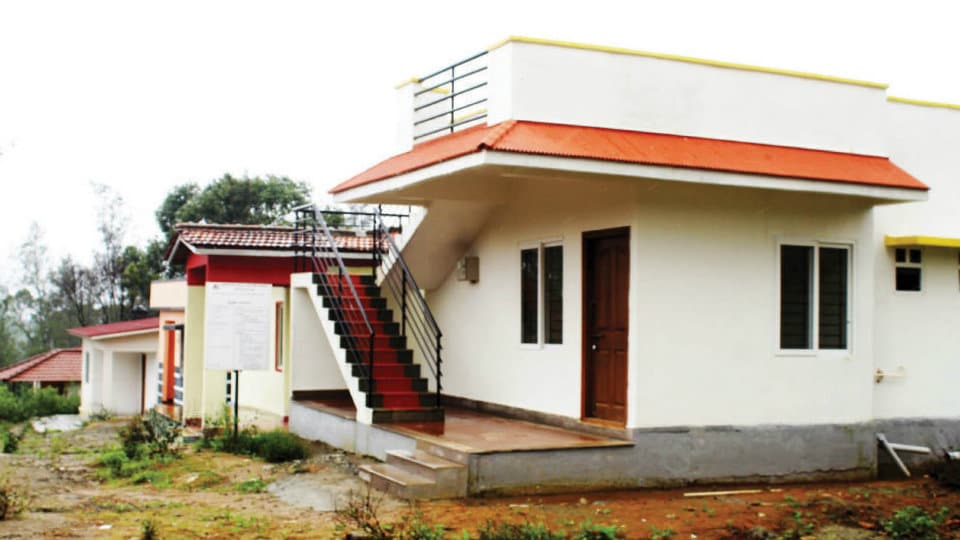 Madikeri:  Anti-social elements in and around Madikeri have a new address to carry out their nocturnal illegal activities including gambling, consuming alcohol and prostitution — model houses built for the flood affected victims in the district. Nobody would have questioned them if they had not vandalised the houses.

Yes, the newly-built houses are being damaged by anti-social elements. Earlier, they used to do these things in abandoned buildings and deserted streets of Madikeri after dark. Now they have shifted their activities to the model houses that were constructed near the RTO office at K. Nidugane Gram Panchayat.

These model houses were constructed by eight agencies to choose the best model to rehabilitate the flood victims of Kodagu and now they have turned into a place for all illegal activities. Thieves have already decamped with doors and windows of a model house constructed by Composite Technologies. Even bulbs, holders and switches have been stolen.

Various models of the houses were constructed for the District Administration and State authorities to choose from to rehabilitate the victims. Now, these houses are idle and no one visits here anymore. Local villagers say that miscreants engage in consuming ganja, smoking and drinking alcohol and also prostitution in these houses.

It has been one year after the houses were constructed and in some of the houses, doors, windows and switch boards have been stolen. Also, people have vandalised the toilets by breaking the commodes and tiles. Water connection pipes have also been stolen.

Villagers said that after 5 pm, the RTO office is vacated by officers and the complex is deserted. There is no security here and the model houses built near the RTO office complex are frequented by anti-social elements after 6 pm.

They have demanded the District Administration and the agencies that have constructed the houses to post adequate security to the model houses before the structures turn a haunted place.