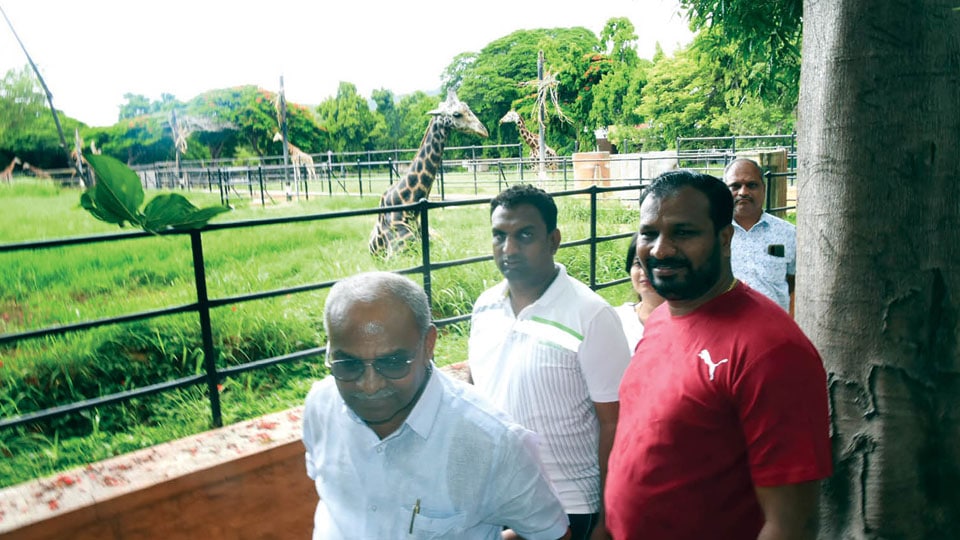 Mysore/Mysuru: Forest Minister Umesh Katti — under whose governance all the nine Zoos in Karnataka comes — took a detailed view of Sri Chamarajendra Zoological Gardens, popularly known as Mysuru Zoo, this morning and spent over five hours inside the Zoo campus and covered all the facilities provided to the denizens.

In his previous visits, the Minister spent hardly 15 to 20 minutes but today he came to the Zoo at 7 am and inspected the vast area till 12 noon.

He arrived at the Zoo after an overnight stay at the Government Guest House.

After the Zoo visit, he headed back to the Guest House to freshen up and came back to the Zoo to hold a review meeting of the Zoo and all the nine Zoos in the State that come under the management of Zoo Authority of Karnataka (ZAK).

After taking one broad round of the Zoo in a battery-operated vehicle, Umesh Katti visited the tiger house, leopard house and jaguar houses. Inspecting the new enclosures that are being set up for wallabies, baboons and ring-tailed lemurs that have arrived from foreign shores, the Minister took information about the new arrivals and also inspected the enclosures built for gorillas and chimpanzees from the donations from corporate companies and industrial houses.

He then paid a visit to the enclosures of Indian Gaur where the Zoo officials apprised the Minister that the proposal to shift over 21 Indian Gaurs to the Tyavarekoppa Tiger and Lion Safari in Shivamogga to launch the country’s first Indian Gaur Safari has not yet materialised as the State Government is yet to permit the same.

Umesh Katti later visited the section where manure is being prepared and also inspected the facilities where food for the animals is stored and the veterinary hospital where the injured animals are treated.

Later coming out of the Zoo campus, the Minister was all praise for the Mysuru Zoo that has been well-maintained and where the denizens are in their pink of health. “The Zoo was established by the Maharajas who had the vision and it has been expanded and maintained. One gets the experience of visiting the real forest inside the Zoo,” he said.

“Of all the Zoos in India, the Mysuru Zoo stands out as the model Zoo and I am really happy to see the facility in detail. Will initiate steps to make this a unique place that aims at conservation,” the Minister added.