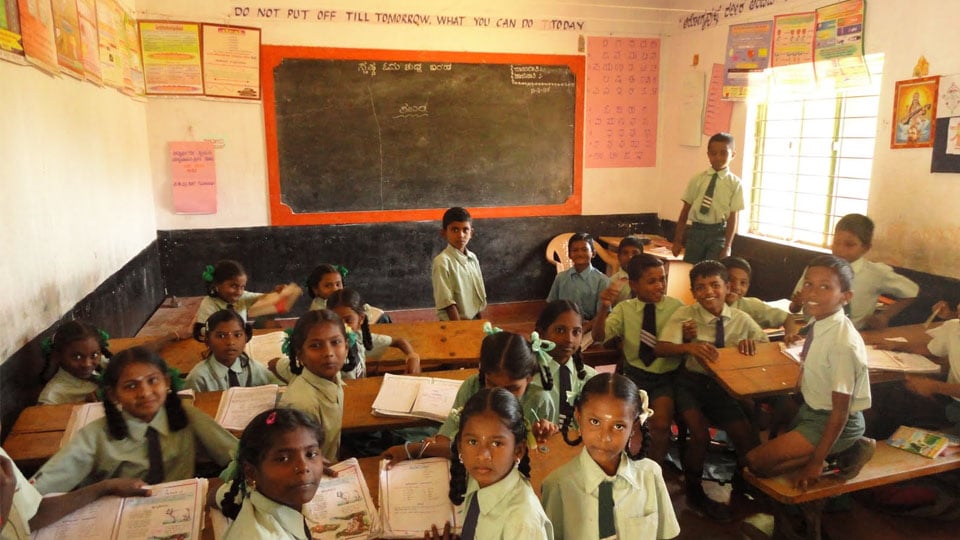 Bengaluru: The Kannada Development Authority (KDA) has urged the State Government to issue an order making it mandatory to admit children of employees of State Government and people’s representatives to the State-run and aided Schools as the student strength in these institutions are dwindling.

A High Power Committee headed by KDA Chairman S.G. Siddaramaiah submitted a report on Monday to Chief Minister Siddharamaiah with 21 recommendations on ‘strengthening and providing quality education’ in Government and aided schools.

In its recommendations, the Committee has suggested that by taking such strong steps, the Government Schools will be able to match the neighbouring private schools. The teachers who have been trained in English should start teaching it from first standard itself in a meaningful way. The private schools should be stopped from collecting capitation fees and conducting interviews and entrance tests for students and parents during admissions. The practice of admitting 25 percent of students under RTE (Right To Education) and the Government paying for them should be stopped forthwith. The same money can be used for development of Government Schools, the Committee has recommended.

All English medium private schools must compulsorily get recognition from the State Government, not only this, but every year it must be renewed. Action must be taken against such schools according to rules. An atmosphere has to be created in Government Schools where the children can be sent without any apprehensions regarding their safety. Hence, all Government School buildings lying in neglect should immediately be repaired and the vacant posts in such schools filled urgently, it said.

The Committee has recommended that in all Government Schools LKG and UKG classes must be introduced and to improve the quality of education at least one teacher in each subject be appointed. To convert Anganwadi centres as children’s play schools, basic facilities, must be provided.

The textbooks for children should reach the schools at least two weeks before the schools begin. The books must be based on the Constitution and have a solid foundation that reflects equality, freedom, secular and broad outlook, free from exploitation and a conflict-free society, it stated in its report.

Chief Minister Siddharamaiah, after receiving the report, said that the Ministers and others talk about Government Schools but if they admit their children to such schools then lot of problems could be solved.

Day by day, the craze for private schools and English language is increasing. This attitude can be seen even among the poor. The Supreme Court has given a ruling on giving education in mother tongue. A decision will be taken in this regard after holding a meeting, he said.

The children who go to Govt. Schools belong to lower section of the society and if proper education is not given to them, then the economic disparity will increase creating an imbalance in the society, said the CM.