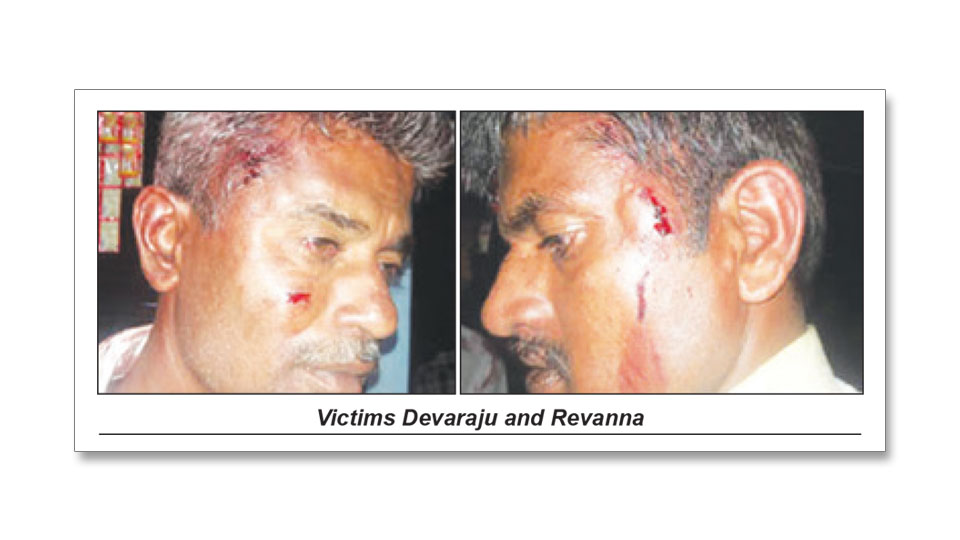 Mandya: A group of miscreants who barged into a dhaba at Sriramanahalli near Nagamangala last evening, not only created havoc there but also brutally assaulted the owners of the dhaba.

The injured owners have been identified as Devaraju and his brother Revanna.

It is alleged that one Shabari of Nagamangala, along with about 15 persons, barged into Lakshmi Dhaba on Mysuru-Nagamangala Road at about 7 pm yesterday, picked up a quarrel for petty reasons with Devaraju.

As wordy duel ensued, the miscreants allegedly attacked Devaraju with lethal weapons injuring him. Devaraju’s brother Revanna, who saw his brother being attacked, rushed to his help only to be brutally assaulted by the miscreants.

The miscreants are also accused of destroying furniture, vessels and other things in the dhaba and also snatching away the gold chain worth about Rs.1 lakh from Devaraju.

Nagamangala SI Satish Nayak, who rushed to the spot, inspected the place and registered a case based on the complaint given by Devaraju.

It is learnt that on Monday night at about 11, a group of miscreants including Shabari, had created havoc for not serving them food and had destroyed glass jars and bottles in the dhaba. Following the intervention of others, the group was fined Rs.5,000 for the damages caused by them, which is yet to be paid. But yesterday, the group barged into the dhaba and brutally assaulted the owners.

Political rivalry suspected: Meanwhile, it is suspected that yesterday’s attack on Devaraju and Revanna was politically motivated.

During the last elections, Devaraju and Revanna had campaigned for MLA N. Cheluvarayaswamy who was in JD(S) then.

But as the MLA is now with Congress, Devaraju and Revanna are said to have not supported Cheluvarayaswamy as they are still in JD(S) and supporting it and it is suspected that this could be the reason for the MLA followers to brutally assault the dhaba owners. Interestingly, the assault took place just after a few minutes of Cheluvarayaswamy’s visit to dhaba, which has led to the suspicion.