Home » Feature Articles » On a mission to feed the hungry 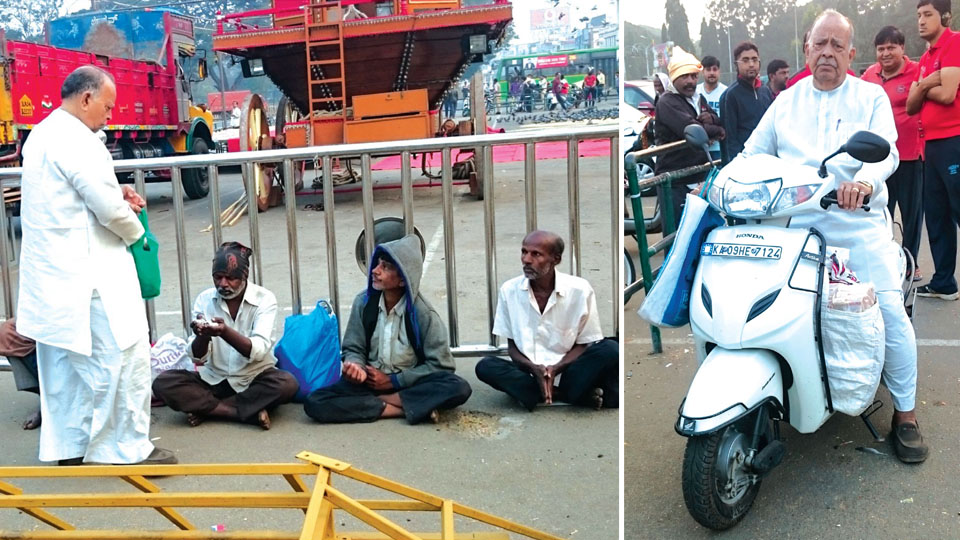 On a mission to feed the hungry

While most people of his age and below prefer to sleep till the sun rises, 70-year-old M. Lalith Kumar Kothari Jain, a resident of Thyagaraja Road in K.R. Mohalla in city, wakes up at 4 am every day and gets ready to feed the poor, the needy and the strays.

He says: “God has given me everything and what is the use of earning money when it is not useful to someone in distress or hungry.”

Lalith Kumar, after his prayers, a long walk and yoga session, sets off on his scooter to purchase food packets comprising chow-chow bath, rice bath, idli and vada from one Najundappa, who owns a hotel on Basaveshwara Road and from Lakshmi Tiffanis, popular as Mallesh Hotel on Thyagaraja Road.

Lalith Kumar, who owns Manik Bankers on Thyagaraja Road, has been offering food and sometimes clothes to the poor and the needy in city since over 15 years.

Armed with about 80 to 90 food packets and about 250 biscuit packets packed in huge bags and suspended on his scooter, the septuagenarian first heads towards Thyagaraja Road Sai Baba Temple, Raghavendraswamy Mutt at Krishnamurthypuram, Raghavendraswamy Temple near Shanthala Theatre and proceeds towards Kote Anjaneyaswamy Temple. At each stop, he hands over the food packets to the needy people who wait for him regularly. From there, Lalith moves to Doddakere Maidan and parks his scooter there. Seeing him, one may wonder what this man does in the open ground. He just presses his scooter’s horn and lo, a pack of about 25-30 dogs come from all directions and stand near him, wagging tails with ears bent. 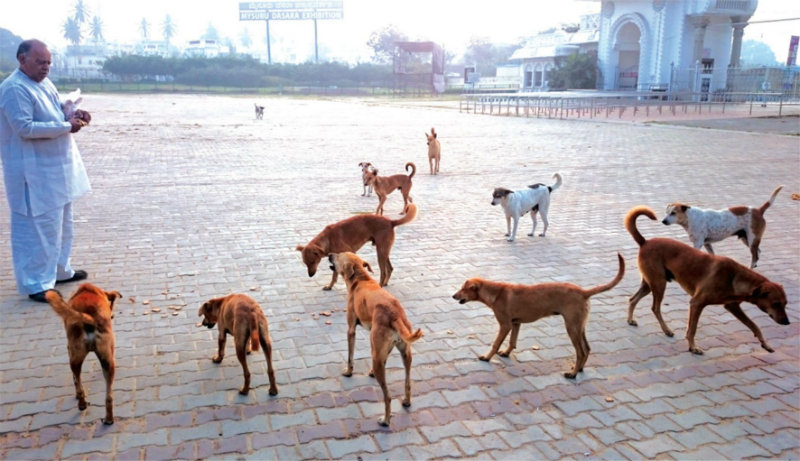 Lalith Kumar then opens another bag containing about 300 biscuit packets and feeds about 25 packets to these friendly canines while another pack of about 40 dogs wait for him near the Dasara Exhibition entrance gate. Lalith Kumar also makes sure that no plastic covers or biscuit pack covers are littered in places he feeds. For this purpose, he carries an empty bag where he puts all the empty packets and takes it with him for safe disposal.

People who feed the homeless and the destitute have to possess many skills. Among them is the flair for responding to irate and often violent critics. The best way to respond to an irate person is to remain silent and smile at them, Lalith says adding that a gentle smile would calm an angry person and remaining silent would not lead to arguments.

Lalith Kumar travels about 35-40 kilometres in city feeding the hungry, concludes his work for the day at about 11.30 am as he returns to the places where he had offered food packets and collects the leftover which is fed to other animals.

This good Samaritan is focusing his attention on the plight of the hungry and strays and doing his best to feed as many hungry mouths as possible and has also constructed a small concrete tank near his shop for the cattle to quench their thirst.