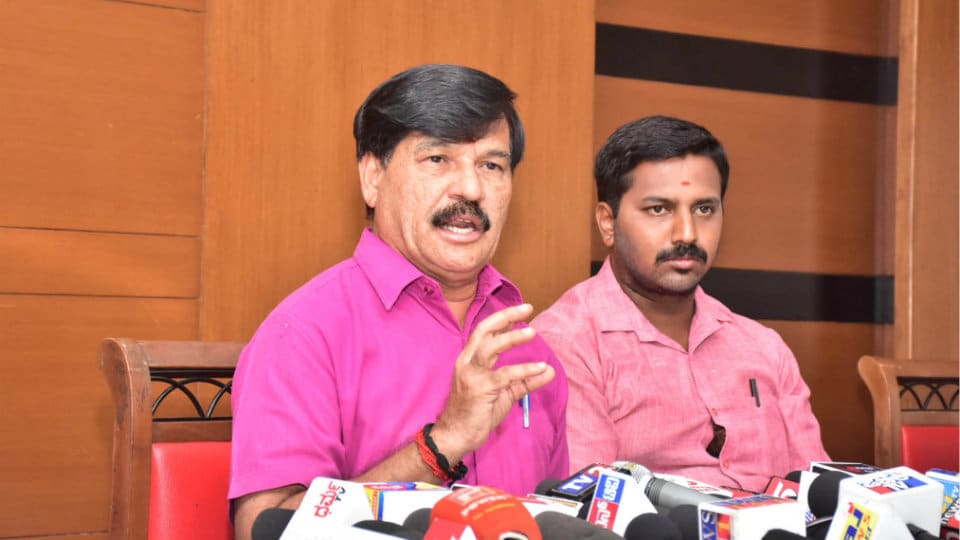 Mysuru:  Just a day after the polling for Mysuru-Kodagu LS seat ended, Krishnaraja BJP MLA S.A. Ramdas has alleged blackmail by some persons posing as journalists.

Addressing a press meet at a private hotel in city this morning, Ramdas said that in the run up to the elections, one M. Pradeep alias Madhu Kumar, claiming to be a Mysuru reporter of a weekly tabloid run by one Ramesh, tried to contact him repeatedly over phone over the last 3 months.

As his efforts to contact him (Ramdas) failed, Pradeep contacted Dr. Madhu who is working as a doctor at a Government hospital. Ramdas and Dr. Madhu knew each other.

“As I was busy with polls, I couldn’t respond to Dr. Madhu’s calls who called me many times. Later, Dr. Madhu sent a message on Apr. 10 saying that he wants to talk on personal issues faced by me and my brother and wanted me to come to a farm house (owned by Madhu) at Mosambayyanahalli where the issue could be settled,” Ramdas said.

The MLA said, “Next morning, Dr. Madhu calls me and asks to settle the issue for Rs. 25 lakh as a price to prevent the tabloid from printing my personal stories. Dr. Madhu also said that 10,000 copies of the tabloid carrying reports on me and my brother’s personal issues will be printed on the morning of Apr. 15 and as such I should settle the issue immediately.”

“On Apr. 15 morning a copy of the tabloid was thrown at my office at Vidyaranyapuram and my personal assistant lodged a complaint with the Kuvempunagar Police. After the complaint was lodged, I laid a trap and called Dr. Madhu and informed him that I would pay Rs. 5 lakh as advance and asked Dr. Madhu and the reporter (Pradeep) to come to the farmhouse at 4 pm on Apr. 15. But in turn, Pradeep asked me to come near a Community Hall in Jayanagar, where I had come with Rs. 50,000 and covered it in a paper bundle making it to look like Rs. 5 lakh,” Ramdas explained.

As Pradeep and Dr. Madhu reached the spot, the Kuvempunagar Police, who were waiting, arrested Pradeep and was remanded in judicial custody while Dr. Madhu was let off on station bail, Ramdas said.

He alleged that apart from Pradeep, Ramesh, M.B. Sharath Kumar, Cheluvaraju, Shekhar Babu and M.N. Rajashekar were involved in the racket. All of them were absconding, Ramdas said and demanded a thorough probe. The MLAs personal secretary Muddukrishna was present at the press meet.