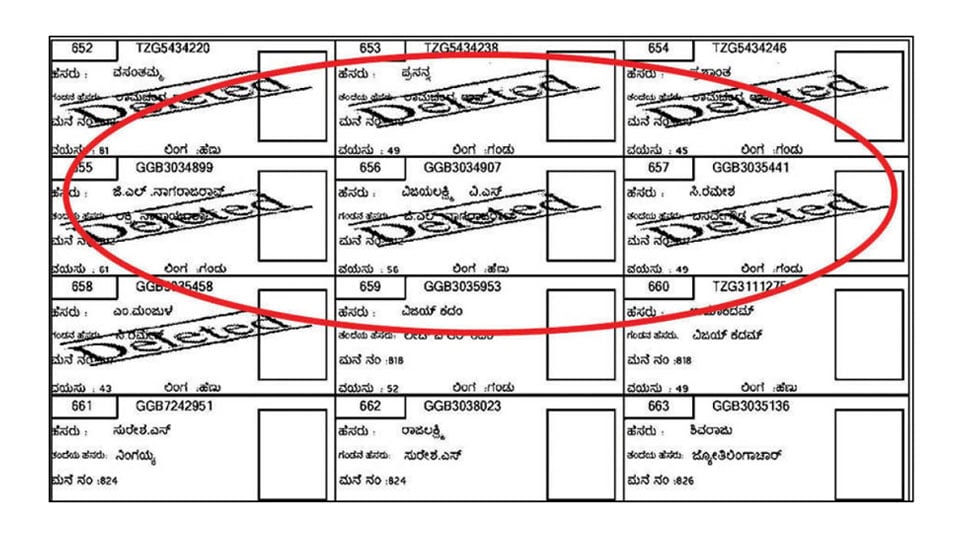 Mysuru:  The issue of voters’ names going missing, a common complaint, returned to haunt this Lok Sabha elections too, particularly in several areas of Mysuru. A substantial number of voters holding ID cards issued by the Election Commission could not exercise their franchise as their names were missing from the voters list, mostly in Chamaraja and Narasimharaja Constituencies.

These residents, who regularly voted and had not changed                their residences, were livid that their right to vote has disappeared into the black hole of official apathy.

Hundreds of voters complained that though they had voter ID cards they found their names simply had vanished from the voters’ list at the polling booth. Some were angry while some said they felt “they were unimportant”. “We have been the residents of the same area since many years and we have voted in the last Assembly elections and the elections held for Mysuru City Corporation and how come our names have been deleted now,” voters questioned.

One Prashanth, who was “denied” his right to vote said, “I am a permanent resident in Chamaraja Assembly Constituency and seven members of my family hold ID cards issued by the EC but our names were deleted in the electoral list.” He, however, refused to attribute any particular party for not finding his family members’ name in the voters list. The same was the case of his neighbours whose names were missing in the electoral list.

Many voters went to the polling booths at Chamaraja and Narasimharaja Constituencies only to find that although their names and photos were intact on the referral list, the word “deleted” was marked against their names.

READ ALSO  22 candidates each in fray from Mysuru-Kodagu & Mandya

Even in Bengaluru, many voters found their names missing from the electoral list and blamed the Election Commission and its officers for the lapse. Meanwhile, the BJP lodged a complaint with Chief Electoral Officer for Karnataka Sanjiv Kumar and demanded a probe.

Election Officers, however, say that deletions were done after officials found that voters were not staying in the said address. All suo-motu deletions were done before Jan. 16, 2019, when the final rolls were published. We repeatedly asked citizens to check for their names on the list. But most of them only turned up on the polling day and complained, they said.

Admitting that there were complaints about missing names, Sanjiv Kumar said they would be looked into and a probe will be ordered. No en masse deletion of names has happened after the summary revision in January, he said.

The Election Commission must hold a probe and take action against the officers who have conducted the area survey and who have deleted the names. He alleged that this was a conspiracy to defeat BJP candidate Pratap Simha.

Corporator K.V. Sridhar has also said that the names of the voters were deleted as part of a conspiracy and the District Electoral Officer must clarify. Though many awareness programmes have been held to increase voter awareness, they serve no purpose if the names are missing from the voters list, he said.