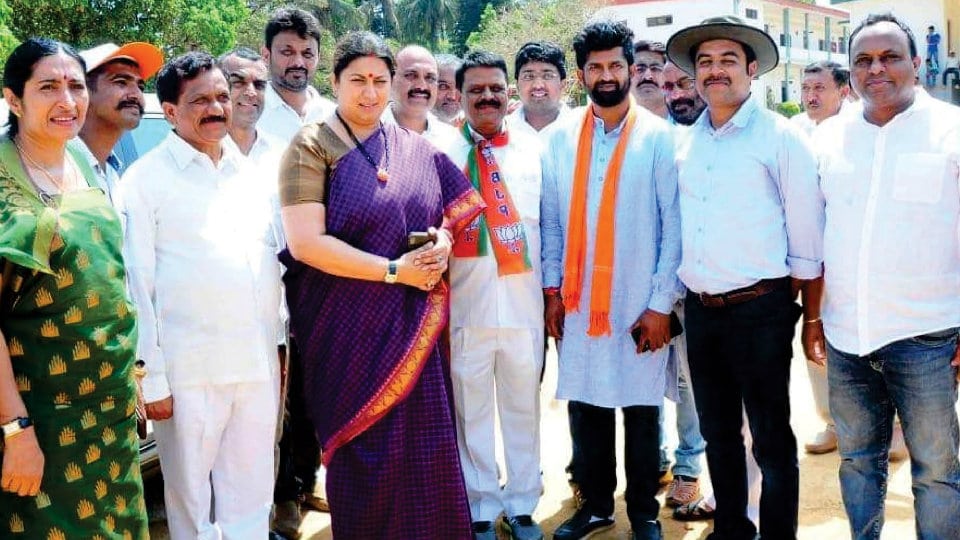 Gonikoppal:  Union Textile Minister Smriti Irani, who is contesting against Congress President Rahul Gandhi at Amethi in Uttar Pradesh, was in Gonikoppal yesterday to address a massive election rally at the Government High School Grounds here.

In a scathing attack on Congress and JD(S) coalition government, she said that the people are being fooled jointly by the coalition partners who are safeguarding their family interests. “All the Opposition, though there is stiff competition and infighting among them to occupy the Prime Minister’s chair, have cobbled up an alliance to defeat Modi. This itself shows PM Modi’s strength,” she said. “Ministers of the coalition government, including the CM, took to streets when I-T raids were carried out on corrupt contractors. It is a remote-controlled government run by contractor lobby,” she charged and said that each vote was important to keep the corrupt, anti-national forces at bay.

Choice for the country’s development

“The Parliamentary elections are not about the re-election of Prime Minister Modi but about making a choice for the country’s development. Modi had achieved in five years what the Congress could not in 55. People of the country were deprived of the fruits of development while Congress leaders, including the Gandhi-Vadra family, prospered under the Congress rule,” she charged.

Deviating to religion, the Union Minister said, “Those who submitted an affidavit questioning the existence of Lord Rama in the Supreme Court are now moving around in Ayodhya during the election. Those who had spent time in foreign countries are now having darshan of River Ganga, fearing Modi,” she said.

On terrorism, she said that the previous UPA government had followed a soft approach in tackling terrorism. However, the Modi government has given a befitting answer to those who support and nurture terrorism by giving special powers to the Armed forces to eliminate terrorists in their own land. During UPA rule, the Armed Forces were denied many opportunities to destroy terrorist camps, she said.

“People of Kodagu belong to martial race and they have sacrificed their life for safeguarding the country. The people of Kodagu would not have imagined that a day would come when a Congress leader would dub the Chief of Army Staff a “goonda” or seek proof for retaliatory action and belittle their sacrifices,” she said.

Attacking Rahul Gandhi for criticising GST, she said, “Rahul Gandhi is an unscientific man who will impose same tax for liquor and rice. The Congress does not want development of the country. They want citizens to beg before them. All these years they have fooled us and please don’t give an opportunity for them to fool us again,” she appealed.

Smriti Irani said that Congress was synonymous with corruption. Without naming the late Prime Minister Rajiv Gandhi, she said that “a prominent Congress leader” had stated that out of every single rupee released for the poor from Delhi, only 10 paisa reached the beneficiary. “What the Congress did not spell out was where the remaining 90 paisa went, but people of the country know better about who benefited.”

“Five years ago, the poor could not enter the portals of the banks. Today, through Jandhan Yojana, bank accounts have been opened for the common man. About 1.4 crore bank accounts were opened in Karnataka.”

“There were critics who had slammed the PM when he announced that government subsidies would be directly transferred to individual bank accounts, lest they be siphoned off by middlemen. The critics said the poor did not have access to bank accounts. The poor were intentionally denied bank accounts and this has been the legacy of 55 years of Congress rule. There were eight crore fraudulent bank accounts detected and closed as they were siphoning off taxpayers’ money from the government’s treasury,” she said.

Under the Ujjwala scheme, LPG cylinders were distributed to seven crore poor families in the country, including 28 lakh from Karnataka. “Contrast this with personal enrichment of Congress leaders even as the people of the country were left behind and deprived of the benefits and fruits of development during the 55 years of Congress rule,” Smriti Irani said.

On the occasion, Mysuru-Kodagu BJP candidate Pratap Simha listed out his achievements in the past five years. He said that the Modi government has contributed to the development of the region that was neglected by the previous Congress MPs.