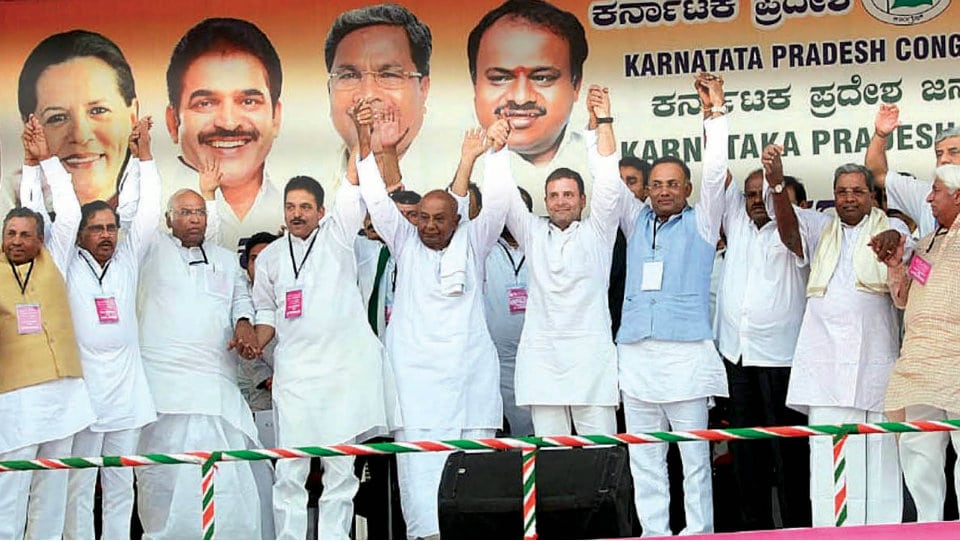 Bengaluru: “Prime Minister Narendra Modi, before the 2014 elections, had given a false assurance to everyone of Rs.15 lakh in their kitty. However, through Congress’ Nyuntam Aay Yojana (NYAY) scheme, nearly 20 per cent of the poor will get Rs. 72,000 per year in their bank account. This scheme will benefit nearly 5 lakh beneficiaries. In the next five years we have schemes that will completely eradicate poverty in the country,” promised All India Congress Committee (AICC) President Rahul Gandhi.

In the last five years no schemes have been provided to the small traders, businessman and farmers that would benefit them. The BJP government at the Centre has worked for the development of only 15 industrialists. In the Rafael deal violating all norms, Rs. 30,000 crore has been put into the pocket of Anil Ambani. The loans of 15 industrialists amounting to Rs. three lakh crore have been written off. However, when it comes to farmers’ loans, Modi and Finance Minister Arun Jaitley say that they do not have money to waive off their loans thus advocating a dual policy, he said.

He was addressing a joint public election rally of Congress and JD(S) at the Bangalore International Exhibition Centre (BIEC) in Nelamangala near Bengaluru yesterday and attacked the Modi Government.

A crowd of nearly one lakh had been waiting for more than two hours in the hot sun and Rahul Gandhi apologised for his late coming at the beginning of his speech and called upon the Congress party workers to work for the victory of all JD(S) candidates. Similarly, the JD(S) workers should also work for the victory of Congress candidates, he urged.

There is no dearth of money in the country. There is money with the Centre to give to people like Vijay Mally, Nirav Modi, Mehul Choksi. However, there is no money for the farmers, labourers and for development of education and health, he criticised.

BJP State President B.S. Yeddyurappa picks the money from the pockets of the common man and farmers and gives BJP leaders Rs.1,800 crore. Once our Government comes to power, then the farmers and the poor will get Rs.6,000 per month through NYAY scheme, he reiterated.

Demonetisation was a big disaster as they picked money from the pockets of the people. After this the Gabbar Singh Tax (GST) was introduced which again brought misery to every businessman. But if we come to power, then from 2019 onwards very simple tax at low rates will be introduced, he said.

Even though many schemes like Make in India, Start up India were introduced, the unemployment rate has gone up. By giving the keys of all the banks, he asked his friends to loot them. Karnataka is a modern capital in the country and the rules for starting new industries will be eased.

Former Prime Minister H.D. Deve Gowda in his address said that by forming a coalition government in Karnataka, a clear message has been sent to the people how such a government can function. Unable to bear the success, Prime Minister Narendra Modi is attacking the Mahagathbandhan. This rally has been organised to carry all parties and by including all religions together. BJP is responsible for implementing Section 144 and destroying peace in Jammu and Kashmir.

Former Chief Minister Siddharamaiah addressing the rally said that they had come together to keep the communal forces at bay. Modi is making all efforts to come back to power and hence all secular forces must unite. Modi is a Chowkidar only for the rich. The BJP government has failed to create jobs in the country. In his five years administration, Modi has undermined democracy. Under the BJP administration, Dalits are living in fear. Hence, in this election, people should vote Congress, JD(S) candidates, he added.

Modi is a big liar: This mega rally has been organised during the Lok Sabha election to send the message of unity to the country. It is very essential to have a Congress-led government in the next five years at the Centre. Hence, the people of Karnataka should come together to strengthen the hands of Congress. One should not be fooled by Modi as he is a big liar, said Chief Minister H. D. Kumaraswamy, while attacking Modi.

5 COMMENTS ON THIS POST To “Complete poverty alleviation in next five years: Rahul Gandhi’s promise”