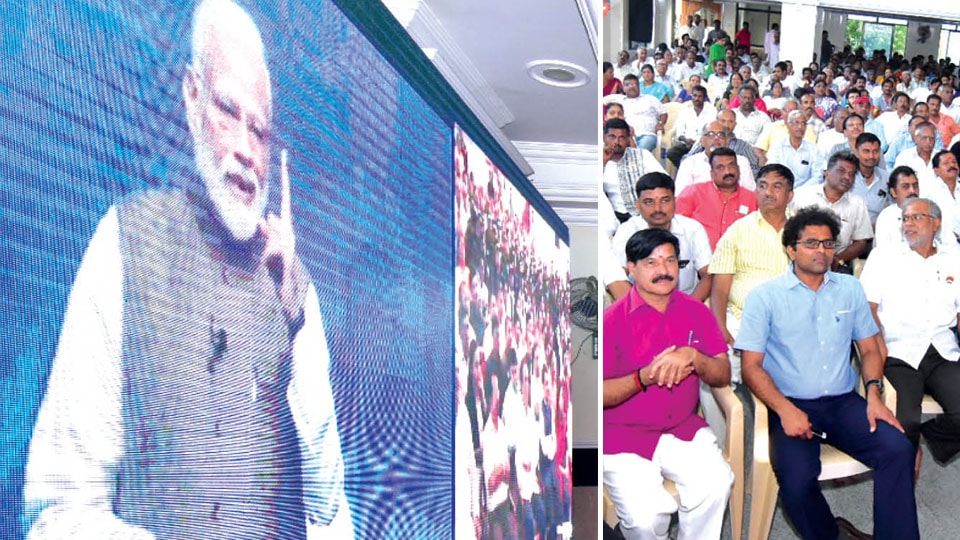 At Main Bhi Chowkidar interaction, Modi says Garibi Hatao has been a Congress Jumla for the past 70 years

Mysuru: At one of his biggest electoral outreaches of the 2019 Lok Sabha poll campaign last evening, Prime Minister Narendra Modi kept the focus on the issue of national security, his efforts at rooting out corruption and his agenda for the next five years. He said the nation did not need Rajas and Maharajas and it made him happy that the spirit behind chowkidar (watchman) is expanding.

At the close to two-hour Main Bhi Chowkidar interaction with a packed audience at Delhi’s Talkatora Stadium, streamed live on television channels and at select auditoriums in cities across the nation, the PM tried to convey that the people of India had already made up their mind to return the chowkidar to power on May 23.

Addressing the gathering before Modi’s interaction, former Minister S. Suresh Kumar said that Modi was the watchman of the entire country that is one family for him. “Modi has kept up his promise of being Pradhan Sevak and has brought in many development works in since the last five years. Unable to digest the fact that the country has progressed so far, the Congress leaders, who are like fish out of water without power, have branded Modi as Chowkidar Chor Hai. A befitting reply has been given to the Congress by countrymen who have said Chowkidar Sher Hai, he said.

“Apart from making India safe from enemy attacks, Modi has given as much as Rs. 9 lakh crore rural credit, which is more than ever before. For the first time, the Centre has set aside Rs. 15,000 crore for interest subsidy,” Kumar said. “The spirit of Chowkidar is growing and the Opposition is resorting to lies,” he said.

Suresh Kumar asked the party workers to consult the facts put out on NaMo app to dispel Opposition’s “lies” and reach out particularly to first-time voters. Modi said he had delivered on the promises made in 2014 of protecting the taxpayers’ hard-earned money by being an honest chowkidar.

In his address, Modi said in five years he brought those who looted people’s money to the threshold of jails and now needs people’s blessings to put them behind bars. The PM said his objective would be to strengthen the education sector.

Modi said, “We should be aware of false poll promises. Some parties who know they won’t get into power, are making endless fake promises.” He further lashed out at the Congress party for the Garibi Hatao Jumla and said Garibi Hatao has been a Congress Jumla for the past 70 years.”

According to the BJP, the event was seen at 500 venues  across the country through video conferencing, and the PM took questions from audience watching the speech across the country. Amid frequent chants of “Modi, Modi,” the PM said he devoted his first term to fill the ditches and potholes in the system, and would build “grand buildings” on these in the forthcoming term.