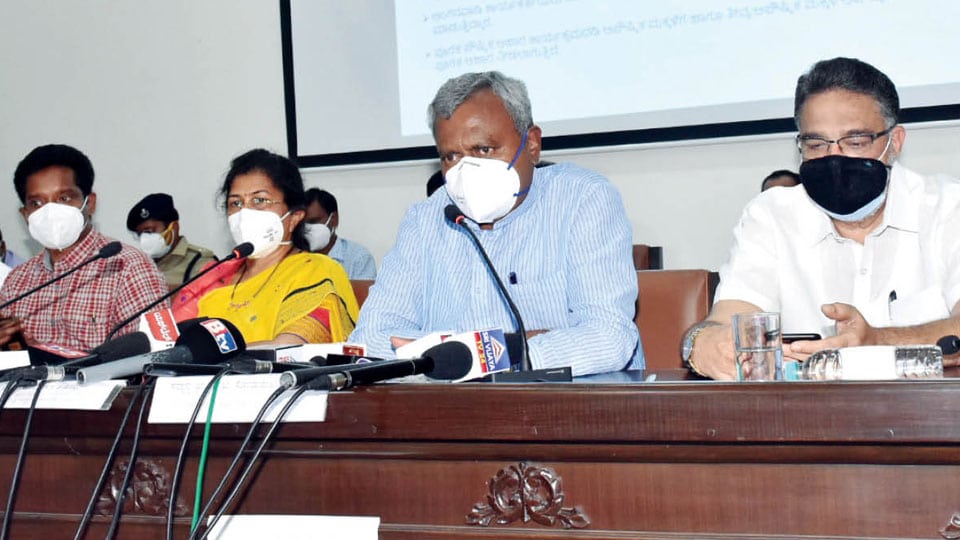 Mysore/Mysuru: Cutting across party lines, City and District legislators complained about lack of concern among officers of the Department of Women and Child Development and their utter negligence to inform the elected representatives about the number of kids orphaned due to second wave of COVID-19 pandemic in the district.

At the COVID-19 review meeting held at Zilla Panchayat auditorium here yesterday, the MLAs brought to the notice of Women and Child Development Minister Shashikala Jolle about lack of sensitivity among the Department officers in the  current crisis.

It was high time the officers must pull up their socks in the wake of warning by experts about the possible third wave of COVID-19 which is likely to impact kids, they said.

Krishnaraja MLA S.A. Ramdas said the Department officers did not have details about the total number of children who have lost both their parents and those who have lost either one of them. In his Constituency, there are 13 such cases and he was visiting those houses to console them. No officer from the Department accompanied him. In total, the Department was not at all responding to people’s problems.

Narasimharaja MLA Tanveer Sait sought to know the number of paediatricians in city and district and how many of them are in Government and Private Hospitals. Reports say about the shortage of paediatricians in Mysuru district, but this has not been brought to their notice. Need of the hour was to constitute a committee of experts to take preventive steps, he said.

Chamaraja MLA L. Nagendra said that people were under distress due to Corona and it was said that third wave of COVID-19 may hit. Every hospital in City and District must be geared up to open Children’s ward. In current second wave, most of the casualty has been reported from rural areas and it has affected a large number of kids too.

The Government Hospitals have around 15 paediatricians and around 150 in Private Hospitals. This number of doctors may not be sufficient to handle if the situation goes worse. It was better to train MBBS students on line of treatment so that their services could be utilised in case of emergency.

Hunsur MLA H.P. Manjunath said Mysuru City became the hub of Corona due to lack of preparedness for the second wave. The Government must get into preparation mode before it was too late.

T. Narasipur MLA Ashwin Kumar pointed out that none of them have information about the number of paediatric wards in Hospitals. He said people will rebel if the Government fails to take adequate steps to protect the health of children.

Based on inputs, the Minister Shashikala Jolle directed the officials concerned to start preparation for third wave from by consulting elected representatives. “Officers here are no negligent that they have not provided information about the orphaned kids asked two months ago. I have come here not to play. Officers are totally unresponsive. I am disgusted with their behaviour. Don’t tarnish the Government’s image,”   she said. Later, wheel chair and medical kits were distributed    to children.

READ ALSO  Lone SARI case in Mysuru a cause of worry

No shortage of medicine

The role of Department of Women and Child Development is very crucial in third wave of Covid-19 pandemic. The required medicine must be stocked in advance after consulting experts. There is no shortage of funds in any Department, but officers must work with dedication”. — MLC A.H. Vishwanath

Opponents sit next to each other

Political opponents MLC A.H. Vishwanath and K.R. Nagar MLA S.R. Mahesh sat next to each other and spoke during the meeting.  A comment by MLA Tanveer Sait made them  smile.

K.R. Nagar MLA S.R. Mahesh praised DC Dr. Bagadi Gautham and said the number of meetings has decreased after he assumed office and the DC was available to officers and elected representatives. Everyone is working happily. This is what every MLA was expecting, he added.