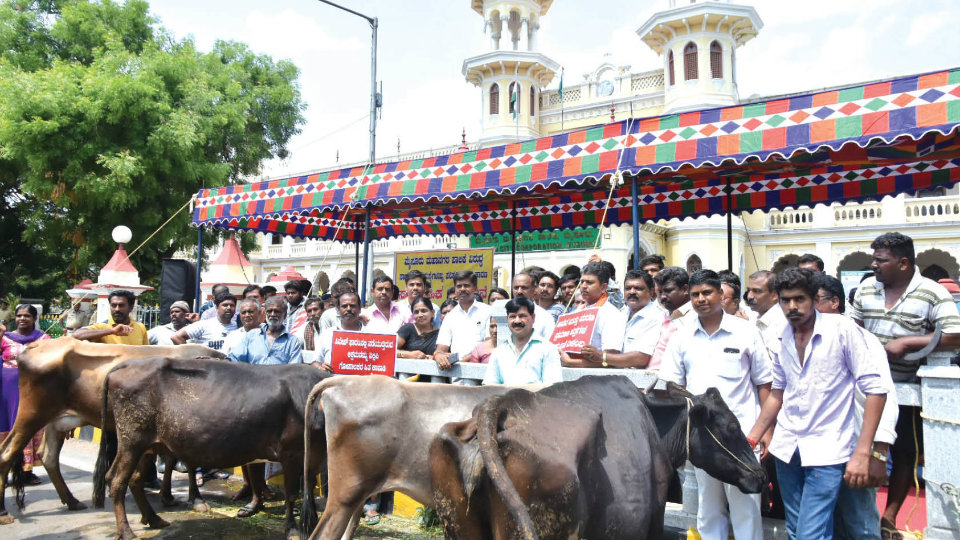 MLA’s protest with cows against MCC

Mysuru: Accusing the MCC of being apathetic in addressing civic issues, KR BJP MLA S.A. Ramdas, supported by a host of associations and organisations, staged a day-long demonstration in front of the MCC office here today.

Ramdas brought nearly a dozen cows to the venue to register his protest.

Alleging that the MCC had failed to clean vacant sites although it had collected a cess at the rate of Rs.2 per sq.ft. for the purpose, Ramdas urged the MCC to open an exclusive ESCROW account for inviting global tenders and get the sites cleaned of bushes, wastes etc., at the earliest, as uncleaned vacant sites had become home to dangerous creatures.

Claiming that the Vidyaranyapuram Sewage Farm, which was established by the erstwhile Mysuru rulers for growing fodder (grass) to the cattle, had failed to meet the purpose now, Ramdas alleged that over 7 lakh tones of wastes is lying unprocessed in the Waste Treatment Plant, which has posed a serious       health hazard to residents in the neighbourhood.

Alleging corruption in the MCC, the MLA urged the Commissioner to crackdown on corruption and to ensure that public grievances and civic issues are addressed at the earliest.

Submitting a eight-point charter of demands to the MCC, Ramdas warned of filing a criminal case against the Civic Body if it failed to act on the issues raised by him.

Members of Mysuru Gopalakara Sangha, Tax-Payer Associations and other groups took part in the protest.

Corporators B.V. Manjunath, Shivakumar, Sunanda Palanetra and others were present.

MCC MLA S.A. Ramdas
Mango and Jackfruit Mela in city from May 24
Bandipur Safari to operate from Melukamanahalli Gate from June 2