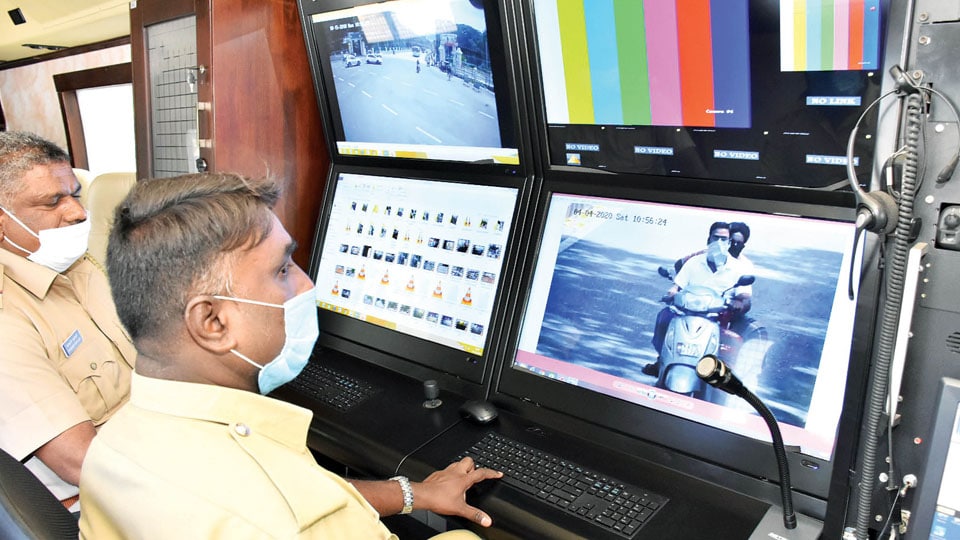 Mysore/Mysuru: Following the success of crowd monitoring and managing during Dasara, the Mobile Command Centre vehicle is now keeping a hawk-eye vigil on the movement of vehicles during the Coronavirus nationwide lockdown period. Photographs of violating vehicles are being clicked and challans, notices are being served to the homes of violators.

The hi-tech Mobile Command Centre worth over Rs. 2.5 crore, having Pan-Tilt-Zoom Camera, four fixed cameras, 10 wireless detachable cameras, and one Drone camera is keeping a close watch on the roads and areas that have been declared sensitive. Instead of stopping violating vehicles, cameras are capturing the to and fro movements of the vehicles. Repeat violators are easily caught.

The advanced vehicle has LED display screens and the information of violators is transmitted to the Traffic Command Centre at City Police Commissioner’s Office from where the notices are being sent. The Mobile Command Centre can monitor the vehicles, capture photos and record videos from a distance of one kilometre clearly.

The vehicle moves around the city and is stationed at strategic places like Government Ayurveda Circle, Dairy Circle on Bannur Road, Maharaja’s College Road, Moulana Abul Kalam Circle, FTS Circle, Udayagiri Circle, Mandi Mohalla and other areas. The Command Centre helps surveillance and is equivalent to thousand eyes within a large area. It has all the features of a Police Control Room and is on the move to capture all the action, live at all the places wherever it is stationed. “People come out of their homes giving reasons of health, essential supplies and emergency. We are tracking the movement and are penalising them. Repeat violators are closely being watched,” said a Police officer.

The Mysuru District Administration has enforced Disaster Management Act following the directives from the Centre for consistency in the application and implementation of various measures to fight the killer virus and to ensure maintenance of essential services and supplies.

The Ministry of Home Affairs invoked the Disaster Management Act, directing the Ministries or departments of Government of India, State and Union Territory Governments and authorities to implement the measures laid down in the Central order. The measure restricts residents’ movement outside of their homes and orders a closure of all offices, factories and shops, except those considered as essential goods and services.

The Act also empowers the District Administration and the local city corporations to take criminal action against people who obstruct government servants, Police, health workers and paramedical staff from discharging their duties to combat COVID-19. Criminal cases can be booked against such persons and they can be jailed under the provisions of Disaster Management Act.