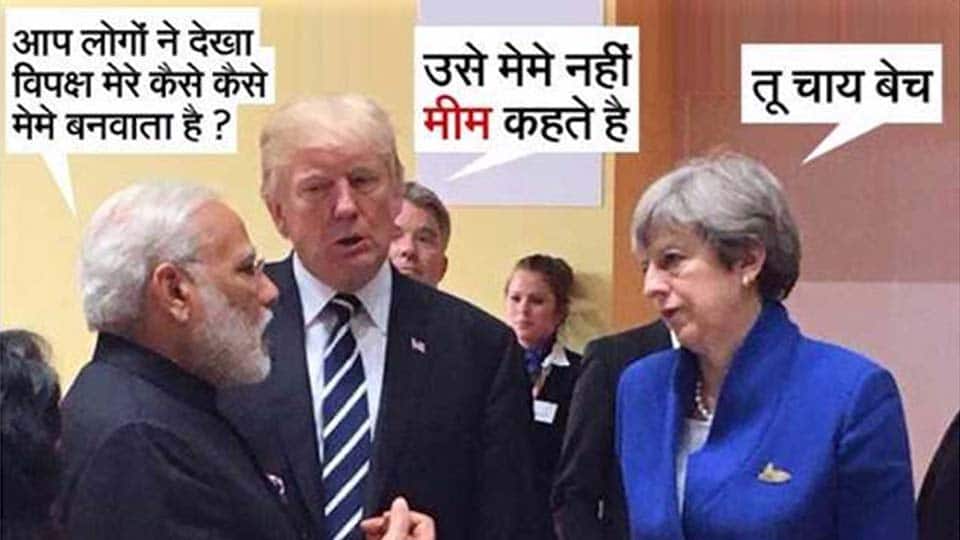 On reading about the new controversy over mocking Prime Minister Narendra Modi by showing him as mispronouncing the internet vocabulary meme, I decided to know more about it. I went to the internet:

An Internet meme, pronounced MEEM, is an activity, catchphrase or piece of media which spreads, often as mimicry or for humorous purposes, from person to person via the Internet. The majority of modern memes are captioned photos that are intended to be funny, often as a way to publicly ridicule human behaviour. An Internet meme may also take the form of video, website or hash-tag.

The word meme was coined by Richard Dawkins in his 1976 book The Selfish Gene, as an attempt to explain the way cultural information spreads; Internet memes are a subset of this general meme concept specific to the culture and environment of the Internet.

The Congress has hurled itself into a new controversy over mocking Prime Minister Narendra Modi as a ‘chai-wala’.

On Tuesday, the party’s youth wing posted a meme, on its official twitter handle ‘Yuva Desh’ in which PM Modi is mocked. The meme has a caricature where PM Modi is standing with US President Donald Trump and UK leader Theresa May. The blurbs of dialogue show the PM mispronouncing “meme,” who then is corrected by Trump, and  May dismissing the PM by stating, “You stick to selling tea.”

The ruling party has said that the offensive post (now deleted) exemplifies the Congress’ elitist mindset and that an enraged public will punish it by ensuring the BJP sweeps the upcoming election in Gujarat.

Congress spokesperson Randeep Singh Surjewala said the party “strongly disapproves and rejects such humour.” His tweet also said, “Differences on policy and opinion aside, Congress culture imbibes respect for PM and all political opponents.” For once, Congress has risen above the petty politics.

In 2014, ahead of his thunderous victory, Modi was derided as a tea-seller who can never be PM by Congress leader Mani Shankar Aiyar at a huge party gathering. “Narendra Modi will never become the Prime Minister of the country… But if he wants to distribute tea here, we will find a place for him,” Aiyar had infamously said. And he had to eat his words when Modi became the Prime Minister. Wonder, why Modi forgot to thank Aiyar for his contribution for BJP’s victory.

In his campaign, Modi, offering his credentials as a self-made leader, stressed the fact that he sold tea as a child on trains to help support his family. His modest origins helped contrast him with Rahul Gandhi, whose role at the centre of the Congress is owed entirely to his last name and the power it wields within the party.

Small wonder, if there is a hidden design among the Congress stalwarts who claim credentials of Harvard, Cambridge education and of royal lineage to make Rahul Gandhi The  Bahadur Shah Zafar of Moghul empire!