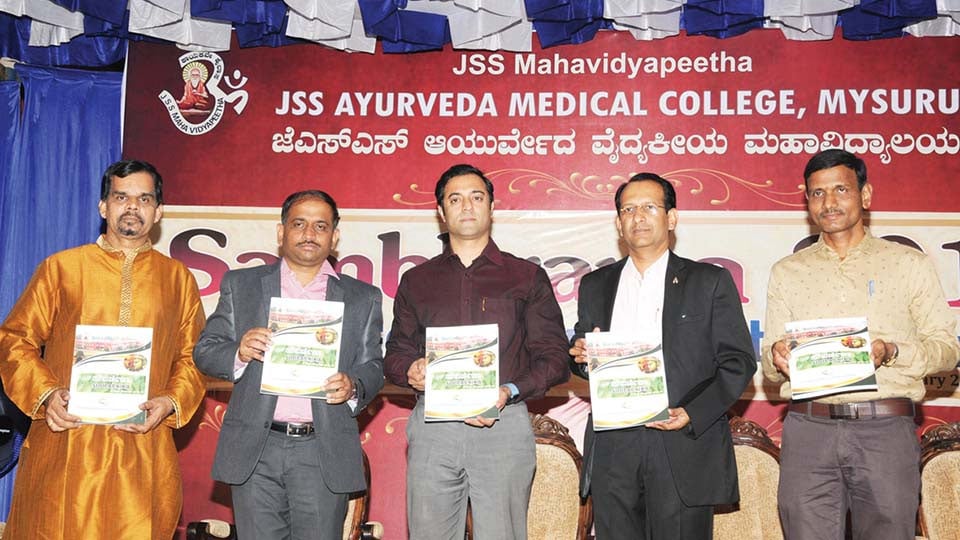 ‘More and more people opting for Ayurveda these days’

Mysuru: More and more people are turning into Ayurveda these days and the traditional medicine system has become popular among masses, said Star of Mysore and Mysooru Mithra Managing Editor Vikram Muthanna. He was speaking as the guest of honour at “Sambhrama 2019” College Day celebrations of JSS Ayurveda Medical College at Alanahalli in city on Friday.

“In 1999, one of the Directors of Himalaya Pharmaceuticals in Bengaluru had told that in 20 years people will return to Ayurveda. His words have come true and many people are opting for Ayurveda system of medicine,” he said.

“World-wide, Ayurveda is an eight billion dollar industry. Today everyone wants to lead a healthy life and Ayurveda is a way of healthy life. Companies like Himalaya and Patanjali have played an important role in globalising Ayurveda products,” Vikram Muthanna opined.

Complimenting the student-achievers of the college, he said that it was a matter of pride to see the achievements of students. He added that students must have a cordial relationship with their teachers.

Director of Medical Education Division, JSS Mahavidyapeetha R. Mahesh mentioned about the three-day Star of Mysore Education fair organised recently at Maharaja’s College Grounds and said that thousands of students and parents and teachers got immense benefits at the fair. “Star of Mysore provided a platform for educational institutes to directly interact with students and parents under one    roof,” he said.

“Several countries have established health-related mega industries and opportunities are aplenty. At the same time, competition too is tough. Students must face competition in a globalised environment and only a leadership outlook and proficient subject knowledge will help bail out students,” he said.

College Principal Dr. Rajesh A. Udapudi, administrator Vikas Nandi and others were present during the occasion.