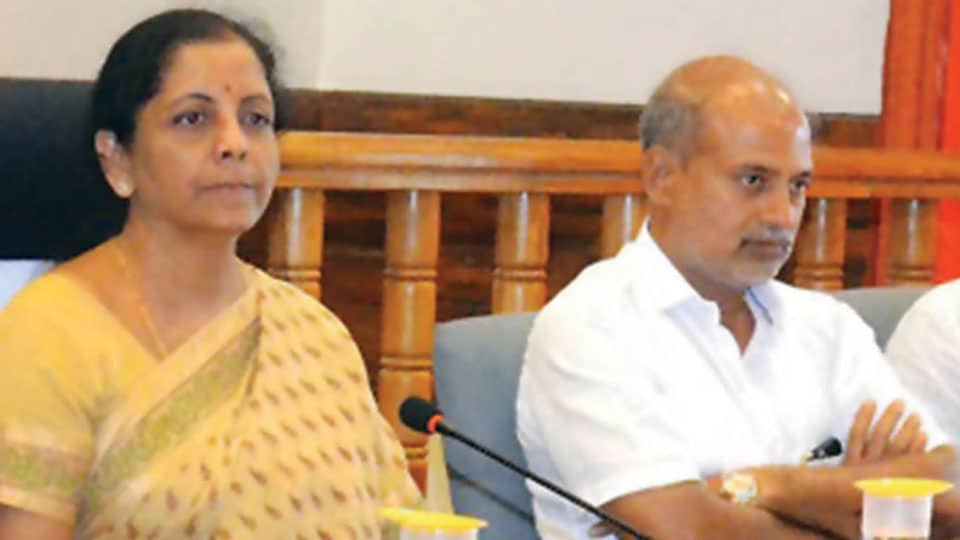 Our Defence Minister visited Kodagu district to take stock of the situation and see how the Defence personnel were performing. Unfortunately, her visit became more about her ego than about Kodagu disaster.

By now we all know about Defence Minister Nirmala Sitharaman’s outburst at the press conference. But what caused this? It seems, when the Defence Minster was taking too much time talking with some ex-servicemen, Kodagu District Minister S. R. Mahesh politely suggested that it would be better if she first finished meeting with the Field Officers so they can go back to their rescue duties and after that she can give more time for the veterans. This irked the Union Minister and by the time she sat before the media she was seething and heard saying, “Central Minister follows the District Minister here. Unbelievable!”

In an attempt to end the embarrassment, Mysuru-Kodagu MP Pratap Simha informed Sitharaman that the microphones were turned on, to which the angry Minister said, “Let it get recorded,”  and in a mocking tone and sarcastic expression told the media “record karloo.” In this episode, S.R. Mahesh came out as a mature leader. He was respectful of the Union Minister even when she was not.

In the end, what did Kodagu get from Sitharaman’s visit? Rs. 1 crore from MP Fund, Rs. 7 crore from the military CSR Fund while her behaviour made us question if she had the right ‘temperament’ to be a Defence Minister?

It’s ironic that the same Defence Minister, when Rahul Gandhi asked about the Rafale deal said, “I don’t want to satisfy Rahul Gandhi’s ego and reveal details of avionics.”

Well, she doesn’t want to satisfy Rahul Gandhi’s ego, but she wants S.R. Mahesh to satisfy her ego by being a subservient State-level Minister and follow the Great Union Minister who has descended from Delhi?

Luckily, Chief Minister H.D. Kumaraswamy has a better temperament. He publicly apologised for the “inconvenience” caused to her and reminded her that “I believe this is the time for all of us to forget small differences and forgive each other and join hands for the rehabilitation of the flood-affected people in Kodagu.”

Kumaraswamy has always been one of the few political leaders with the right temperament for politics and has the ability to see the bigger picture.

This ego clash of Ministers reminds one of the clash between the giants of Indian politics Vallabhbhai Patel and Nehru that Ramachandra Guha recalls in his book India After Gandhi.

It seems in December 1947 Nehru was supposed visit the riot-hit town of Ajmer but at the last minute he called off his trip and sent his Personal Secretary instead.  Vallabhbhai Patel, who was the Deputy Prime Minister and also the Home Minister was upset and wrote to Prime Minister Nehru that since the Home Ministry had sent its own enquiry team to Ajmer, the tour of the Prime Minister’s underling implied a lack of faith in his Ministry.

Nehru replied explaining that he could not visit Ajmer himself because of a death in the family but since the people in Ajmer were expecting him, he did not want to disappoint them and so sent his Secretary. Nehru then added saying that since he is the Prime Minister he had the right to go wherever he wished, whenever he wished or even send anyone he wished to represent him.

Patel replied that in a Cabinet system the Prime Minister was merely the first among equals; he did not stand above and dominate his fellow Ministers. This ego clash about protocol and political status got so ugly that both leaders offered to resign! But then they decided that Gandhiji should mediate!

On 30th January 1948, Gandhiji met only Patel and asked that he and Nehru sort out their differences. He then told Patel that he would meet both him and Nehru the next day and left for a prayer meeting. But alas that next day never came as Gandhiji was shot dead when he was going out for the prayer meeting.

But what happened next shows the quality of our leaders of the past.

After Gandhiji’s death, Nehru wrote to Patel saying, “With Bapu’s death, everything is changed and we have to face a different and more difficult world. The old controversies have ceased to have much significance and it seems to me that the urgent need of the hour is for all of us to function as closely and co-operatively as possible.”

Patel replied, “I fully and heartily reciprocate the sentiments you have so feelingly expressed. His death changes everything and the crisis that has overtaken us must awaken in us afresh realisation of how much we have achieved together and the need for further joint efforts in our grief-stricken country’s interests.”

Yes, great leaders too have an ego, but what makes them Statesmen is that they know when to put their ego aside and see the bigger picture —  The Nation.

Luckily, our CM Kumaraswamy saw the bigger picture, sadly the Big Minister from Delhi didn’t. But then they say ego has a blinding effect.