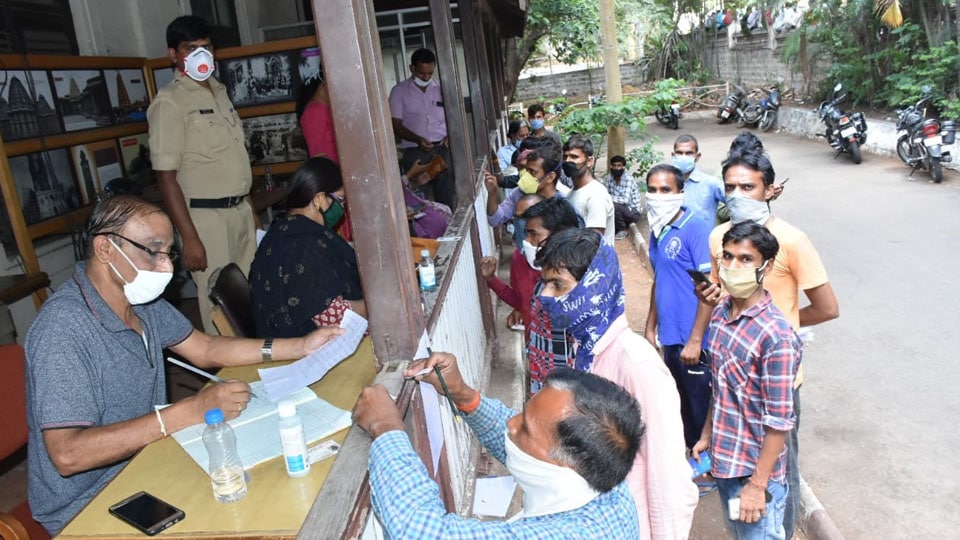 Mysore/Mysuru: More than 2,000 people, who had applied for Movement Pass (both one way and two way) to go back to their native places or to bring back their family members stuck in other places thronged City Police Commissioner’s Office in Nazarbad this morning to give their details and obtain the Pass.

Also, many migrant workers from Bihar, Madhya Pradesh, Rajasthan, Orissa and other places, who are involved in construction and other works in city, also thronged the Commissioner’s Office. They were seen waiting outside the Police Commissioner’s Office to give their details thinking that the lockdown had ended and they would be sent to their native places in special trains.

Meanwhile, a desk has been established at the Police Commissioner’s Office and Police personnel were seen registering details on their mobile phones and ledgers.

The Police personnel are collecting their Aadhaar Card numbers, copy of their Voter’s Identity Card and other documents before issuing the Pass to people or to inform the workers about the train facility etc.

Police sources said that Movement Pass would be issued to the migrant workers who would like to go to their native places in their own vehicles and for others, messages pertaining to train timings (State wise) would be sent to their mobile phone numbers. The Police personnel are collecting their names and their phone numbers.