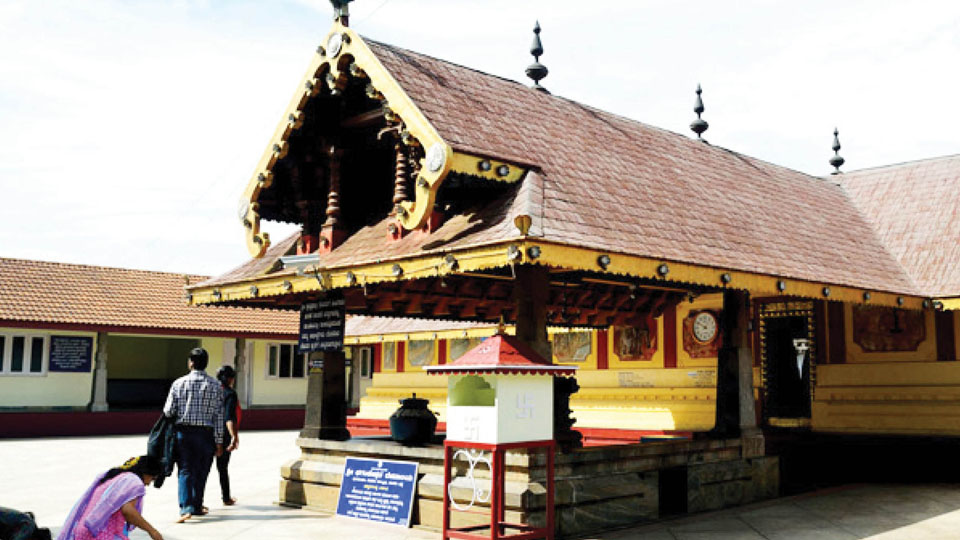 A few months back I went to my ancestral house in Kodagu and also availed the opportunity to go to the nearby Igguthappa Temple — dedicated to Lord Shiva. It is the most famous temple in Kodagu located at the foothills of Thadiyandamol near Kakkabe. This deity is considered the God of rain and grain (ಮಳೆ-ಬೆಳೆ). Understandable, Kodagu being an agricultural land of hills and valleys. A land of heavy rains and rich forests.

There in the temple was a senior priest, talkative and gently assertive, overseeing the puja proceedings and general conduct of the devotees. Being in a secluded place surrounded by greenery of paddy fields, coffee estates and forests, the rush of visitors is only during festival days.

As usual, I engaged the priest in a brief conversation standing at the front outer door, as only those who follow the specified ritual practice (vrata) are allowed inside for maintaining madi (sanctity).

Listening to his chatter was both an education about the temple and the local people, a majority of whom are Kodavas. I would like to share one episode he narrated from his experience at the temple.

It happened that once a person went to the temple at a time its doors were being closed. When the person asked this priest to oblige him saying he had come from outside the district, the response was negative with a reprimand. Recognising him as a Kodava, the natives of Kodagu, the priest told him that the temple was of Kodavas, for Kodavas and run by the Kodavas. And for centuries, it was managed and patronised by that native community. Yet they, like this person, do not observe the temple tradition and work to develop it.

I am inclined to agree. Though at present the temple is open to all, it has a Kodava family by name Paradanda as Devathakka (care-takers of the deity) to manage its religious functions.

Since the dim past, the Pattedara (Head) and the Thakka (the spokesperson) of that family (Paradanda) has been responsible for temple pujas, rituals, festivals including Kailpoldh and Puthari, fairs, astrological predictions etc. Of course, times have changed, it is now alleged that a group of Bhaktas is trying to sideline the Paradanda family from this position which is hereditary.

The person said, ‘Of course, I would help’ and suggested that sculptured stone reliefs with images representing Kodava customs, festivals, etc., could adorn the outer walls of the temple.

‘Who would spend money for it?,’ wondered the priest, still adamant refusing to open the door just for the darshan of the deity.

“What’s your name?” asked the priest.

The person, already at the tether end of his patience, simply said, “My name is Bhakta !”

“Bhakta? Not a Kodava name,” the priest said with a derisive smile and added, “anyway, you may come tomorrow.”

The next day, to the person’s surprise, the priest had already spoken to the President of the Temple Management Committee and the President was waiting.

Anticipating a bonanza of a donation, the priest, as was his wont, paid special attention to him in performing puja, offering aarathi and theertha.

As the person was about to leave, the priest beckoned him to meet the President to talk about the wall plaques he had talked about the previous evening. The person began explaining his idea in english, a language he was proficient with, but the President suddenly objected and said, “Being a Kodava, you must speak in Kodava language.”

The person, taken aback, shot back: “If that is so, why should you have an english name Charlie?” That one bullet-like shot made President Charlie shut his mouth.

That ended their conversation and also the hope of the priest deeply dedicated to the temple. Whatever it was, I saw beautifully carved stone plaques, embedded on the outer walls, as if to assert the fact that primarily it is a Hindu-Kodava temple.

Recently, there was a news report about non-conventional practices at this temple being objected by the Devathakka. Modern constructions too have come up all around the temple. The stone pavings around the temple premises looks good and enables easy maintenance. But, during summer, these stone slabs get very hot for the comfort of the devotees who traverse that area barefoot, specially those who circumambulate the temple after worship. They must be allowed to wear socks or provide walk-way carpets around the temple.

Be that as it may, to this day, nobody knows who is that generous donor of those beautiful, sculptured stone plaques. The identity seems well wrapped in mystery inside an enigma. However, the donor must be a Bhakta, devotee, of Lord Igguthappa. I believe that those who donate anonymously are like divinity — invisible.

2 COMMENTS ON THIS POST To “Mr. Bhakta visits a temple in Kodagu”