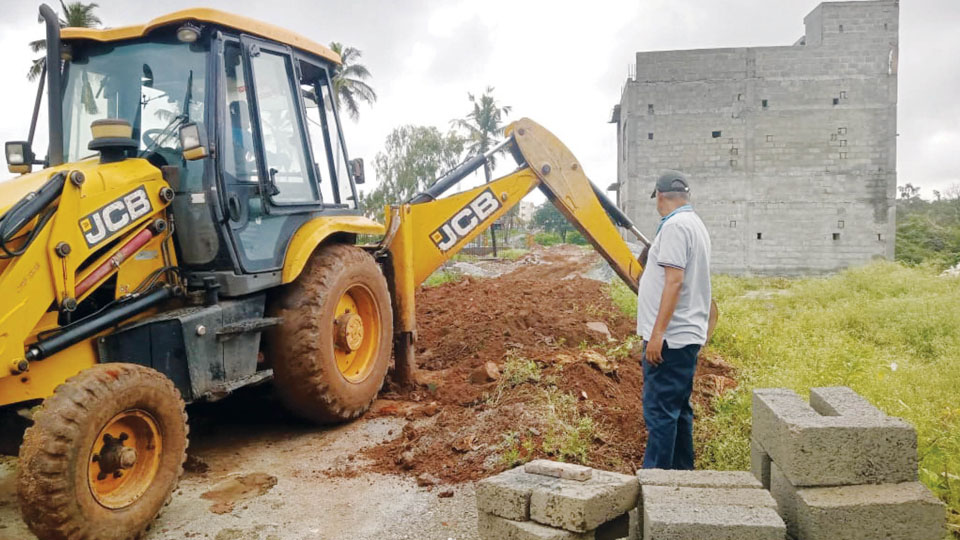 Mysore/Mysuru: In one of the biggest anti-encroachment drives in recent years, the Mysuru Urban Development Authority (MUDA) on Saturday reclaimed the land on which four unauthorised private layouts had come up. The four layouts had come up on lands coming under Sathagalli Survey Nos. 65, 27/3 and 2/3 and Devanur  Survey No. 25 in the taluk.

Some private developers had developed the four layouts and had allotted sites, without any change of land use certification issued by the Deputy Commissioner (DC) nor had any plan approval from MUDA, which is mandatory. One of these layouts had blatantly violated the rule by erecting unauthorised sheds on a public road at Sathagalli. Following complaints from the public, MUDA Commissioner G.T. Dinesh Kumar had inspected the spots last week. Subsequently, in an early morning operation on Saturday, the MUDA authorities reclaimed the lands by evacuating the unauthorised structures that had come up on the lands, thus sending out a message that there is no scope for illegal layouts.

Dr. Venkataraju also warned the public against buying sites and other landed properties without checking the documents at MUDA and other concerned Departments. Stressing on the need for a double-check and cross-check of documents, he said adding that the people will also have to get the documents verified for change of land use and MUDA approval.

Pointing out that private layouts are mushrooming in the outskirts of the city, he reiterated that the public must be doubly sure that the site or landed property that they are going to buy have clear titles. He warned that the people may lose their hard earned money if they fell into the trap of buying sites in layouts that are not approved by MUDA.

More than 40 such unauthorised layouts

It is learnt that there are about 40 such unauthorised in MUDA jurisdiction. Dr. Venkataraju said that MUDA Engineers visit the sites for making a check on change of land use certification and plan approval.

The engineers will suitably advise the land owners and developers for getting their records straight, if there is any violation of norms in layout formation. Even the site allottees too will be suitably advised. But still, some developers have resorted to illegalities, he said adding that the MUDA has information that there are 42 illegal layouts being formed in the city outskirts.

The MUDA officials will visit all these layouts and will make efforts to evacuate them in stages, if they are found unauthorised.

7 COMMENTS ON THIS POST To “MUDA reclaims four unauthorised layouts”