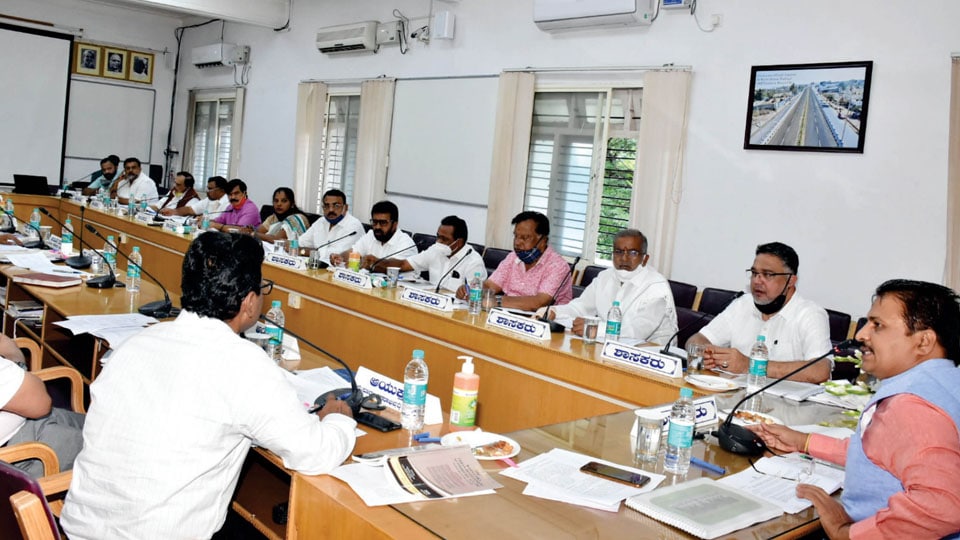 MUDA to constitute Sub-Committee for allotment of CA sites

Mysore/Mysuru: In a significant decision, the Mysuru Urban Development Authority (MUDA) has decided to form a Sub-Committee for allotment of CA (Civic Amenities) sites in city.

The decision was taken at the MUDA meeting, the first one held after H.V. Rajeev took over as the Authority’s Chairman, at MUDA Hall here yesterday.

The meeting resolved to form the Sub-Committee to be constituted by the MUDA Chairman, for allotment of newly identified 256 CA sites without any confusions or controversies.

Dasara grant: It was also decided to give Rs. 5 crore to the district administration for the conduct of Dasara. But MLC Marithibbegowda, who objected to the decision, suggested giving Rs. 2 crore as Dasara is being celebrated in a simple manner. But ultimately, it was decided to give Rs. 5 crore for Dasara celebrations, as agreed at the Dasara High Power Committee meeting chaired by Chief Minister Yediyurappa in Bengaluru.

COVID  Care Centre: During the course of the meeting, officials said that Rs. 90 lakh was needed for running the COVID  Care Centre, which MUDA has taken the responsibility. MLC Marithibbegowda said that MUDA has already donated Rs. 1 crore for COVID Relief Fund and as such it was not right to spend such a big amount on COVID Care Centre.

The MLC also pointed out that MUDA is yet to pay Rs. 200 crore relief to farmers who have parted with their lands for formation of layouts and as such money should be spent in a most judicious manner.

Officials clarified that MUDA had to take responsibility of running the COVID Care Centre as private organisations did not come forward for funding.

Title Deed: MLA L. Nagendra wanted MUDA to remove the hurdles in the issuance of Title Deed for vacant sites. Pointing out that site allottees are constructing houses merely as namesake  in one portion of the site in order to get Title Deed, Nagendra said that this practice had resulted in loss of lakhs of rupees to the site owners. He wanted MUDA to simplify the norms for issuance of Title Deed in respect of sites. He also sought organised and hassle-free allotment of houses to be constructed under Group Housing Scheme.

MCC Commissioner Gurudatta Hegde said that most of the layouts handed over by MUDA to the MCC were lacking in infrastructure. He wanted MUDA to complete all necessary infrastructure works before handing over the layouts to MCC.

As this was the first meeting under the new Chairman, MUDA members asked the officials to come up with complete and comprehensive details concerning all issues at the next meeting which is likely to take place in the first week of next month.